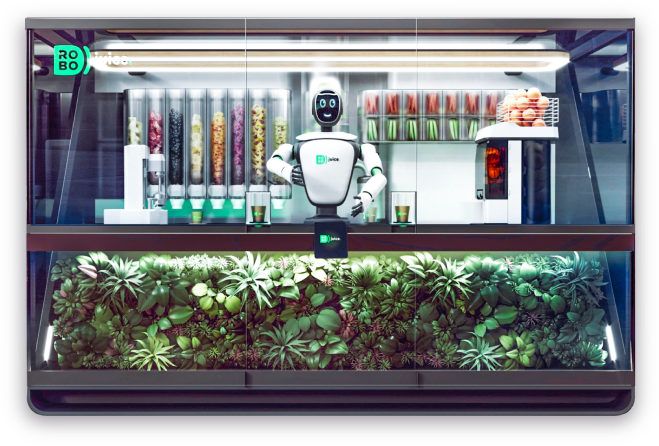 Smoothie-Making Robot Arrives at Metreon, Robot Asks To Be Tipped

A new smoothie-swinging robot is bringing the Metreon into the Age of Ultron, but oddly, the Stepford smoothie robot asks to be tipped for its services.

The gimmicky fad of getting your food or drink served by a robot has often fascinated San Franciscans, even if the popular launches of these machines does not always equate to long-term success. You’ll totally recall the little delivery robots in 2017 from now-defunct delivery service Eat24, robot butlers at fancy condos, and the robot security guards that knock over toddlers. Perhaps the most curious of these was the CafeX robot coffee shops, because they still charged the Healthy SF surcharge, despite being robots that do not need healthcare.

Another new San Francisco robot has arrived at the Metreon, and it is also asking for employment benefits. SFGate reports that a smoothie-making robot is at the Metreon, though, counterintuitively, this very much not-human smoothie-maker still asks for a tip.

“The humanoid-looking robot, with acrobatically long and twisty arms and a digital face, expectantly awaited my order,” Madeleine Wells explains at SFGate. “I made my selection on the POS screen — the aforementioned strawberry banana smoothie — typed in my phone number, and swiped my credit card. I was somewhat baffled by what came up next on screen: a prompt to add a tip. Did I really need to tip a robot?”

Never mind that you’re going to get a million more phone calls about “your car’s extended warranty” if you give that robot your phone number, why does the robot need to be tipped? Tips “would apparently go to the actual humans working at the company,”SF Gate reports, as the CEO of Palmetto Superfoods just happened to be there, indicating this was probably a press launch event.

ROBOjuice uses environment aware AI to learn and adapt to your menu. The system is programmed to identify ingredients and recognize inventory levels, while continuously calibrating to ensure error free operation.

Palmetto Superfoods is a real smoothie cafe, with locations in the Richmond and the Marina. The robot itself is made by a local company called RoboJUICE. So it maybe does make sense for an existing industry brand to bring in third-party robots, rather than some tech disruptor company trying their hand at making food and drinks.

“On a busy day at Palmetto, usually we don’t want a customer waiting more than five minutes for their order,” Palmetto co-founder Charles Lee said. “But on a crazy weekend day, which happens every weekend now, you can wait up to 30 minutes.”

“What the robot does is now people can get their bowls in a minute, a smoothie in two minutes.”

Have you been to Robojuice yet at Metreon? Come try their juices, smoothies, and açaí bowls! 🍓🥝🍍🍑🍌 pic.twitter.com/92UMJVfADE

Like most robot products, it seems a little oversold, not quite ready for market, and the goal right now may just be to attract investor attention. The product is still in beta, and SFGate reports “an error message popped up that the robot’s minders had to intervene to fix” during their session. Moreover, it’s just a temporary promotion. The Palmetto Superfoods smoothie robot is only at the Metreon on Fridays in the month of May, from Noon-5 p.m.

But the time might actually be right to automate service work. In the current job market, food and beverage service positions are difficult to fill, so there is much less of the dynamic of robots taking jobs. That may or may not be the case someday when we’re back to 10% unemployment.

But for now, these may be the droids we’re looking for to improve margins in the food and beverage sector. The only problem remains, despite the ballyhood labor cost savings, that robot-server companies still tend to not be successful long-term once the hype wears off.