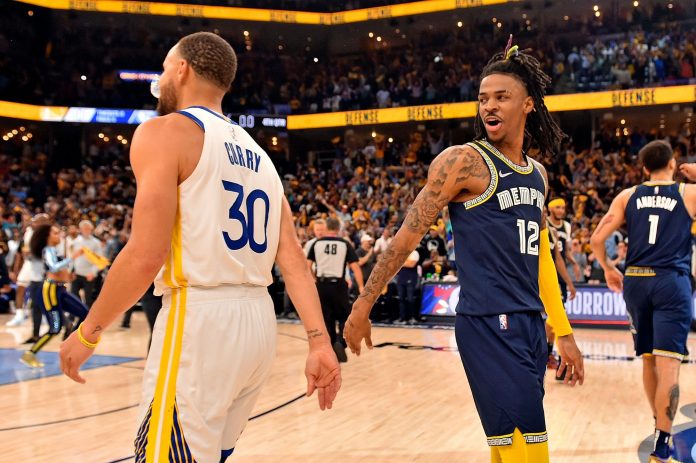 At one point last night, I wondered, “How are the Warriors still in this game?” Golden State was having an ice-cold shooting night against the Memphis Grizzlies, and were realizing their regular-season standing as one of the turniest-overest teams in the league. Still, the Warriors were scoring in the paint, Stephen Curry was, well, Steph Curry, and the Dubs were actually leading with about three-and-a-half minutes left in Game 2. For a moment, it looked like they might just squeak out another W.

But this time, Ja Morant could not be stopped. The Grizzlies’ mega-superstar in the making had 47 points on Tuesday, with some big buckets in the fourth quarter to take and retake the lead. Memphis took Game 2 106-101 to tie the Western Conference semi finals at 1-1. Game 3 is on Saturday at Chase Center in San Francisco.

This photo might say everything about Ja Morant in Game 2 last night in Memphis, Tennessee. Morant was also deadly from three-point range, going 5-12. (Photo by Justin Ford/Getty Images)

The game got off to a choppy start, rife with carnage.

Memphis was up 8-0 a few minutes into the first quarter when Gary Payton II had a break away to the basket — he went for the layup, with the Grizzlies’ Dillon Brooks in pursuit. Brooks “took a huge wind up,” missed the ball by a mile, and kind of squished Payton’s head, sending GP2 careening to the floor at an awkward angle. He put his left arm out to brace his fall, and compressed his forearm and elbow in a terrible looking way. Payton was in immediate and obvious pain, but managed to shoot two free throws before he left the game for the hospital, never to return — he suffered a fractured elbow, and it’s not yet clear how much time he’ll miss. (Is he done for the season?) GP2, who had found a post-season gear and was playing very well, will get an MRI today.

Dillion Brooks was ejected in the first three minutes of Game 2, and the scope of what constitutes a “flagrant 2” was thrust back into the spotlight with an entirely new context. Keep in mind that Draymond’s “foulee” on Sunday, Brandon Clarke, was just fine after the Game 1 collision that got Green kicked out of the game. (On Monday, the NBA said it would not reduce Draymond’s Flagrant 2, according to Sports Illustrated.)

Surely everyone expected last night’s game to be physical. After the first quarter, a sideline-reporter asked Steve Kerr something like, “Is that the kind of physicality you were expecting?”

At the postgame press conference, Kerr said, “There’s a code in this league that players follow, that you never put a guy’s season/career in jeopardy by taking somebody out in mid-air and clubbing him across the head. [Speaking of Payton:] This is a guy who’s been toiling the last six years trying to make it in this league, finally found a home, and just played his butt off this year and in the playoffs — this should be the time of his life, and a guy comes in and whacks him across the head in mid-air.”

Draymond also caught an elbow to the face early in the game, and left the game to get stitches, before returning in the second quarter. Green still had a swollen eye at the postgame press conference. (The elbow appeared to be accidental.) Steph Curry also got a cut on his hand, and play stopped while he got bandaged up. “I’m fine, it’s nothing,” he said at the postgame press conference. Ja Morant also took a blow to the head near the end of the first half, and appeared to be struggling with his vision for a few moments, before lasering in and going ballistic.

Stephen Curry had another solid, productive game last night, scoring 27 points and shooting 11-25 from the field and 3-11 from three. He had 9 rebounds and 8 assists. (Photo by Justin Ford/Getty Images)

The game finally assumed some flow, but it was a low-scoring first half. The Warriors were firing shots off, but not much was falling. Golden State shot 42% from the field in Game 2, and were an astounding 7-38 from three (that’s about 18.5%). Andrew Wiggins was 6-16 shooting and 1-7 from three for 16 points — Wiggs was a force on the boards, though, with nine rebounds. Klay Thompson had a tough night, shooting 5-19 from the field and 2-12 from distance for 12 points.

“We really tried to force it to happen tonight,” Steph Curry said of the Warriors’ three-point shooting after the game. “You can live and die by that in terms of hoping that the dam opens up at some point, and it obviously didn’t for us.

“It’s part of our nature,” said Curry about the Warriors wanting to put up threes. “It’s who we are and who we have been in terms of letting it fly all over the court. We gotta understand how to finish a game if we’re not shooting the ball well with the type of shots we’re trying to get.”

This writer thought that Klay might be due for a breakout night on Tuesday, but it wasn’t to be. Thompson struggled to find the bottom of the basket last night. (Photo by Justin Ford/Getty Images)

Otto Porter Jr. seemed to be around every loose ball while he was on the floor. He had 9 rebounds on the night. Jonathan Kuminga played 14 minutes on Tuesday and had 9 points and 5 boards — the Warriors out-rebounded Memphis 52-47 on the night.

Oh yeah, the turnovers. The Warriors gave up the second-most turnovers during the regular season with 1,221, which is roughly how many they had last night. In all seriousness, the Warriors gave up the ball 18 times to the Grizzlies 12. It’s probably fair to say that the Dubs will always play kind of fast and loose, and that a certain amount of giveaways are to be expected. If the Warriors had made even a few more shots — two three pointers, to be exact — then perhaps annoying reporters wouldn’t be printing turnover numbers.

Otto Porter Jr. was a rebounding machine on Tuesday in Memphis. (Photo by Justin Ford/Getty Images)

It was all Ja Morant in that last three-and-a-half minutes of the game. He made left- handed, scooping layup after highflying, left-handed scooping layup, and hit a go-ahead three pointer with two-and-a-half minutes left. Steph Curry kept driving to the rim and scoring, and it was a one-point game with about 30 seconds left to play. A Ja Morant floater in the paint felt like the emotional nail in the Warriors’ coffin.

“We let one get away in terms of some self-inflicted wounds with shot selection and turnovers — it’s gonna be a long three days with that feeling,” Steph Curry said after the game. “It’s in our DNA. We know what to do. That’s why a game like that, down the stretch, it’s a possession here, a possession there, and we feel like we should win those types of games.