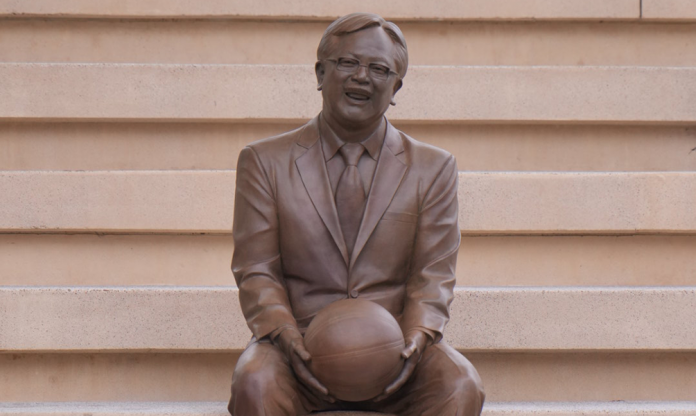 The Ed Lee Statue at Chase Center Has Been Unveiled

An Ed Lee statue now sits outside the Chase Center, an homage to the mayor who shepherded the arena’s approval and construction, and considered it his legacy project.

In honor of his vision and leadership in the construction of Chase Center. pic.twitter.com/4Et6Ixn9wg

The Golden State Warriors kind of went a different direction, with a statue to the dealmaker that helped get their arena built. On Thursday afternoon, on what would have been the man’s 70th birthday, the Warriors unveiled a statue to the late Mayor Ed Lee in the arena’s “Thrive City” area, as Bay City News reports.

A statue of the late San Francisco Mayor Ed Lee was unveiled Thursday by the Golden State Warriors and Chase Center to honor and remember him for his vision and leadership in the construction of the new arena. https://t.co/cmbcVUlgL4

“Mayor Lee loved the Warriors and what they meant to our city more than just about anyone I know,” Mayor London Breed said at the unveiling. “He led with compassion and humility and had the vision to know how important it was to build Chase Center. With the completion of this statue, his legacy will forever live on at Chase Center and with our beloved team.”

Today, on the birthday of the late Mayor Ed Lee, the Golden State Warriors unveiled a statue true to his character. Humble and warm. He was proud to serve our city and to bring the Warriors back to San Francisco. Happy birthday Mayor. We were lucky to have you. pic.twitter.com/lM3tTkRcUH

Okay, there are some nice local angles to the sculpting and construction of the statue. According to a release from the Chase Center, “The piece was sculpted in wet clay by artists Jonah Hendrickson and Deborah Samia at their studio in Alameda, and cast in bronze at the Art Works Foundry in Berkeley.” But if you would rather see a statue of a sort of unpopular former mayor at the arena instead of a historical great like Al Attles or Big Nate Thurmond, you are probably the kind of person who uses the Kaiser-branded name “Thrive City” in normal conversation.

Nice to see the Warriors honoring the late Mayor Ed Lee with a statue at Chase Center. But five years after pledging to better represent women in the city’s public art, San Francisco still hasn’t added a single one. https://t.co/oRqDFyqTqp

Ed Lee was a Warriors fan (though honestly, he did once mispronounce Steph Curry’s name, saying “You give Steve Curry an inch, and he might take Golden State a mile!”). But yes, Lee did help the Chase Center though the community opposition and legal challenges it faced before opening in 2019.

Ed Lee got a statue before Steph Curry. Somehow that doesn’t sound right

But for longtime Warriors fans, it still feels kind of wrong that San Francisco took the team away from Oakland. It’s not like attendance was lagging at the old Oracle Arena, the Warriors moved because they wanted an arena that had more luxury suites and millionaire amenities. As such, it is not as feared by opponents as was the old Roaracle Arena, where fans still showed up even during the lean years. It remains to be seen whether San Francisco fans show up during losing seasons.

Ed Lee’s statue is essentially an homage to removing the Warriors from Oakland. And considering that shoes are still dropping in the Mohammed Nuru scandal (remember, Lee appointed Nuru), new details could always come to light to make this statue even more awkward.

Related: ‘Thrive City’ Is the New Name for the Development Around the Chase Center, Thanks To Kaiser [SFist]