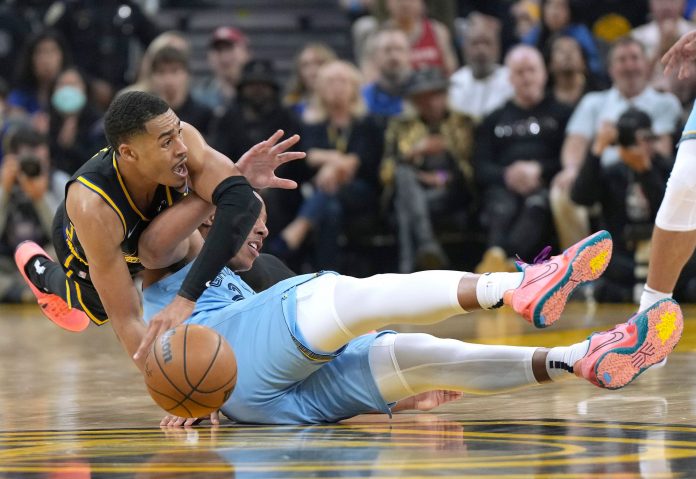 If you’re a Golden State Warriors fan, then the start of Game 3 last night scared the hell out of you. After shooting terribly in Game 2 in Memphis against the Grizzlies, the Warriors still nearly got away with a win. But the Dubs’ turnovers proved insurmountable.

On Saturday, it seemed like the Warriors would pick up right where they left off in Game 2, not turning the ball over so much as just passing it to Memphis. The Grizzlies started last night with white-hot shooting, including six made three-pointers in the first nine-ish minutes of the game. Memphis took a 21-8 lead about halfway through the first quarter, and it felt like Golden State was on the verge of an absolute disaster.

The Warriors had been scoring almost exclusively in the paint before the shooting started to click. Stephen Curry hit a three at the end of quarter one, and it was 28-26 Grizzlies. The Dubs led the entire second quarter by an average of 10 points, and if it wasn’t for a Ja Morant half-court buzzer-beater, the Warriors would have ended the first half with that margin.

Golden State had 12 turnovers in the first half, and just five in the second, which they dominated in every possible way. The shooting was spectacular, the defense stingy, and the victory decisive. The Warriors won Game 3 142-112 to take a 2-1 series lead.

Jordan Poole had 27 points last night, 4 rebounds and 5 assists in the Warriors’ hefty win over the Grizzlies. Poole also became embroiled in controversy over an apparent injury to Ja Morant. (Photo by Thearon W. Henderson/Getty Images)

Let’s talk about Ja Morant, who had another spectacular game last night, leading all scorers with 34 points but limped off the court in the fourth quarter with apparent right-knee discomfort — it’s the same knee that Morant tweaked this season which caused him to miss 25 games.

With under seven minutes left in regulation, Andrew Wiggins and Jordan Poole came out to mid-court to double-team Morant; the Warriors managed to poke the ball away, but Wiggins was called for a foul. On the replay, Poole can be seen grabbing Morant’s knee for a moment. At the free-throw line, Morant was in obvious discomfort, and left the game soon thereafter.

As of this writing, there’s no word on Morant’s status for Game 4 tomorrow at Chase Center. “The schedule does Memphis no favors,” the Washington Post said. Game 5, in Memphis, is on Wednesday and Game 6, if necessary, will be on Friday back in San Francisco.

“Hard fouls and hurt feelings” have already come to characterize the Warriors vs. Grizzlies’ series, and the internet is abuzz with accusations and comparisons to the other fouls, suspensions, and even the type of language used. Morant apparently tweeted “Broke the Code” — echoing coach Steve Kerr’s phrase aimed at Dillon Brooks after his Game 2 foul that caused Gary Payton II to fracture his elbow — along with video of the aforementioned play, but then deleted the post. (Several fans were wearing yellow buttons with GP2’s face and the text: “The Best Revenge is Winning.”) Grizzlies’ head coach Taylor Jenkins said, “Jordan Poole actually grabbed [Morant’s] knee and yanked it, which kind of triggered whatever happened. I’m going to be very curious to see what happens after that.” It’s not clear if Jenkins expects the league to review the play, or possibly dish out a suspension. (There’s no word on any such action.)

At the post-game press conference, Poole watched the replay of the incident on a phone for the first time in front of reporters, then said, “It was a basketball play. I hit the ball and I was going for the ball. Obviously, you don’t want to see anybody get hurt. I’m not even that type of player. Hopefully he gets better, and we can see him out there next game.”

Speaking about Jordan Poole, Steph Curry told reporters: “There’s no comparison to what Dillon did. It’s not a joking matter that Ja’s hurt, but all the rest of it is total B.S. in terms of the conversation right now.”

Ja Morant was despondent as he left the floor in the fourth quarter on Saturday, seeming to feel a mixture of pain and extreme frustration. (Photo by Thearon W. Henderson/Getty Images)

As a fan, it’s not always easy to enjoy the spectacular play of an opponent, but Ja Morant will make a believer out of anyone. Draymond Green recently said that Morant had been Michael Jordan-esque at times, and that he has “superstar-like abilities.” Last night, Morant made several gravity-defying drives to the basket, and was hitting three-point daggers seemingly at will (he was 4-7 from distance).

“How does he do that!?” exclaimed ABC announcer Mike Breen on a crazy, “Ja-mazing” shot.

Ja Morant driving to the basket last night against the Warriors’ Klay Thompson. Here’s to a speedy if not instant recovery for Morant. (Photo by Thearon W. Henderson/Getty Images)

The Warriors seemed to clean up all of the things that had plagued them in Game 2, especially “shot selection,” which had been a hot topic during the three-day break in the series. After having an atrocious shooting night on Tuesday, Klay Thompson had an ultra-efficient 21 points last night and was 8-13 from the field and 4-6 from three, along with 9 rebounds. About shot selection, Thompson said that he was “not being overly eager just to shoot the ball.”

“I don’t think he took a three in the first half,” Steph Curry said of Thompson. “It shows in the efficiency. I was the only one who brought the three-point percentage down,” Curry laughed. Steph was 2-8 from distance; the Warriors as a team shot 63.1% from the field and 53.1% from three — the former number was a near-playoff record.

Also due for a breakout shooting night was Otto Porter Jr., who had 13 points on Saturday and shot 5-7 from the field and 3-5 from three. “What was most impressive to me was his ability to rebound; he got some really great second-chance opportunities for us,” Thompson said of Porter Jr.

Andrew Wiggins also had one of his most efficient games of the playoffs with 17 points, shooting 7-10 from the field and a solid 2-2 from distance, to say nothing of a few big dunks. Speaking of a play where Wiggins got a rebound and went coast to coast for a dunk, Steph Curry said: “It’s not just for his confidence, it was a great play for all of us to get the crowd into it [and] to get out juices flowing — we love to see that come out of Wiggs.”

A record actually was set last night: Jonathan Kuminga became the youngest player to start an NBA game. He had an ultra-efficient 18 points in as many minutes, shooting 8-10 from the field and 2-4 from distance.

But Kuminga and Draymond Green each had four turnovers in the first half as part of the Warriors’ wobbly, scary start.

At 19 years old, Jonathan Kuminga is now the youngest player to have started an NBA playoff game. (Photo by Thearon W. Henderson/Getty Images)

Draymond, who was mic-ed up for part of last night’s game, was heard saying, “That’s our first turnover of the second half. It’s amazing what we can do when we don’t.”