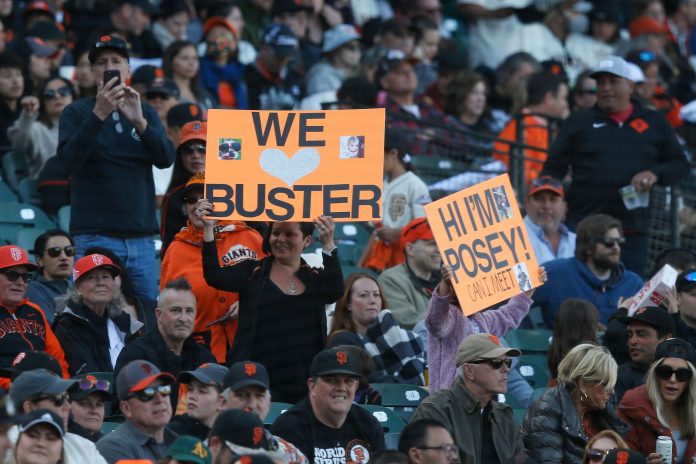 Buster Posey might be done with the Giants, but clearly, the San Francisco Giants and their fans are not done with Gerald Dempsey ‘Buster’ Posey III. On Saturday, the Giants “pulled out all the stops” to honor their now-former seven-time all-star and three-time World Series’ champion catcher in an hour-long pregame ceremony at Oracle Park.

There has even been some talk about Posey — who has been coaching his 11-year-old twins’ youth baseball and softball teams — one day managing the Giants. For now, however, that seems to be more of a fan fantasy rather than something that Posey has seriously considered. “I would never say never, but I’d think it would have to be a ways down the road,” Posey said. “It is so time-consuming. To do it the right way, like these guys are doing now, it seems like the hours are up every year.

“I guess that’s a long way of saying no.”

Buster Posey took to the field and the podium on Saturday to thank Giants fans. (Photo by Lachlan Cunningham/Getty Images)

Posey was also involved in the passing of the leadership torch, “ensuring he would have an imprint on the next generation of Giants baseball,” according to the Mercury News. “Manager Gabe Kapler’s first interaction with [Posey] came as part of a one-hour interview during his hiring process. Posey was the only player involved. “I think it’s as important as any conversation I’ve had as a Giant,” Kapler was quoted as saying.

Posey told KNBR that he’d “like to be involved with the Giants organization in some capacity,” and seemed to entertain the idea of making an appearance at spring training to mentor or work with up-and-coming players. “I mean, I think I would be able to do that,” said Posey. KNBR said that the Giants are known for hiring former players to front-office positions, or in advisory and part-time roles.

The Posey family are said to be headed back to Buster’s native Georgia (they just sold their East Bay home in March for $10 million). They have four children — the second set of twins were adopted as babies in 2020. Buster is “also very passionate about his foundation, BP28, that’s dedicated to fighting pediatric cancer,” KNBR said.

The “Buster Posey “lovefest” on Saturday at Oracle Park. (The Giants went on to beat the Cardinals 13-7. (Photo by Lachlan Cunningham/Getty Images)

At Saturday’s “lovefest” at Oracle Park, Posey said in a speech: “It was very important for me to be able to say thank you to the fanbase. [I’m] just grateful and humbled to have a day like this. I’ve loved the game my whole life, so just really grateful to have been honored in this way with teammates and coaches and fans and family and friends.”

Posey said in an interview that he will miss the friendships and bonds that came with being a player — and that he’ll miss the game, of course. “Honestly though, I feel like I got the most out of my body that I felt like I could. I was happy that I could have my last year be a positive one, really selfishly — for myself.”

Buster Posey ended his 12-year career — all spent with the Giants — with a .304 batting average, the highest ever by a catcher in their final season. Above: Posey grounds out in the fourth inning against the Dodgers in Game 4 of the NLDS. (Photo by Ronald Martinez/Getty Images)

In the last few years, Buster Posey seems to have carved out a reputation for putting family above baseball. He opted out of the shortened 2020 season over concerns for his newly adopted twin baby girls during the COVID pandemic. In choosing to retire at the end of 2021, Posey passed up a $22 million player option. “No matter how much money you’ve made, not many people walk away from $20 million,” Giants’ pitcher Alex Wood told the Mercury News.

“He’s as good of a person as you could ever be around in a clubhouse and in life,” Wood went on to say of Posey. “To see him day in and day out do what he did last year, just as a baseball fan, was friggin’ awesome. I feel really fortunate to have gotten to spend last year with him.”