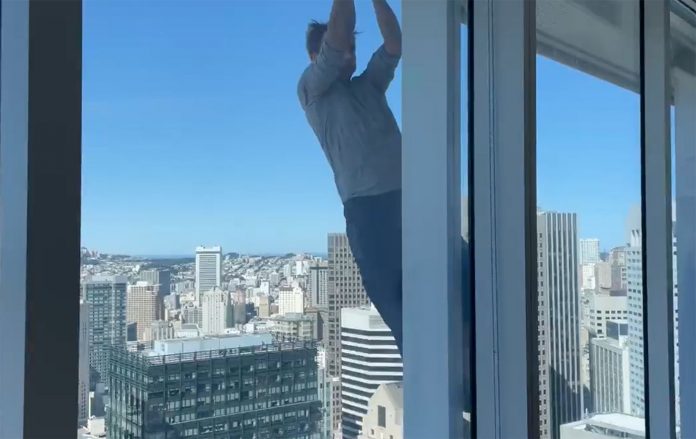 Some Dude Free-Climbed Up Salesforce Tower This Morning

A free-solo type climber decided to scale the outside of Salesforce Tower Tuesday morning, and pics quickly made it to social media from both inside and outside the building.

Despite the extremely dangerous nature of this stunt — especially on a kind of windy day! — reactions ranged from surprise to amusement. Except for the SF Fire Department, which tweeted, “AVOID THE AREA and join us in condemning this action.” The SFFD sad the unidentified man “is placing firefighters lives and the publics safety at risk.”

Salesforce Tower is 1,070 feet tall, and with no operable windows it would seem this man needs to get to the top just in order to get to safety, or else free-climb all the way back down.

San Francisco Fire is on scene with other Public Safety Agencies at 415 Mission, Sales Force Tower for a reported climber climbing the 60 floor tower. This person is placing firefighters lives and the publics safety at risk. AVOID THE AREA and join us in condemning this action. pic.twitter.com/QDpkfrYs4E

Walking to get coffee in San Francisco and this dude is just climbing a building pic.twitter.com/aTzeXLVBa8

Here’s a view of the climb from inside the tower, from an employee at one of the companies that leases space in the building.

Look at this dude climbing the salesforce tower in #SanFrancisco #Salesforce pic.twitter.com/cPMRF6sizR

We’ll update if and when this guy makes it to the top.

The SFPD is reportedly on the scene, along with medics, and it seems likely that an arrest may be made — if he makes it.