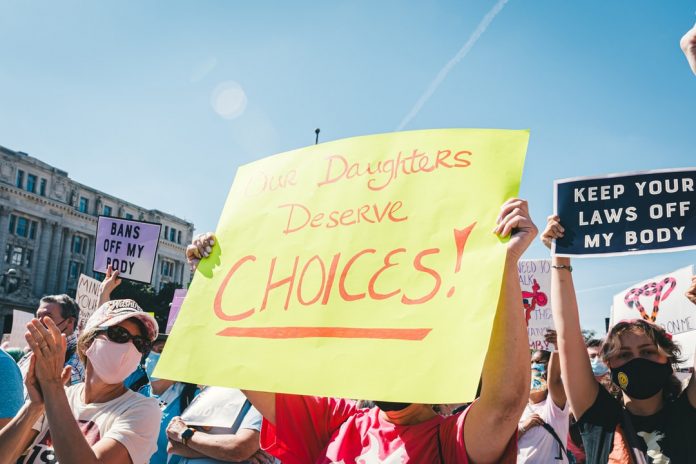 Multiple groups are organizing a rally for abortion rights today in San Francisco, as part of a nationwide response to the leaked, draft, possibly majority opinion coming out of the Supreme Court that would overturn Roe v. Wade.

As Bay City News reports, the rally is taking shape at 5 p.m. outside the Phillip Burton Federal Building at 450 Golden Gate Avenue. It’s being organized by the National Mobilization for Reproductive Justice’s San Francisco chapter, and will have multiple participating groups.

One of those groups, the Raging Grannies Action League, announced their participation on Facebook and Instagram Tuesday morning. A flyer for the rally includes one of their frequently held protest signs, which says, “Grannies Still Here Fighting to Protect Reproductive Rights Our Generation Won.”

It may be too much to hope for at this point that a Republican nominee with daughters, like Neil Gorsuch or Brett Kavanaugh, might have a change of heart because of a national uproar about reproductive rights. And Chief Justice John Roberts is already not happy about the media and political shitstorm from this leak — and he said Tuesday that it would be immediately investigated.

The court said in a statement that while the leaked draft was authentic, it “does not represent a decision by the Court or the final position of any member on the issues in the case.”

And Roberts added in a statement, “To the extent this betrayal of the confidences of the Court was intended to undermine the integrity of our operations, it will not succeed. The work of the Court will not be affected in any way.

“We at the Court are blessed to have a workforce — permanent employees and law clerks alike — intensely loyal to the institution and dedicated to the rule of law. Court employees have an exemplary and important tradition of respecting the confidentiality of the judicial process and upholding the trust of the Court. This was a singular and egregious breach of that trust that is an affront to the Court and the community of public servants who work here.”

But foes of abortion are already nervous that the big win they’ve all been hoping for for decades could be undermined by this leak.

Members of Congress are discussing taking some action to codify Roe in the law, although this would likely require killing the filibuster in the Senate. Republican Senators Lisa Murkowski and Susan Collins would at least be willing votes — and Murkowski tells the Times that if the final ruling goes the direction of Alito’s draft opinion, “it rocks my confidence in the court right now.”

The Republican party line at the moment seems to be trying to focus on the egregiousness of the leak itself and who the leaker is, rather than on the content of Alito’s — fairly radical and hardly measured — opinion. As the Times reports, Senate Minority Leader Mitch McConnell put out a statement suggesting that Chief Justice Roberts could perhaps pursue criminal charges, but there does not seem to be any legal basis for such charges.

Meanwhile, activists on both sides of the abortion debate are mobilizing two months earlier than they thought they would need to, as the court’s decision was not expected until late June or early July.

Some are already calling for the court to accelerate its timeline for releasing this ruling, given the turmoil the leak is bound to cause.

“That would almost certainly disrupt the justices’ opportunities to address each others’ arguments in successive drafts of majority, concurring and dissenting opinions,” writes Times SCOTUS reporter Adam Liptak. “And it would respond to one breach of the court’s norms with another. But in this volatile legal landscape, the possibility of an accelerated schedule cannot be discounted.”