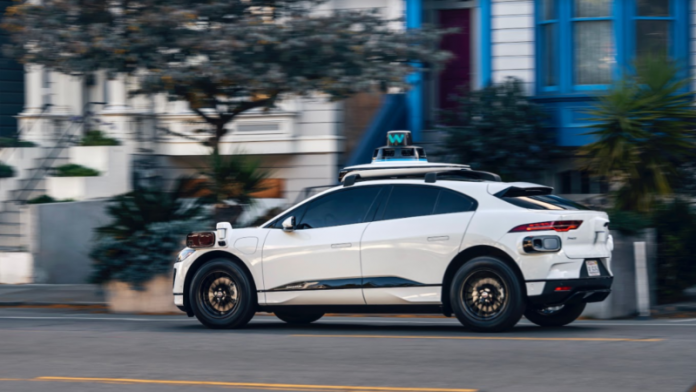 As of this week, self-driving taxis are more of a full-fledged reality in San Francisco than they ever have been before. And five years after Uber thumbed its nose at all regulation and rolled out its self-driving cars on SF streets without any permits at all, the CPUC has given the official green light to two more law-abiding companies to launch hail-able car service with robots at the wheel — albeit with “safety drivers” still sitting physically behind the wheel and ready to take control if need be.

Both companies had been granted earlier permits to operate with passengers on a testing basis, with no paid fares — and beta users of the Waymo One app have been getting free rides around SF for the last six months as a result. Cruise began its free robo-car service in early February.

Waymo now says it will roll out broader, app-based, paid taxi service in its all-electric Jaguar I-PACEs via the app in the “coming weeks” — and it currently has thousands of people on a waitlist after last August’s beta announcement. Waymo has already been offering paid taxi service in Phoenix, Arizona over the last three years, and since October 2020, those cars have been fully driverless, with no one in the driver’s seat.

Prashanthi Raman, Cruise’s vice president for global government affairs, says in a statement to Reuters that the new permits from the CPUC are “another positive incremental step forward. Our mission has always been to launch a driverless commercial ridehail service here in San Francisco, and that’s what we’ll continue working with our regulators to deliver.”

“Autonomous vehicles are a breakthrough technology that hold the potential to improve safety for all road users, and issuing these permits allowing for fare collection and shared rides is an important and measured step toward the commercialization and expansion of the service,” says CPUC commissioner Genevieve Shiroma in a statement. “As the technology is deployed, we will keep a close eye on the impacts of autonomous vehicles on safety, the environment, and on disadvantaged communities.”

The CPUC collects quarterly reports from the participants in its autonomous vehicle pilot program, and these reports now date back to November 2019.

Neither Waymo nor Cruise is yet permitted to operate its autonomous vehicles in fog or heavy rain, which is another indication of where the technology’s outer limits now lie. And Cruise is currently part of the CPUC’s pilot program for testing of fully driverless vehicles, with no safety driver present — but the company says it has not yet received a response from the agency on its request for a driverless deployment permit.

The companies have had to jump through various safety hoops to get self-driving vehicle deployment permits separately from the California Department of Motor Vehicles, which both now have.

Previously: If You Would Like to Hail a Robo-car in San Francisco You Can Do That Now With Waymo