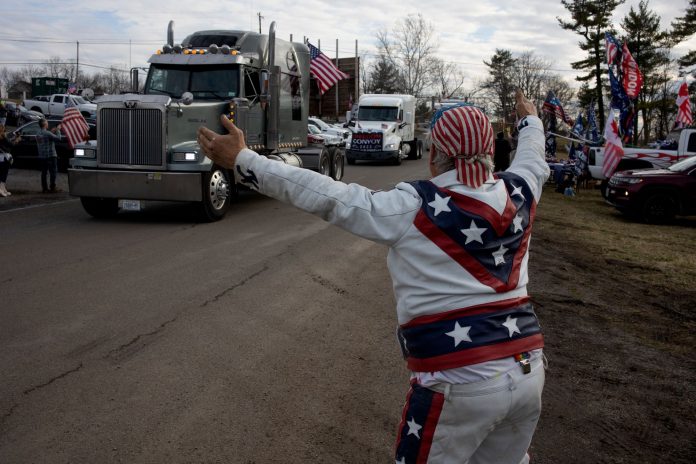 A weekend appearance in the Bay Area by the trucker “People’s Convoy” was greeted by a pelting of eggs in Rockridge, they unsuccessfully tried to find Pelosi’s house in SF, and ultimately dragged their tails back to Sacramento.

February’s anti-public health “Freedom Convoy” trucker protests in Canada were somewhat effective at gumming up supply chains, but also very effective at turning public opinion against the truckers. Yet their tantrums were catnip for the far right, so here in the U.S., so a group of American truckers billing themselves as the “People’s Convoy” have started a similar effort that was intended to protests COVID public health restrictions, except that hardly any of those are in effect anymore, so now they’re just protesting a hodgepodge of conspiracies that they believe to exist.

And this People’s Convoy trucker fleet rolled through the Bay Area this weekend! Let’s take a look and see how it went.

Members of ‘People’s Convoy’ drove across country from MD to the Bay Area in CA. They went to the home of Dem Assembly member Buffy Wicks where they honked horns and used bullhorns against her support of abortion rights. After leaving, they were pelted by eggs by young residents. pic.twitter.com/DroqPk2G7o

Breaker breaker, good buddies, you see them above getting pelted with eggs by adorable teens in the East Bay, shortly after the truckers attempted to protest at the home of state Assemblymember Buffy Wicks.

“Well, it’s convenient because there’s a Safeway right there that sells eggs,” one trucker can be heard complaining.

We will warn you there is profanity in the video above, but oh, will you giggle with delight and likely watch and watch again a video that will simply never get old.

My son (junior at Cal) was at a cafe when he saw a ton of Berkeley HS students run into that Safeway and come out with a shopping carts filled with eggs. Enjoy! pic.twitter.com/AnOgZtQcQ1

It would be a real shame if teens and college students all over the country started to do the same thing to these trucker convoys.

Daily Beast reporter Zachary Petrizzo has been monitoring the convoy’s CB conversations, and reported Thursday night (before the egging incidents) that “The People’s Convoy made it to San Francisco and decided to try and locate Nancy Pelosi’s residence, but the planned activity of placing flags in her yard fell apart due to the group failing to come to a consensus on what home was actually Pelosi’s.”

The People’s Convoy made it to San Francisco and decided to try and locate Nancy Pelosi’s residence, but the planned activity of placing flags in her yard fell apart due to the group failing to come to a consensus on what home was actually Pelosi’s.

What is it with wingnuts and getting Nancy Pelosi’s address wrong? We’re not sure, but reporting and CB chatter indicate the convoy has left the Bay Area, and are again parked at a privately owned racetrack in Sacramento.

Related: Is a Truck Driver Protest Coming to CA? [SFist]

Image: HAGERSTOWN, MARYLAND – MARCH 10: Truckers protesting COVID-19 mandates and demanding an end to the Emergency Powers Act return to their base camp after circling the D.C. Beltway, March 10, 2022 in Hagerstown, Maryland. Calling themselves the People’s Convoy, the loosely knit group of truckers and their supporters from around the country has committed themselves to law abiding and non violent protest. (Photo by Andrew Lichtenstein/Corbis via Getty Images)

Facebook
Twitter
Pinterest
WhatsApp
Previous articleCampos Won’t Run Against Haney Again in June, Even Though His Name Will Be On the Ballot
Next articleA Huge Number of SF’s Supportive Housing Units Are In Run-Down, Vermin-Infested SROs, and It’s Barely Better Than Being Homeless