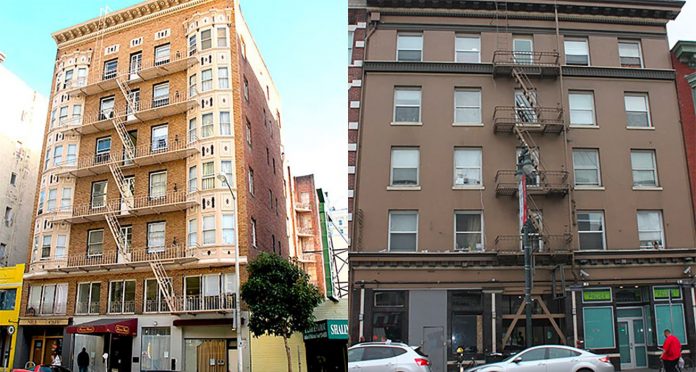 A Huge Number of SF’s Supportive Housing Units Are In Run-Down, Vermin-Infested SROs, and It’s Barely Better Than Being Homeless

San Franciscans have long known that the single-room occupancy hotels (SROs) that dot the Tenderloin and the area around Sixth Street in SoMa are chaotic, substandard places to live. But now the Chronicle has crunched some numbers and gone inside a handful of these buildings to show just how terrible the situation really is.

As big cities with big homeless populations go, San Francisco is uniquely rich in SRO units, in part because politics and the finances around addressing homelessness have helped preserve many of these buildings pretty much as they were decades — if not a century — ago. Today the SF Chronicle brings us a lengthy investigative feature, clearly months in the works, that takes a long look inside a group of these buildings, and talks with tenants who have been placed there through the city’s supportive housing infrastructure. And in many cases, the picture that’s painted is one of third-world squalor, surrounded by the tragedies and chaos that come with drug addiction, extreme poverty, and mental illness.

Essentially, the piece is exposing the fairly open secret that a large chunk of San Francisco’s supportive housing stock — funded by many millions of taxpayer dollars every year through the Department of Homelessness and Supportive Housing (HSH) and managed through a web of nonprofits — is dilapidated, full of cockroaches and rodents, and is barely a step up from being unhoused.

You can read it for yourself and see the brief portraits of some people who are either presently living in these conditions or who have recently moved out or been kicked out for one reason or another — one big takeaway is that many of the residents of these buildings have significant case-management needs that aren’t being met.

But below are some key points:

It isn’t a pretty picture, but it helps shed some light on where San Francisco is spending the hundreds of millions of dollars it spends on supportive housing every year. The HSH budget for 2020 was $600 million, as the Chronicle lays out, with a huge portion of that going to lease and maintain its supportive housing stock. And thanks to FEMA money during the pandemic, the HSH budget was $1.1 billion in 2021.