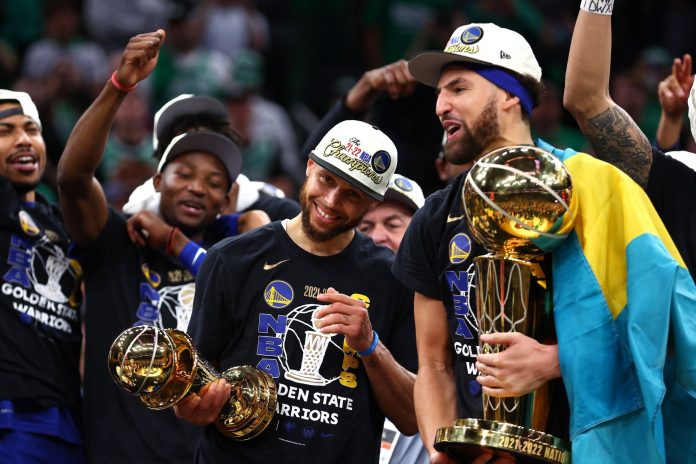 After a Five-Year Dynasty, Then Injured and In Last Place Before Climbing Back to the NBA Mountaintop, the Warriors are Champions Again

And just like that, it’s over. We’re done. We did it. We win. We are the Champions.

Now that it’s over, it feels like it ended abruptly, even though it’s mid-June and the season started in October. Even though it has been such a long, winding, perilous road to get here, and even though the Golden State Warriors defied the odds and won when no one said that they could, the mission is finally complete. There is no more climbing to be done — the Warriors are standing on the mountaintop, victorious, the trophy raised above their heads, the ski-googles donned, the champagne mist wafting through the high-altitude air.

I really can’t believe it’s over. No amount of hardware, no ceremony nor abundance of headlines can truly express what it’s felt like to get through the highs and lows of this season. The season itself was the reward — the championship is the cherry on top.

“These last two months of the playoffs, these last three years, the last 48 hours… every bit of it has been an emotional rollercoaster,” said Stephen Curry, now a four-time NBA champion and first-time Finals’ MVP, at the postgame press conference. “On and off the floor, you’re carrying that on a daily basis, trying to realize a dream and a goal, like we did tonight. You get goosebumps just thinking about all of those snapshots and episodes to get here. This championship hits different and has so many emotions, just because of what it took to get back here.”

Stephen Curry went to another level in these Finals, the culmination of years of heartbreak, hard work and determination to return to glory. (Photo by Elsa/Getty Images)

In the first quarter, it felt like it might be a disastrous game. The Boston Celtics came out swinging with expected desperation, jumping out to a quick 14-2 lead after a few Golden State turnovers. Jaylen Brown was instantly red hot, and looked as if he might have a 50-point game. (He had 34, tying Steph Curry for leading-scorer of the Game 6.) The Warriors had to call a timeout at 12-2 to try and stop Boston’s inertia.

The Warriors’ defense tightened up, stifling Boston, while the offense found some pace. Draymond Green hit a three pointer late in the first quarter — his very first of the Finals after going 0-for-whatever. On the next possession, Steph Curry made an impossible-looking three, followed in the next few minutes by all three of Jordan Poole’s three pointers.

It was the start of an 21-0 Warrior run that extended well into the second quarter, and it was clear that Golden State had come to the East Coast to clinch a title.

It’s a storyline in every game: “Steph Curry isn’t just a great shooter, he can also finish at the basket.” (Photo by Kyle Terada/USA TODAY Sports – Pool/Getty Images)

The game seemed most contested in a shot-for-shot-slugfest in the third quarter. Boston managed to put together a run, with Al Horford heating up, especially from three, scoring several of his 19-points on the night. The Warriors couldn’t miss, however, and answered nearly every Celtics’ bucket. The Dubs had a 22-point lead mid-way through the third, but Boston whittled it down to 9 points late in the quarter.

For a moment, it seemed like it could happen, like the Celtics were going to wrangle the momentum, that the Boston crowd would go off the Richter scale and will their team to victory and back to San Francisco for a winner-take-all Game 7.

It was 74-65 with about 30 seconds left in the third, and Draymond Green was just inside the three-point line, looking to dish it to someone. But — probably to everyone’s surprise — he rose up instead, shot, and hit what might have been the biggest basket of the evening.

It was like hitting a mute button on the crowd.

After struggling on offense in the Finals, Draymond Green hit a few big shots in Game 6, but none bigger than this two-pointer over Robert Williams to put the Warriors up by 11 points at the end of the third quarter — crushing the momentum the Celtics were trying desperately to ignite. Green had 12 points, 8 assists, 2 steals and 2 blocks last night, but those numbers do nothing to describe his impact on the game. “His fingerprints are on everything,” said the announcers. (Photo by Elsa/Getty Images)

Still, Boston wasn’t finished. With about five-and-a-half minutes left in the fourth quarter, Jaylen Brown hit a three to cut the lead to 8. Again, it felt as if the momentum could swing.

But the Celtics simply could not stop turning the ball over, or getting their pocket’s picked by the Warriors. Boston had 22 giveaways on the night to the Dubs’ 15. It was an Andrew Wiggins three and a Draymond Green drive to the basket that put the Dubs back up by 13, and even though the Celtics had answers, Golden State kept making shots. They led by 15 with a minute and a half left in the game.

There is not enough praise to be given to Andrew Wiggins, who had 18 points, 6 rebounds, 5 assists, 4 steals and 3 blocks last night. But again, the stat sheet does not tell the whole story about his influence on the game. (Photo by Kyle Terada/USA TODAY Sports – Pool/Getty Images)

Long before we had obviously won the game, I started thinking about who the series’ MVP would be, or rather, wondered if Stephen Curry had decisively, unequivocally claimed the title. Even if Andrew Wiggins had another monster performance and Steph had been quiet in Game 6, Curry seemed to have the MVP locked. (I immediately felt uncomfortable for jumping the gun, and guilty pitting Warrior against Warrior.)

Steph’s absence as a Finals’ MVP had been such a storyline, though, and his performances against Boston had been reliably spectacular. (Even his “off-night” saw him scoring in double-digits.) Of course, the ‘Chip’ is all that matters, but damn, what about that Steph-MVP-icing on the cake?

At the postgame press conference, a reporter asked Steph Curry: What does it mean to finally be a Finals’ MVP? “Forget that! We champs — why are you starting with that question?” Steph banged his hands on the table playfully.

“We got four championships!”

“Still Life(s) of an MVP.” (Photo by Elsa/Getty Images)

As the last seconds ticked off the clock, Steph Curry started to get emotional, and would later say that he kind of blacked out for a second. This is where my emotions set in, too — namely disbelief that the season was about to end. It was truly bittersweet, but overwhelmingly sweet. There will probably never be another season like this, where the Warriors play the role of scrappy underdogs who get no love.

Curry: “I clearly remember some experts and talking heads puttin’ up [Steph held up his fingers in a circle] the big zero of how many championships we would have movin’ forward because of everything we went through. You hear all of that, you carry it all, you try to maintain your purpose, not let it distract you, but you carry that weight.

The Boston Celtics seemed like a team — a very good team — that had, perhaps, started to unravel, to hit a wall, or to pass their peak, while the Warriors were peaking at exactly the right time. Don’t think of peaking as playing “perfectly,” as not missing shots, as not turning the ball over, or that Steph, Klay, Wiggins and Jordan Poole all had to have at least 25 points each, per night. Don’t think that peaking even means playing “pretty” games.

Peaking means winning when it really counts, and by whatever means were necessary.

The Warriors won games in all kinds of scrappy ways. It came together when it had to. It was improvised around injuries and absences. It withstood hot-and-cold streaks through the second half of the season. Where there was a Warrior will, there was a way to win.

We are the champions, my friends. (Photo by Adam Glanzman/Getty Images)

Last night, Klay Thompson said: “People called me crazy. I said championship or bust because I saw how we came out of the gates, I knew we had a chance to do something special, and here we are. It’s so incredible.”