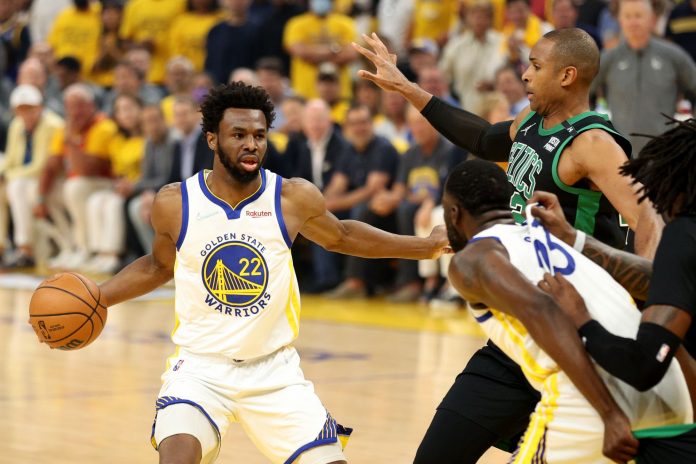 You knew that Draymond Green was due for a good game on Monday night, and from the opening tip, he was impactful on both ends of the floor. You knew that Klay Thompson was due to hit some big shots, and he did. And you knew that Andrew Wiggins was probably going to continue his awesome streak, just because he’s been in that gear — but you probably didn’t know just how off-the-charts he would be.

And, after his epic, 43-point night in Game 4, and after an NBA-record 233 straight games with at least one-made three pointer, you knew that Stephen Curry might cool off, just a little. And he did, but an “off” night for Steph still meant 16 points and 8 assists. (Curry had just two fewer points than Jaylen Brown, who was the Boston Celtics’ third-leading scorer on Monday.) Then there’s the difficult-to-quantify statistics of Curry drawing multiple defenders and giving his teammates room to work — to say nothing of the defense that Steph played last night.

You knew that the rest of the Golden State Warriors’ lineup was more ready to take the weight, and they did. You also knew that Boston’s phenomenal 7-0 record after losing a game — meaning they’ve never lost back-to-back games this playoff season — probably wouldn’t last. And it didn’t.

Because the series was tied 2-2, and because we all understand how basic math works, you knew that whoever won Game 5 would take control of the series, which the Golden State Warriors have. With a 104-94 win last night, the Dubs are one win away from the mountaintop heading back to Boston for Game 6 on Thursday.

Andrew Wiggins followed his clutch Game 4 performance with a 26-point, 13-rebound Game 5 at Chase Center last night. It’s the first time that this writer can remember when Wiggins was the Warriors’ leading scorer. (Photo by Jed Jacobsohn – Pool/Getty Images)

Not long ago, a reporter asked Steve Kerr why the Warriors were so good in third quarters, but so blah to start games. “If you can start a half like that, why can’t you start the game with the same intensity and discipline?” the reporter wondered.

“I ask myself that question very often, and I don’t have an answer,” Kerr said.

Defying convention, the Warriors jumped out to a quick double-digit lead in the first quarter last night. The Celtics couldn’t buy a bucket, starting something like 0-12 from three. In the words of the ABC announcers, Boston seemed to have a hangover from their Game 4 loss.

Early in the first quarter, Draymond Green nearly got a steal, but couldn’t control the ball, and went diving into the crowd. It set a tone and showed the intensity that Draymond came to play with. (Photos by Ezra Shaw/Getty Images)

“Felt a lot more like myself today,” said Draymond Green on his podcast last night. “Came out the gate really aggressive on the offensive end, which was great for me to see the ball go through the net, but also apply pressure to their defense.”

Draymond did foul out of the game last night, the third time he’s done so in these Finals.

I kept rewinding and rewatching Draymond’s impromptu first-quarter crowd-surf last night, and then his ensuing check-in to make sure everyone was alright. No other sport smashes through the fourth wall and lands in laps quite like basketball. (Photo by Jed Jacobsohn – Pool/Getty Images)

The game drifted into the doldrums in the second quarter, with neither team shooting well. The Celtics got some mid-range game going, and chipped away at the lead, though the Warriors managed to hang onto their double-digit advantage; it was 59-31 at the end of the first half.

What could possibly go wrong?

You knew that Boston wasn’t going to stay ice-cold forever, and they didn’t. Defying convention, Golden State did not have an explosive third quarter, and their 12-point lead was immediately erased to start the third. The Celtics made something like seven straight threes, eventually claiming a five-point lead. Boston would outscore the Warriors 35-24 in the third.

Jason Tatum led all scorers last night with 27 points, going 5-9 from three with 10 rebounds. Tatum has averaged about 25 points in the Finals, but has yet to have an epic, breakout game. Does anyone know if Tatum is due for one? (Photo by Lachlan Cunningham/Getty Images)

But Golden State absorbed the hit.

Klay Thompson made back-to-back threes late in the third, and the Dubs would take the lead again with about a minute left in the quarter. Jaylen Brown worked his magic in the paint, and got a bucket and one, to elevate the slug fest and help Boston regain the lead.

Cue Andrew Wiggins. On Boston’s next possession, Wiggs was all over Jason Tatum; he made a dangerous pass to Jaylen Brown, who had to shoot with the shot clock running down — he missed, and Wiggins grabbed the rebound and passed the ball to Jordan Poole with three seconds left.

We all know what happened next. Shot, buzzer, millions of people holding their breath, bank, splash.

The pendulum had swung from west to east, from green to gold, but had settled on the Warriors’ side. It was 75-74 Golden State after three.

Jordan Poole’s splashing ways would continue, the Dubs would score 10-straight points in the fourth quarter and quickly reclaim an 11-point lead. The Celtics got sucked into some referee drama after the Dubs had successfully sold a few Academy Award-worthy flops. Whatever momentum Boston had been clinging to seemed to fizzle — they only scored five points in the first eight-and-a-half minutes in the fourth.

Jordan Poole, shortly after his buzzer-beater, prepares to break the fourth wall and high-five some fans. Poole had 14 points, going 4-8 from the field and 3-6 from three. (Photo by Lachlan Cunningham/Getty Images)

Andrew Wiggins applied the icing to the cake, and hammered the last nails in the coffin, staying super-active and going inside to tally buckets. With just over two minutes left in the game, Wiggins drove from near the logo, taking it all the way to the cup for a huge, exclamation-point dunk.

It was a full team effort last night for the Golden State Warriors. Garry Payton II, on the far right, had 15 points in Game 5. Klay Thompson, left, had 21 points. (Photo by Ezra Shaw/Getty Images)

Do we all sort of know and feel in our bones that, after his so-so performance last night, Stephen Curry is maybe due for a big — or at least bigger — game?

“First playoff game ever not making a three? What does that say to me?” Draymond Green wondered aloud on his podcast. “Game 6, I feel like he’s just gotta be due for an explosion. I know the response that I’m expecting.”

At the postgame press conference, Steph was asked, What is your mentality after a game like this?

“Keep shootin’.” Curry answered. “I’m not afraid to go 0-for-whatever because I’m gonna keep shootin’. I don’t think I’ve ever been happier after an 0-for-whatever night just knowing the context of the other ways you try to impact the game.”