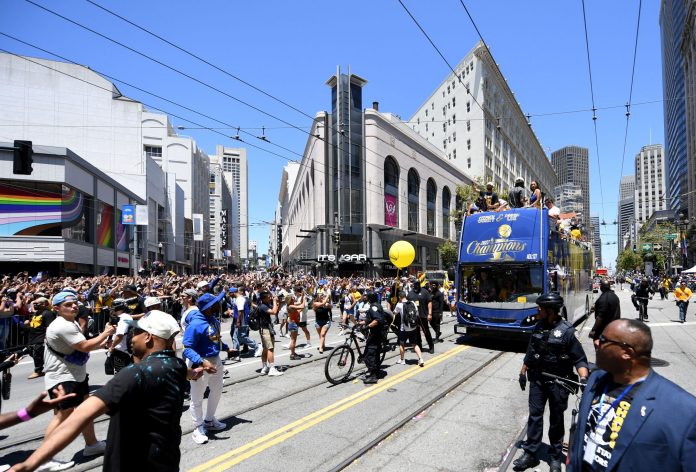 Awards, Trades, Taxes and Fines: An Offseason Check-In With the Golden State Warriors

The San Francisco Giants probably wish their regular season was going half as well as the Golden State Warriors’ offseason.

After winning their fourth ‘chip’ in June, the Warriors have taken to the stage, the internet, podcasts, and the bleachers, always with the golden glow and gaping grins that emanate from those who sit upon the throne. After a few trades — one of them a crushing heartbreaker — the Warriors will have a slightly different look from their 2021/22 lineup, but the core and culture remain intact.

Here’s a quick catchup with the offseason Dubs, and a glimpse into how champions summer:

On Sunday, Klay Thompson was seen in the stands at Dodger Stadium, pounding beers, poking fun at Joc Pederson’s “Tiger King” mullet, and cheering on his brother Trayce Thompson, who hit a clutch double to help The Boys in Blue to a 7-4 win, and a 4-0 series sweep over the Giants. Would Bay Area fans have tolerated such ‘treason’ from anyone less than a beloved champ?

It’s not clear if Klay was still in SoCal — where he grew up — after shooting a feel-good “My Wish” segment for ESPN. Thompson hung out with 15-year-old cancer surviver Joseph Tagaban, from Alaska, at a hip-looking gym in Orange County.

Thompson was almost certainly still in town after last week’s ESPY awards, where he won Best Comeback Athlete.  “I would not be here without the Warriors organization — I mean, who pays a guy after tearing his ACL? Like, that’s unheard of.”

The ESPYs were, of course, hosted by one Stephen Curry, who roasted a few guests (including his kids), as well as one Grant Williams of the Boston Celtics. I’d never watched the ESPYs before, but this year’s iteration featured the perfunctory award-show opening musical number, a cheesy, self-aware, self-deprecating and relentlessly roasting ballad. “What greater honor could there be, then giving trophies out to athletes who already won trophies?” comedian Jay Pharoah sang to Steph.

Winning teams are often victims of their own success. As Sporting News writes, “The impending doom of free agency hung as a dark cloud over championship celebrations [in] the streets of the Bay Area.” We all knew that the stock of nearly every Warrior was going to rise in unison with the celebratory hoisting of the Larry O’Brien Championship Trophy, but we all harbor hope that this team can stay together for the foreseeable future.

A recent headline in Fansided nearly stopped my heart: “Jordan Poole Extension Could Mean Wiggins Traded . . . If Poole wants more money than the Dubs can offer, things get dicey. [They] can sign Poole for a massive contract, but only at the cost of not being able to offer Wiggins big money next summer.”

Are Jordan Poole and Andrew Wiggins financially pitted against each other? (Photo by Thearon W. Henderson/Getty Images)

Remember how many times we praised Kevon Looney this season, especially during the playoffs? The Warriors and Looney agreed on a three-year, $25.5 million deal, keeping the Warriors’ core intact.

The most heartbreaking loss was one Gary Payton II — a.k.a. Young Glove, aka one of your favorite player’s of the year — to the Portland Trailblazers. If there was an award for Best Player to Come Out of Nowhere and Wildly Exceed All Expectations, then surely GP2 would’ve been the hands-down winner. (That category should just be called the ‘Garry Payton II Award.’)

In early June, Payton told ESPN that he’d applied for a job in the Warriors’ video department. “They told me my chances of making the team [were] quite low. They had a video coordinator job open, and I was trying to get it. You never know when a 10-day [contract] might pop out in between that video coordinator room.”

We hardly knew thee, Gary Payton II. I look forward to games against Portland next season, just to get a glimpse of that GP2 energy. (Photo by Thearon W. Henderson/Getty Images)

During primetime games, national announcers heaped praise on Gary Payton, often calling him one of the best defensive players in the league. GP2 also scored big points in the playoffs, and staged his own mini-comeback (should we call it a ‘Klay Thompson?’) after going out in round 2 against the Memphis Grizzlies, but returning for the Finals.

It was GP2’s energy, though, his bouncy and soaring dunks, his X-Factor on-tap, and the fun he had in between whistles. He would do pushups after a fight for the ball. In Minnesota last season, Payton was going for a loose ball on the sidelines when he stepped on a fan’s all-white Jordans; GP2 immediately wiped off the scuff marks. I love moments like those, which Payton also had on tap.

GP2 actually did win a non-ESPY accolade this year — he was presented with the NBA’s Community Assist Award shortly before the Finals began, and was granted a $75,000 donation to his foundation, a non-profit raising awareness about dyslexia.

It’s been pleasing to see how the Warriors have supported the players who’ve moved on, and it’s sparked a conversation about the business of being a professional athlete. On his podcast, Draymond Green compared pro-athletes to the white-collar workforce. Would we judge someone who switched jobs every few years, going from Apple to Google to Tesla, for example? Speaking specifically about Kevin Durant’s desire to be traded from the Brooklyn Nets, Green asked, “Why does that make you weak? Why does that mean he’s ‘running from something?'”

(There were rumors that the Warriors were considering reacquiring Durant and getting the old band back together, but that seems unlikely; the latest chatter is that the Boston Celtics are taking a hard look at KD.)

Warriors’ owner Joe Lacob got into a bit of hot, high-priced water for his comments about the NBA’s luxury tax. (Photo by Thearon W. Henderson/Getty Images)

As fans and mere economic mortals, it might be easy to bemoan a player who turns down millions of dollars to seek out many millions more. “Isn’t winning and being a champion enough?” we might think. And don’t the Warriors have bottomless pockets? The Dubs are the second most valuable team in the NBA — worth $5.6 billion — according to a list complied by compiled by Forbes. But don’t forget the tax-man’s cut.

With a league-high payroll of $184 million, the Warriors exceeded the NBA’s $136.6 million salary cap, after which a “luxury tax” is levied. Last year, the tax bill came to about $170 million. In mid-July, Warriors’ owner Joe Lacob was fined after calling the tax “unfair” on Point Forward, Andre Iguodala and Evan Turner’s podcast.

“I think you should be paying a high luxury tax if you’re using it to get free agents and outspend your competition. But if you’re developing your own guys, why am I paying $200 million in luxury tax?” Lacob noted that even though the Warriors are only about $40 million over the payroll cap (not a small number, but not massive, either, Lacob said), they’ve accrued a luxury tax that’s almost equal the entire payroll.

Will this financial situation be sustainable for Warriors?

New Warrior Donte DiVincenzo said hello to Warriors’ head coach Steve Kerr during a NBA Summer League game in mid-July. The buzz around DiVincenzo was that he was a “bargain.” (Photo by Ethan Miller/Getty Images)

It would be easy to lament the loss of the old. I’m excited to see who will be the next breakout player and fan favorite. Who will prove to be a “bargain player,” and who will quietly fade into obscurity?

The Warriors signed Donte DiVincenzo — a former Milwaukee Buck and Sacramento King — to a two-year, $9.2 million deal, JaMychal Green for a to-be-determined contract, and Lester Quiñones from the Memphis Grizzlies to a two-way contract.  In this year’s draft, Golden State selected Patrick Baldwin Jr. in the first round, followed by Gui Santos and Ryan Rollins.

Is there another Gary Payton II out there eager to get their chance?

Somebody get down to the video room.