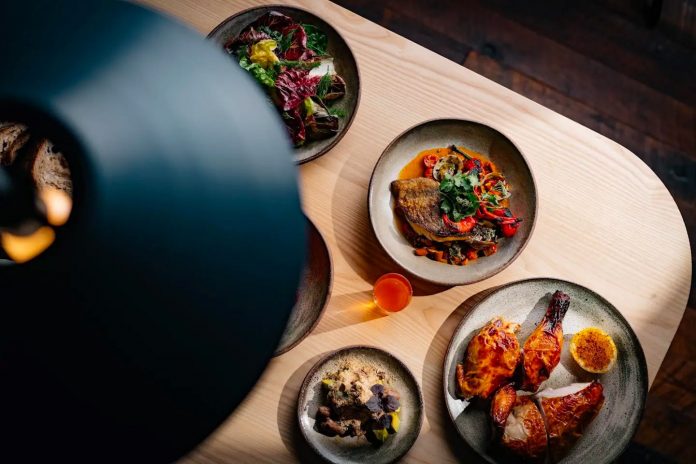 Much lauded bar-restaurant Bar Agricole is reopening this week, after some pandemic-related delays, in the base of the tower at 1550 Mission Street — 30 months after we first heard news about the move. And the place has recruited a talented chef in Nick Balla, who’s been largely away from the SF scene for several years.

Yes, the James Beard Award-winning Bar Agricole is finally returning as of Wednesday, August 3, but with a twist — the cocktail-focused spot isn’t going to have the traditional front bar setup that it used to have, at least for now. There isn’t even a bar at all in the opening format — just a center island in what’s being called the “tasting room,” where a staff of four is responsible for making drinks, taking orders, and running food to the 34-seat dining room.

As Eater reports, this island is tricked out with an insulated ice box that will house the blocks and shafts of ice to chill mixology master Thad Vogler’s pared-down, classic-inspired cocktails — and maybe we shouldn’t be speaking of these as Vogler’s drinks, per se, anymore. While the Ti’ Punch is back on the menu — taken from the simple Caribbean recipe of sugar syrup, rhum agricole, and a squeeze of lime — the drink menu was refined by committee, with bartender Craig Lane and the other staff members all having to unanimously agree on each drink’s inclusion.

Vogler, like other restaurateurs have in recent months, has re-conceived Bar Agricole as a sociocracy — as the website now explains, this model “creates scaffolding and roles that support our values of transparency, effectiveness, and equity that gives every team member a voice in shaping the business.” He’s pursuing B Corp status, and will ultimately be sharing the restaurant-bar’s profit and loss statements publicly.

Some of this change stems from the situation Vogler says he found himself in in 2020, as the pandemic hit and as his bar businesses were already under major financial strain. As he wrote in Punch magazine last year, “I thought I could change how the bar business worked and the way people drank—more thoughtfully, more intentionally. In hopes of converting the masses, I sold spirits at a painfully thin margin that could not accommodate the debt of opening a business, which gave way to the classic mistake of growing too soon in an attempt to create an economy of scale.”

Vogler opened Trou Normand in the last decade, his second cocktail-centric restaurant further downtown, focused on brandy and charcuterie, and that was followed by a West Indian rum bar called Obispo, which had already closed for retooling with the pandemic hit. Vogler and a partner also opened the swanky Nommo on Rincon Hill in early 2019. All three of those businesses shut down permanently in mid-2020, and as Vogler writes, by the end, “Everyone was mad at me: employees, landlords, partners, vendors, investors, architects, the general contractor, the insurance broker, the IRS.”

In last 2020, Vogler and his businesses were hit with wage-theft lawsuits and lawsuits from unpaid vendors — and some of the wage-theft claims dated back to 2015, as the Chronicle earlier reported.

By last year, Vogler had vowed that if and when Bar Agricole returned, it would be a more equitable workplace.

To that end, while this is now just a single location, Bar Agricole is no longer just a cocktail bar and restaurant. As he’d earlier talked about before the pandemic even rolled in, Vogler is launching a single-origin spirits brand, and the new space at 1540 Mission Street will house the retail space and fulfillment center for the spirits company as well — with an eight-seat bar in that space that will eventually serve as overflow space for the restaurant at night, but will not be in use when the restaurant opens for reservations only this week.

Vogler plans to launch the company with a list of nine Bar Agricole-branded spirits this fall, though it’s unclear how the retail aspect will work — or if there will be a daytime tasting room setup along the lines of St. George Spirits in Alameda. (Vogler hinted last year that one spirit he’ll be selling is a seasonal gin collaboration with St. George.)

The kitchen at the new Bar Agricole is being run by Balla, who previously won accolades at Bar Tartine — which closed in late 2016 — and chef Will Napoli, who had worked at Bar Agricole’s old incarnation on 11th Street.

The new menu includes some very Bar Tartine-sounding dishes like eggplant with sesame ricotta and paprika; and halibut with green strawberries and preserved lemon. There is also a broccoli raab flatbread with farmer’s cheese and cashew salsa verde, and a dish of grilled chicken with green olive-shishito pepper salsa.

The sleek, minimalist, wood-paneled space was designed by Seth Boor, and appears to be a very Zen oasis off of busy Mission Street.

Facebook
Twitter
Pinterest
WhatsApp
Previous articleGiants Wheel and Deal on Trade Deadline, But Their Division Rivals Make One of the Biggest Moves In MLB History
Next articleDay Around the Bay: Paul Pelosi Pleads Not Guilty to DUI Charges