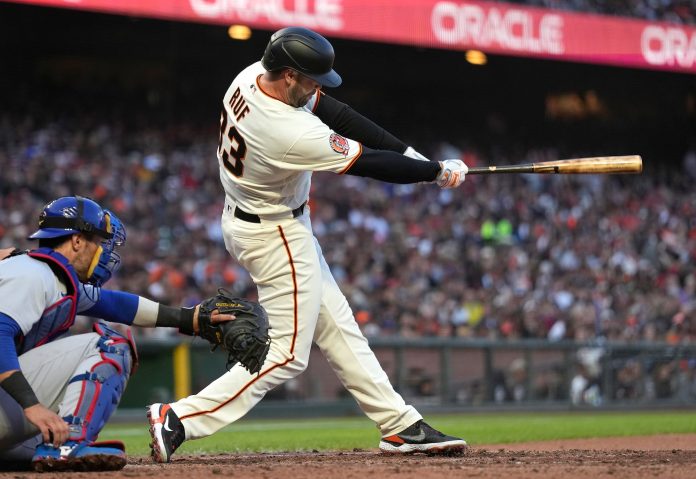 Giants Wheel and Deal on Trade Deadline, But Their Division Rivals Make One of the Biggest Moves In MLB History

After weeks of wild speculation and agonizing among fans, superstar Juan Soto is headed to a California city named after a saint. No, it’s not San Francisco, though the Giants will see plenty of the Dominican outfielder this season.

On Tuesday (a few hours ago), the Giants traded Darin Ruf to the New York Mets for third baseman and left fielder J.D. Davis, as well as three pitching prospects, according to Chico Enterprise-Record; the E-R added that catcher Curt Casali and left-hander Matthew Boyd, who are both currently on the injured list, are headed to the Seattle Mariners in exchange for 26-year-old reliever Michael Stryffeler, though that trade has not yet been officially announced.

Ruf has been described as a slugger having a down year, which also kind of describes Davis, his replacement from New York. “Primarily a designated hitter this season, [Davis] does not solve the Giants’ athleticism issues,” the Enterprise-Record said. Because of injuries, the Giants had to play Ruf, who was having some success against left-handed pitchers, against righties more than they would have preferred. “So cutting ties with Ruf always made some amount of sense, even if we have to say goodbye to a very lovable Giant.”

Two of the Mets Single-A pitchers are headed to the Bay Area as part of the Ruf deal: Nick Zwack and Carson Seymour. “Zwack, 24, was the Mets’ 17th-round pick in last year’s draft and has a 2.36 ERA in 15 starts this season. Seymour, 23, their sixth-round pick last year, has similar marks: a 2.76 ERA in 13 starts for the same rotation,” the Enterprise-Record said.

Curt Casali also appears to now be a former Giant, according to sources. (Photo by Norm Hall/Getty Images)

For the Giants, today’s trade deadline might be most significant for moves made by their rivals: Juan Soto is now a San Diego Padre. “Has there ever been a midseason trade quite this monumental?” asked ESPN. “Are the Padres the NL’s new team to beat?”

“This is one of the biggest trades in baseball history, right up there with Alex Rodriguez going from the Rangers to the Yankees,” said ESPN writer Joon Lee. “Combine the fact that Soto is one of the greatest players in the game with the fact that he’s 23, and he’s relatively unprecedented in the history of baseball in terms of offensive production.”

Juan Soto’s prayers seemed to have finally been answered by the Padres. (Photo by Mitchell Layton/Getty Images)

The Padres already were the team to beat if the Giants had any hope of a postseason appearance in the fall. After a decent start to the season, the Giants have been eating the Padres dust for most of the summer. And after halting a pre-All-Star-Game-break skid and even finding a little momentum, the Giants lost seven games in a row after the break, and have lost 9 of their last 12 games. They are 18.5 games behind the first-place Dodgers, and 6.5 behind a Padre team who now has the best hitter in the league.

If you were hoping for a trade-deadline miracle, then you’re now counting on J.D. Davis proving to be the biggest bargain in MLB history.