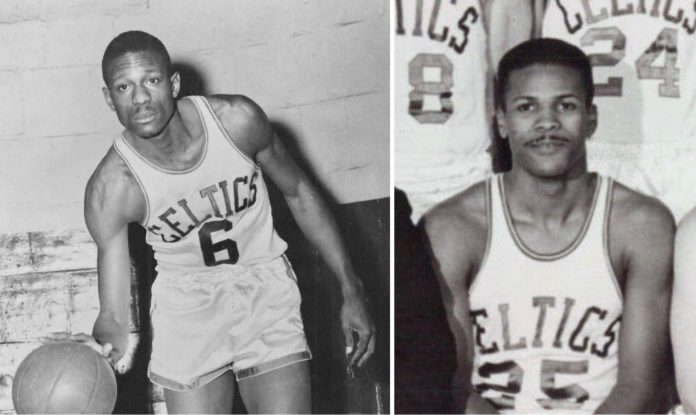 The late basketball legend turned coach Bill Russell, who passed away Sunday at age 88, was part of a famous duo in San Francisco basketball lore of the last century, alongside his former USF Dons teammate K.C. Jones (1932-2020). So today, a little basketball history from the early days of the NBA.

There is no official documentation of the birth of the alley-oop, but surely, some of the first-ever lob-to-catch-to-basket points were scored between Bill Russell and K.C. Jones in the 1950s, on the hardwood at the University of San Francisco. This isn’t to say that the two future NBA superstars had some kind of patent on the move. One website said that the alley-oop, a word taken from the French expression allez-oop — the cry from circus acrobats about to leap into action — was “invented” in 1891, around the birth of organized basketball.

But several websites credit the USF Dons’ Russell and Jones for putting the alley-oop into full-time service. It’s not clear if the duo were dunking off the alley-oop lob (they probably weren’t; Wilt Chamberlain is often credited to have pioneered that iteration), so we are left to imagine, in grainy black and white, exactly what those exchanges might have looked like. But the fact that Bill Russell and K.C. Jones are widely credited with creating a fundamental basketball play speaks volumes about their forthcoming legacies. The duo would go on to superstardom with the Boston Celtics as both players and coaches, setting records for most career championships, and becoming groundbreakers and all-around legends of the game.

Bill Russell’s recent passing at age 88 highlights the evolution of the game of basketball, and the countless contributions made by two Bay Area-bred greats.

The University of San Francisco men’s basketball team, circa the mid-1950s. That’s K.C. Jones, second from left on the top row, with Bill Russell third from left in the middle row. (Photo: Via the Boston Globe)

Even the most diehard San Francisco sport’s fans could be forgiven for forgetting (or just being flatly ignorant of) the University of San Francisco Dons, who may still be considered one of the greatest college basketball teams of all time. In the early 1990s, my father took an administrative job at USF, and insisted that we go to a basketball game, saying something about how the ‘Dons’ — short for Don Francisco de Haro, the first mayor of San Francisco — were once great, with legendary players who went on to become iconic Celtics. (My dad was a huge Boston fan.) But in the early ’90s, the Dons were no Duke or North Carolina; they were, in fact, quite bad at the time, and the former glory and pedigree of the team was lost on me.

“In its infancy, college basketball was low, slow and disjointed,” wrote the Mercury News in 2020. “Then came the University of San Francisco Dons. College basketball may have gotten off to a slow start, but it was always going to be the game we know now. You could argue USF was the transformative outfit that gave it a huge shove toward its manifest destiny.”

The Mercury News writes that almost no one played above the rim as frequently as the Dons. “Give them credit, they warned a sea change was in the offing.”

After graduating from high school in West Oakland, Bill Russell was said to be looking for work at Bay Area shipyards, when a Dons player spotted and recruited him. K.C. Jones’s family had moved from Texas to San Francisco when he was nine; he learned to play basketball on a patch of gravel, according to popular legend.

It was Russell’s second year on the Dons’ squad, during the 1954-55 season and the alleged mainstreaming of the alley-oop, when the Dons’ ascendancy began. In that season’s championship game, USF beat defending NCAA champion La Salle; Russell scored 23 points, “but it was Jones who led the Dons with 24 points and held La Salle’s 24-point-per game forward to six field goals,” the Mercury News reports. After the win, Russell said, “I played on the greatest team in the world, and we defeated the best team we ever played against.”

In a game where Russell scored 26 points and nabbed 27 rebounds for the Dons, the announcer called him “the Babe Ruth of basketball.” The Dons would go on to 60 consecutive wins between 1955-57.

Double trouble from a dynamic duo: Left, Bill Russell as a USF Don. Right, K.C. Jones takes it to the rim as a Boston Celtic. (Both Photos: Wikipedia)

In 1956, Jones and Russell represented the US at the Olympic Games in Australia, where they won gold. (The US men’s team beat their opponents by an average of 53 points per game.) K.C. Jones tried out for the NFL, but ended up a Boston Celtic.

“Jones wasn’t much of a scorer, and he was often overshadowed by flashier teammates,” the New York Times wrote in December 2020, after Jones passed away. (He was also 88.) “But he was renowned for his defensive play — the work that doesn’t necessarily show up in box scores — in frustrating many an opposing backcourt star.” Jones and Russell would win eight consecutive championships as Celtics; they also won two championships each as head coach of Boston. They are two of only eight players in basketball history to win an NCAA championship, an NBA championship, and an Olympic gold medal.

It has been a nostalgia-filled year for the NBA, which celebrated its 75th anniversary in 2021-22, and saw two of the league’s original teams facing off in the Finals. With the passing of Bill Russell, one can’t help but reflect on how the game, and America, have evolved. (And how much the latter continues to spin its wheels in the mud.)

I wish my early-’90s self was as attracted to nostalgia as I am now, and could have absorbed the context of that USF Dons’ game 30-ish years ago. I am left to imagine the two young stars, who would go on to dominate the game and pave the way for future phenoms and coaches, dishing passes to each other. I can see Jones lobbing the ball to the nearly seven foot Russell, who grabbed the rock while in mid- air, scored the two-pointer, and showed the fans something they’d never seen before, but something future generations would come to know as a staple of the game.

Facebook
Twitter
Pinterest
WhatsApp
Previous articleBay Area Sports Legend and Civil Rights Icon Bill Russell Has Passed Away
Next articleGiants Wheel and Deal on Trade Deadline, But Their Division Rivals Make One of the Biggest Moves In MLB History