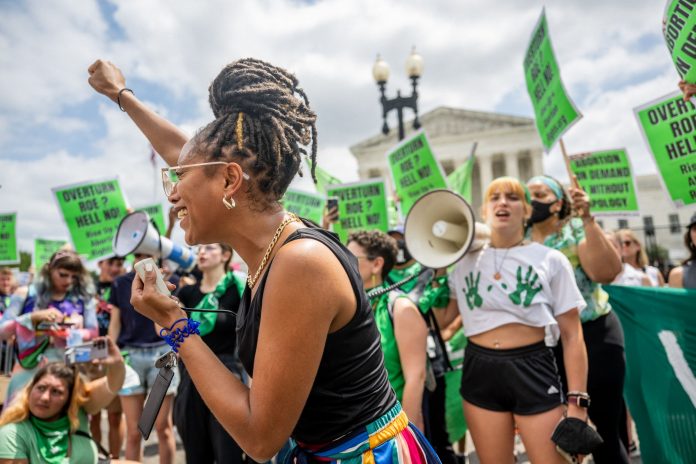 Bay Area Revs Up to Rally for Abortion Rights, Here’s Where Friday‘s Protests Are Planned

Pride Weekend just became protest weekend after the Supreme Court overturned Roe v. Wade, and we’ve collected all of Friday’s planned Bay Area actions and protests scheduled to go down as their announcements come in.

After Roe v. Wade was officially overturned early Friday morning, you quickly got a sense that the Trump-packed Supreme Court isn’t going to stop there; they will go after same-sex marriage, they will go after contraception, they will go after any interracial marriage that is not Clarence and Ginni Thomas. As seen below, they’re already out protesting in Washington, D.C., and the protests start here in the Bay Area late Friday afternoon. (SFist already observed helicopters in the SF skies shortly after 2 p.m.)

The scene at the Supreme Court this afternoon pic.twitter.com/DvUQbCc51s

We’re listing Friday’s San Francisco and Oakland reproductive rights rallies by date and time below. Many have links, and some ask you to register, which we don’t recommend doing if you don’t know the organizations. SFGate and the Oaklandside have provided protest roundups in San Francisco and the East Bay, and there are a few more in other Bay Area communities we’ve thrown in too.

This Ferry Building rally looks to be a pre-rally that’s planning to march and join the others. Per their Facebook event description:” We will walk from the Embarcadero to City Hall at 4:15pm to join Planned Parenthood California and Women’s March SF at 5pm.”

We have to protect abortion access – in California and everywhere. Join PPNorCal at SF City Hall today at 5pm to help fight back: https://t.co/Hxyt3dBv9u #BansOffOurBodies #SCOTUS #ProtectRoe @PPActionCA pic.twitter.com/mpf3cRy7or

The official Planned Parenthood of Northern California rally is at 5 p.m. Friday afternoon at City Hall, there is not a speaker list announced yet.

Supreme Court Overturns Roe v. Wade!
Protesters will spill into the streets today as the much anticipated Supreme Court decision in Dobbs v. Jackson has been announced.https://t.co/Hbp2y783qx

Not sure whether this rally at the Phillip Burton Federal Building at 450 Golden Gate Avenue is organized by IndyBay or just being promoted by them, but their IndyBay writeup notes that “A march, with civil disobedience, will follow.”

abortion rights protest in san francisco TODAY!! please go if you are able to and stay safe!!! pic.twitter.com/zu0d0ENwHz

We don’t see an official organizer listed for this Powell and Market Street rally, and it’s unclear whether it’s a march or meetup.

The big Oakland rally Decision Day Action in Oakland is at Frank Ogawa Plaza, which if you’re not familiar, is outside Oakland City Hall and two blocks up from the 12th Street BART station.

via Planned Parenthood of Northern California

There are also Friday rallies planned in Napa and San Leandro (4 p.m.) and in El Cerrito and San Rafael (5 p.m.)

Additionally, KQED has an excellent roundup covering COVID safety and knowing your legal rights when attending protests during this particular era.

Facebook
Twitter
Pinterest
WhatsApp
Previous articleTrump Himself Has Told Friends That Anti-Abortion Laws Are ‘So Stupid’ and That a Reversal of ‘Roe’ Would Hurt Republicans
Next articleCyrus, the Once Michelin Two-Star Dining Destination, Returns In a New Sonoma Location After 10-Year Hiatus