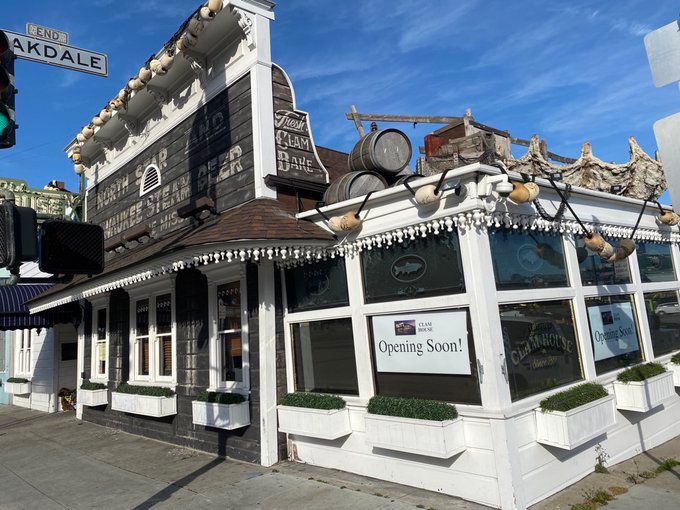 The charmingly outdated Old Clam House has been closed throughout the pandemic, and the building went on sale. But some familiar local restaurateurs have bought it and will reopen the place, keeping it the same, but expanding the menu.

When we reported last May that Bayview’s vintage, historic Old Clam House was up for sale, it was unclear, and perhaps improbable, that a new buyer would keep that special kitschy magic about the place, let alone even keep it the Old Clam House. We all hoped the delightfully antiquated fish-themed silverware, buffalo plaid plastic tablecloths, and walls full of ridiculous historical ephemera would remain in place, but that would be up to the buyer, and not to us.

Stay Clam and Carry On: new owners for the Old Clam House pic.twitter.com/LEpw1w3I6Y

News! Local Twitter personality Burrito Justice tweeted the above image Tuesday, with a sign on the restaurant (which has been shuttered the whole pandemic), saying “Clam House Opening Soon!” And the Chronicle confirmed that the Old Clam House has been purchased and will remain the Old Clam House, under new owners the Florese family, who also own the Mona Lisa restaurant in North Beach.

“I went to see it, and wow,” new owner Filomena Florese told the Chronicle. “I was so impressed with it: the memorabilia, the history, that I said, ‘we have to reopen this.’ It’s the oldest restaurant, it’s in the same place. It makes you feel like you’re back in time.”

Florese says they are not going to change much about the Old Clam House. She says the memorabilia and decor will remain the same, Apparently the only notable changes will be to the menu, on which they plan to add cherrystone and razor clams to their traditional menu that only served Manila clams. They will also add some new Italian dishes.

“Since we’re an Italian family, we might add some pasta dishes,” Florese told the Chron. “Our tradition. But I want it to have the same feel people are used to, the same feeling I had when I walked in.”

The Old Clam House will apparently be reopening in early May. And it will then remain San Francisco’s oldest restaurant operating continuously from the same location. Yes, the Tadich Grill is technically the oldest restaurant in San Francisco, but it originally opened as a coffee shop on Clay Street in 1849, then changed its menu to steak and seafood in the late 1880s, and moved to its current California Street location in 1967. The Old Clam House opened on that same Bayshore Boulevard location in 1861 as The Oakdale Bar & Clam House, and with the same “Milwaukee Steam Beer” advertisement that remains painted on the facade today.

And hopefully, the “Milwaukee Steam Beer” signage stays too.