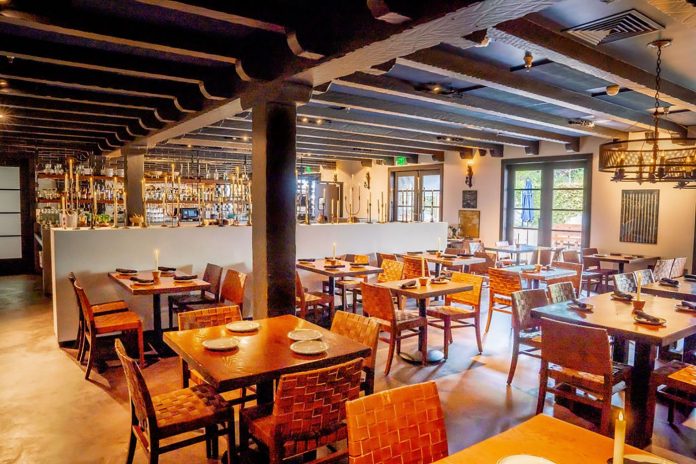 Colibri Mexican Bistro, the high-end Mexican restaurant on Geary near Union Square that opened around 2004 and closed in 2020, has found new life in the former Arguello space at the Presidio Officers’ Club.

The owners of Colibri, Eduardo Rallo and his partners, didn’t intend to permanently give up their prime location downtown, across the street from theaters and steps from Union Square. But after closing and starting a remodel in 2020, they found out that the city was buying the Hotel Diva — the whole building in which the restaurant lived — to transform it into permanent supportive housing for the homeless.

Their search for a new location led to a deal with the Presidio Trust to take over the space formerly occupied by Traci Des Jardins’ Arguello, in the historic Officers’ Club, and a new space at the Presidio Tunnel Tops, set to open this summer. SFist earlier reported on Rallo’s restaurant group’s deal at the Presidio, but it wasn’t clear then that Colibri was definitely the concept they would be bringing here. Rallo has also opened La Urbana on Divisadero, and Zazil Cocina Mexicana and El Jardin at San Jose’s Santana Row, all of which were distinct from Colibri.

Rallo says that more than half the original staff at Colibri in Union Square, including Executive Chef Edgar Castro, are returning to work at the new location, which has indoor and outdoor seating, and special historic ambiance in a building that is one of the oldest structures in San Francisco.

“We seek to deliver nothing but the most authentic flavors with a traditional component that is completely separate from nouveau cuisine,” Rallo says in a release. “Everything will feel like grandma just made it for you.”

As Rallo told Eater this week, Colibri’s menu was always influenced by Mexico during the Porfiriato, the period period of the late 19th and early 20th Century when General Porfirio Díaz ruled the country, and when, Rallo says, there was a “tremendous amount of French influence in Mexican culture.” And the historic bones of the Arguello space (parts of the adobe building date to 1776) will only add to the experience.

The vast majority of the menu will be familiar to fans of Colibri’s first incarnation, but there will be some new additions as well. These include quesabirria tacos — made with braised short rib and melted Monterey Jack — and a vegetarian tlayuda, sometimes called “Oaxacan pizza,” with black beans, cabbage, cactus, mushroom, tomato, queso fresco, and avocado.

Coming back will be Colibri’s well loved duck mole, the mole poblano, as well as the Chihuahuan lamb-shank stew known as chamorro de corderro. There will also be a new tortilla-making station beside the patio, where guests can see handmade tortillas being made daily.

On Saturdays and Sunday, brunch will be served starting at 10:30 a.m.

And, there’s a trendy smoke-box cocktail, served with the dramatic box at the table, but we don’t yet have the name for that one yet.

The new Colibri Mexican Bistro opens Sunday, May 1, and will be open weekdays from 11:30 a.m. to 9 p.m. after that, and Saturdays and Sundays from 10:30 a.m. on. A reservations site is not yet live, but you can sign up here to be notified.