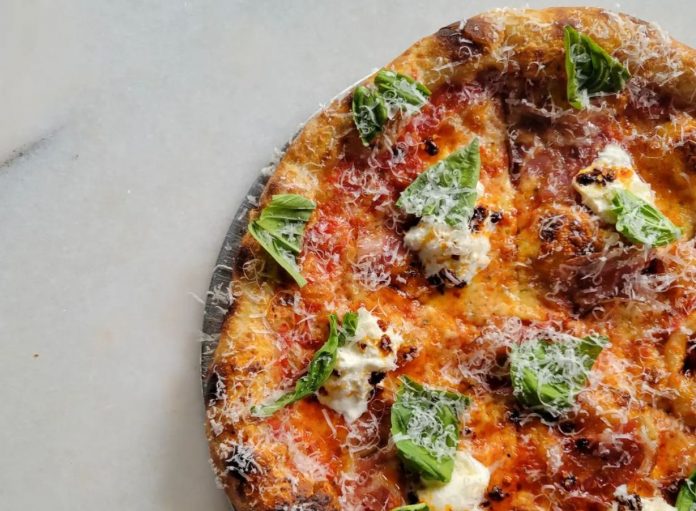 A former sous chef at Mister Jiu’s who famously came back from the dead after a sudden and random heart attack in the kitchen while prepping for New Year’s Eve in 2017 is turning his successful pandemic pizza pop-up into a full-fledged business.

Chef Eric Ehler, who also worked at Serpentine, Fort Point, and a decade ago launched a Korean pop-up called Seoul Food before working in the Michelin-starred kitchen of Mister Jiu’s, launched his pizza pop-up Outta Sight in early 2021. The operation started out serving pies a few nights a week out of the Pizzahacker space, but soon moved to Fig & Thistle, the popular Hayes Valley wine bar, where it has been a perfect fit as more San Franciscans came back out to socialize.

Outta Sight is still slinging yummy pies at Fig & Thistle, Tuesday to Saturday from 5 to 9 p.m. But in the coming months, Ehler will move once again and start serving pizza by the slice out of a storefront in Civic Center, at the edge of the Tenderloin, at 422 Larkin Street. (The space formerly occupied by Slingshot Cafe.) As the Chronicle reports, Ehler is aiming for an August opening.

Much like his compatriots at another pandemic pop-up-gone-brick-and-mortar, Sunset Squares, Ehler isn’t afraid to play around with the pizza form and non-traditional toppings — see the grilled chicken pizza above, the Rodeo, with “sticky” barbecue sauce, white barbecue sauce, pickled jalapeño, red onion, cilantro, scallions, and crispy shallots. But his spin on a margherita, the Marge, is about as true-to-form as they come — with dough, sauce, cheese, basil, olive oil, salt. “The final product is perfect,” Ehler said on Instagram.

He’s also got a Midwest/Chinese mashup of a square pie called the Mom, with cumin-spiced lamb ragu with creamy ranch, and an ode to Olive Garden breadsticks and scampi butter called the Orchard pie, with mixed mushrooms, garlic butter, scallions, basil, and rosemary honey — which Soleil Ho named one of the best dishes of 2021.

At the brick-and-mortar shop, slices will be the name of the game, though you can still get whole pies.

“Slice culture is beautiful,” Ehler said, speaking to the Chronicle last year. “You can grab a quick slice and walk/skate away with it and crush it in seconds… It is the ultimate street food.”

We can expect that Ehler will continue to get creative too, offering up specials and limited-edition pies as he has been doing, experimenting with the pizza form and pushing it to new and delicious places.

He tells the Chronicle he’ll be doing a vegan pie inspired by the nearby Heart of the City Farmers’ Market — but because vegan cheese is gross, this will be a cheese-less pie.