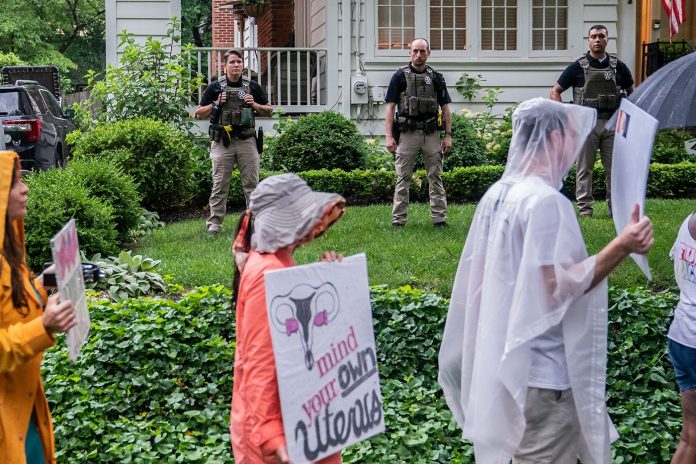 The Southern California man who was charged last week with attempting to murder or kidnap Supreme Court Justice Brett Kavanaugh at his Maryland home, was convinced to call 911 after texting his sister about his intentions.

26-year-old Nicholas John Roske of Simi Valley, California was charged in the case last week, and since then some details have emerged suggesting that Roske has had an extensive history with mental health issues.

Roske is accused of flying to the DC area and arriving in the neighborhood of Justice Kavanaugh in Chevy Chase, Maryland just after 1 a.m. on June 8. The federal criminal complaint against Roske indicates that he was spotted by US Marshalls posted near Kavanaugh’s home, wearing all black, getting out of a cab at 1:05 a.m., and not long after Roske called 911 to report on his intention to harm Kavanaugh and then take his own life.

As we learned later that day, Roske was arrested around 1:50 a.m.

As CNN reports, the thing that prompted Roske to abort his own mission and call 911 was a text to his sister.

Marcus Jones, the chief of police in Montgomery County, Maryland, said in a statement Tuesday that after spotting the marshals, Roske “turned around to contemplate his next move,” and “This is when he texted his sister and told her of his intentions and she convinced him to call 911, which he did.”

From there, via the criminal complaint, we know that Roske told a 911 operator that he was having suicidal thoughts, and that he had just landed after traveling from California with the specific intention of killing Kavanaugh after breaking into his home.

According to the audio of the 14-minute 911 call, obtained by CNN, the dispatcher said, “And you said you came from California. Do you know someone down here?”

“OK, and what were you coming to do?” the operator asked. “Just to hurt yourself and him? Or what was going to happen?”

Roske also explained that the reason he planned to kill himself was that “I didn’t think I could get away with [the murder],” and he told the operator he’d been “hospitalized a lot of times.”

Investigators say that Roske had formed his plot to kill Kavanaugh because he “began thinking about how to give his life a purpose,” and he believed that Kavanaugh was going to be responsible for both helping overturn Roe v. Wade and siding with conservatives on Second Amendment rulings that would loosen gun-control laws in the wake of the Uvalde school shooting, which took place two weeks earlier.

Protesters march past Supreme Court Justice Brett Kavanaugh’s home on June 8, 2022 in Chevy Chase, Maryland. An armed man was arrested near Kavanaugh’s home Wednesday morning as the court prepares to announce decisions for about 30 cases. (Photo by Nathan Howard/Getty Images)

Roske said he found Kavanaugh’s address using pictures on the internet — and abortion-rights protesters have been regularly demonstrating outside Kavanaugh’s home in recent weeks.

Roske came armed with a tactical knife, a Glock 17 pistol, two magazines, ammunition, pepper spray, zip ties, a hammer, a screwdriver, a nail punch, a crowbar, a pistol light and duct tape, according to investigators.

Roske is due in court for a preliminary hearing on June 22. He is formally charged with “attempts to kidnap or murder, or threaten to assault, kidnap, or murder a United States Judge.”