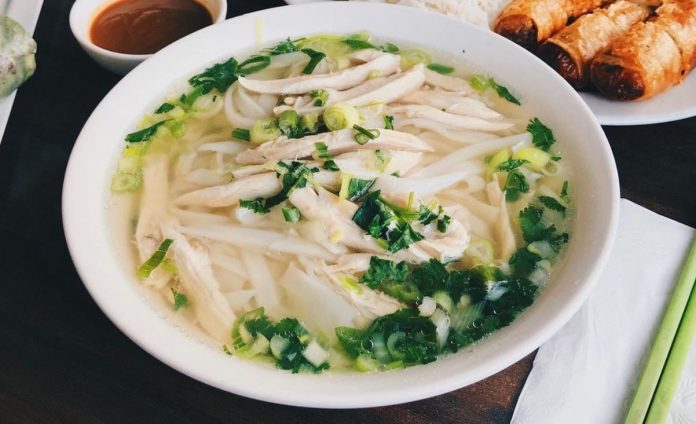 Charles Phan and the Slanted Door team are opening a new Vietnamese noodle soup spot in Larkspur, in the former Belcampo Meat Co. digs at the Marin County Mart complex.

This is the second expansion of the Slanted Door restaurant family in just the last two months, following the Mission District opening of Chuck’s Takeaway — Phan’s sandwich shop serving his spins on banh mi and Japanese-style egg salad sandwiches, which is currently only open three hours a day, weekdays only, for lunch.

Phan says that the menu at Moonset Noodle Shop will likely feature bowls like bún bò Huế, a spicy and umami-rich beef noodle soup; and bún riêu, a vermicelli noodle soup with a tomato- and shrimp-based broth. But he wants to be clear that this won’t be a customizable noodle-bowl type of place — joking to the Chronicle, “God would strike me.”

There will be chicken, pork, and vegetarian options, though, and it sounds like the menu is still in the works. And, curiously, he does not mention pho — but surely there will be pho?

Phan says that he’s always had a passion for the simple pleasures of street food, and he tells the Chronicle, “Street food has always been in my mind: it’s one of the great treasures of Vietnam.” Thus it makes sense that after opening a banh mi shop, he’s going to get in on the noodle game as well, offering more casual fare than he’s been able to at The Slanted Door over the last two decades.

Phan also has another casual, takeout concept called Rice and Bones, which serves rice bowls and other Vietnamese fare à la Out the Door. The only location of Rice and Bones so far is on the UC Berkeley campus.

Speaking of Slanted Door, the Ferry Building restaurant is expected to finally reopen this fall after an extensive renovation that Phan says he had been intending to do even before the pandemic — though it’s unclear why construction didn’t get underway, say, in 2020. The Out the Door takeout counter attached to Slanted Door is expected to reopen in the fall along with the restaurant.

Also in the works is a new Slanted Door location in Napa. But we now know that Phan’s other Embarcadero business, Hard Water, is not reopening, and the landlord is actually suing Phan’s restaurant group for back rent.

Facebook
Twitter
Pinterest
WhatsApp
Previous articleQuestions Abound at Healdsburg Bar Where Nine People in Six-Month Span Reported Their Drinks Were Drugged
Next articleUpdate: SF is Indeed Getting Another Shake Shack at Stonestown