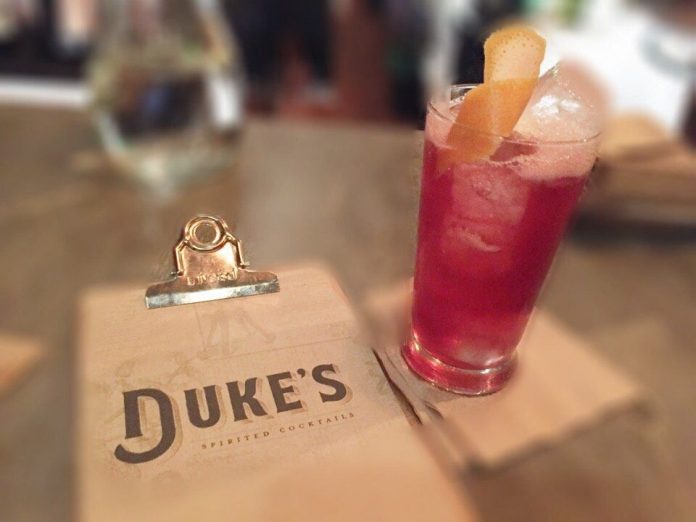 While there were no associated assaults reported, at least nine people have said their drinks were spiked with drugs in the last six months at the same popular bar in downtown Healdsburg.

A scary scandal has gone from bad to worse over the course of this month in the Sonoma County wine country destination town of Healdsburg.  At the beginning of April, one woman posted to Facebook that her cocktail had been spiked with drugs, according to the Chronicle, and several commenters on that post said they knew people who had the same experience at that same bar on the town square, Duke’s Spirited Cocktails. But following the publication of that April 6 article, today’s Chronicle reports that at least nine people have filed police reports since October, all also saying that they’d been unwittingly drugged at Duke’s Spirited Cocktails.

After one unnamed woman posted her experience to Facebook the first weekend in April, Healdsburg Vice Mayor Ariel Kelley posted to Facebook on April 4 that “It was brought to my attention that there is a Facebook post from an alleged victim who was drugged at a local bar in Healdsburg this weekend. According to the Healdsburg chief of police, this alleged crime was unfortunately not reported to local authorities.” (The crime has since been reported to Healdsburg PD.)

But that brought to light that the same crime has been reported several times, and each also at Duke’s Spirited Cocktails. According to today’s Chronicle, “At least nine police reports have been filed since October related to incidents there, yet police have no suspects or concrete evidence to prove that recurring druggings are in fact happening.”

“Several of these were filed after the woman’s April Facebook post,” the Chronicle reports. “At least one report came from a male.”

Healdsburg Police Department sergeant John Haviland told the Chronicle, “That’s the one thing we’re really wondering: why something like this is happening, what’s the motive, who is causing it and why.” He added that “Obviously there is something that’s happening, either at Duke’s or somewhere else in town, but the main common denominator seems to be Duke’s.”

The bar is obviously in crisis control mode, and has security video from April 2, the night the original Facebook poster was allegedly drugged. “I’ve had third parties not affiliated with the bar watch the tape, and if we had seen anything that was of concern, we would have acted immediately,” the bar’s owner David “Duke” Ducommun told the Chronicle. “This is a serious issue, but we don’t believe it’s a serious issue at Duke’s.”

And while the original poster did not go on record with the Chronicle, other victims did. This includes two women who don’t even know one another, but both report having been drugged at the bar on the night of November 13, 2021. One said she’s had two drinks with dinner at another establishment, then one cocktail at Duke’s, at which point he said “the whole world started sailing.” She vomited outside the bar, a friend gave her a ride home, and she passed out immediately with little recollection when she woke the next morning.

“I hadn’t budged. I was still wearing my heels,” she told the Chron. “Eight hours gone. Complete black.”

For now, the bar has switched to an all-female bartending staff, has added more security guards, and put QR codes in the washrooms for anyone in a situation where they feel they need help. But this may be something that requires some sort of investigative breakthrough or conclusion before people feel safe again.

Healdsburg is small, though affluent, and counts the three-Michelin star SingleThread in addition to the many wineries and vineyards on the outskirts of town. It’s about ten miles up the Redwood Highway from Windsor, a town whose mayor resigned last May amidst nine sexual assault allegations, many of which also involved date-rape druggings. These could be isolated and unrelated incidents, or it could be that some of the most exclusive parts of wine country have had a secret problem lurking beneath the surface that is only now coming to light.