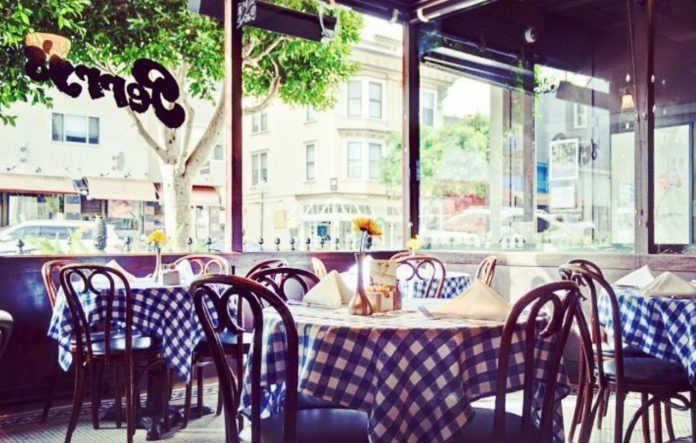 Perry’s, the 52-year-old Union Street institution that went on to expand its Bay Area footprint, is expanding once more with a new location in Novato.

In many ways, while Perry’s has endured as a perennial favorite, it is a relic of a bygone era. It has long been a popular place for burgers, steaks, and Cobb salads that was maybe always more about the atmosphere, the busy bar, the Marina/Cow Hollow singles scene, and the nostalgia for saloons that served stiff drinks and simple food.

Per the restaurant’s About page, “When Perry Butler initially opened Perry’s in 1969, he brought Union Street the hustle and bustle of the neighborhood saloons of New York’s Upper East Side. The blue and white checked tablecloths, hexagonal tiled floor, wood-paneled memorabilia clad walls, and menu of American classics produced an atmosphere that was comfortable, inviting and cool.” Butler was, at the time of the opening, still in his 20s, having relocated to SF after graduating from Dartmouth and working a few years in advertising in New York.

And given the timing of its heyday, it’s no wonder that Perry’s figured into Armistead Maupin’s Tales of the City, and it was a favorite of another Chronicle columnist who gave it frequent ink, Herb Caen. As the Nob Hill Gazette recalled on the restaurant’s 50th anniversary, part of its draw in the 70s was the presence of two famed Irish bartenders behind the stick, Michael McCourt (brother of Angela’s Ashes scribe Frank McCourt), and Seamus Coyle.

A second Perry’s debuted on the Embarcadero in 2008, giving the downtown business-lunch crowd another American food option. And Perry’s on Magnolia came along in 2015 in the historic Lark Creek Inn space in Larkspur. (In a 2009 review of Perry’s on Embarcadero, Michael Bauer credited Butler with inventing the fern bar, which the original Perry’s certainly was, but TGI Friday’s and Henry Africa’s might have beat Butler to the trend.)

Now, Perry’s is on its way to a 5,200-square-foot location at 225 Alameda del Prado in Novato, with an opening set for early May. As the SF Business Times reports, the new spot — the former Wildfox restaurant space — comes with a spacious outdoor patio, and it will be run by Perry Butler’s two daughters and son, Margie, Hannah, and Aldy.

“We’re excited as all-get-out about it,” said Butler, speaking to the Business Times. “We’re looking forward to rolling out the red carpet for the people of Novato.”

Butler also explained that this deal, to take over the space that Wildfox had occupied for two decades before the pandemic shuttered it, came along just as another one fell through. A huge new Perry’s location was slated to go into a new development in downtown Santa Rosa, but that is no longer happening.

Facebook
Twitter
Pinterest
WhatsApp
Previous articleWarriors Grind Out an Anxious Game 5 Win to Close Out Nuggets, Advance to Second Round
Next articleQuestions Abound at Healdsburg Bar Where Nine People in Six-Month Span Reported Their Drinks Were Drugged