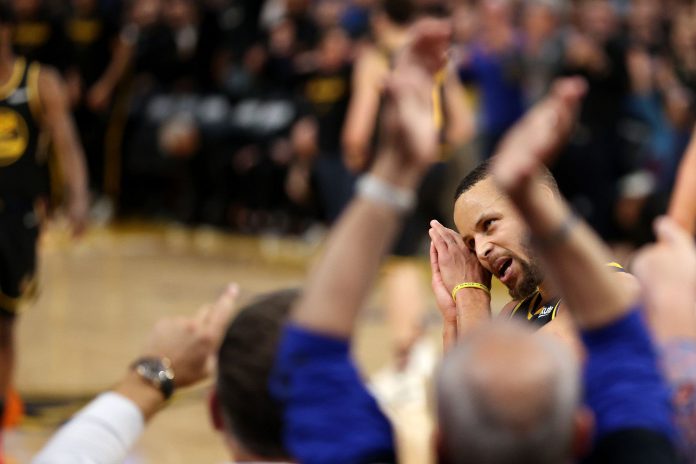 Warriors Grind Out an Anxious Game 5 Win to Close Out Nuggets, Advance to Second Round

The stakes felt unusually high last night for a team leading 3-1 going into a Game 5, no? After losing Game 4 in Denver on Sunday, the Golden State Warriors had three chances to close out the Nuggets, but among players and an anxious 18,000-plus crowd at Chase Center on Wednesday, there seemed to be a kind of do-or-die mentality.

“We have to come in with the mind-set like we have something to prove and it’s a must win,” said Klay Thompson after Sunday’s loss to the Nuggets. “Because a win by them, and anything’s possible. We’re coming out guns blazing on Wednesday.”

The Warriors battled to a 102-98 victory, eliminating the Nuggets and advancing to the Western Conference semi-finals against either the Memphis Grizzlies or the Minnesota Timberwolves. Even though the Warriors were comfortably ahead in the series, it was gutsy, character re-affirming win.

The Nuggets came out with their gold-plated guns blazing, as well, and both teams paced each other through a grindy, low-shooting-percentage, low-scoring first half — the slim Warrior lead was locked between 2 and 5 points for most of the first and second quarters, with the Nuggets eking out a small lead late. The game was tied at 48 at the half.

Plagued by fouls in Game 4, the Warriors continued to send the Nuggets to the free-throw line the first half last night. Aaron Gordon drove to the rim at will, and seemed to earn a whistle for every trip he took, though he shot just above 60% from the line. The Nuggets also owned the boards, out-rebounding the Warriors 50-37 on the night, with the lion’s share coming in the first three quarters. The Nuggets’ Nikola Jokić had yet another stellar game, scoring 30 points and grabbing a phenomenal 19 rebounds.

Nikola Jokić and Aaron Gordon do their best impression of meerkats as they watch a Steph Curry three-pointer hurtle toward the basket last night in the second half. (Steph made the shot.)(Photo by Ezra Shaw/Getty Images)

Through the first round of the playoffs, the Warriors have led the league in nearly every offensive category, averaging 118 points per game, and shooting more that 51% from the field and 42% from three. Last night, however, was not one of those high-octane-offense nights. After hitting his first few shots, Klay Thompson went 5-13 from the field, and 1-6 from three for 15 points on the night. Jordan Poole scored 8 points, his lowest total of the series, shooting 3-10 from the field.

At the end of the second half, it became clear that if the Warriors were going to get the W, it would have to be accomplished by other means — though obviously, scorers were still welcome.

Klay Thompson had his lowest scoring game of the series against the Nuggets last night with 15 points, but got it done in other ways — he had three assists, four steals and a block, and became a rebounding machine late in the game. (Photo by Ezra Shaw/Getty Images)

Did the Warriors have any other big-time producers who might have been able to put some points on the board? Who was missing from the conversation?

“In any playoff game, there’s gonna be grind-out quarters to finish it out where nothing on offense is pretty,” said Stephen Curry at last-nights’ post-game press conference. “It’s just who can show their physicality, their IQ, and get it done.”

The Nuggets got it done to open and close the third quarter, at one point building a 10-point lead. Steph got hot and hit a flurry of threes as part of a Warriors’ 11-2 run to make it a one point game, and Nikola Jokić got into foul trouble early in the second half. But the so-called “non-Jokić minutes” didn’t matter, because his replacement, DeMarcus Cousins, was lethal off the bench. Cousins had 19 points, shooting 8-12 from the field and 2-3 from distance — including a buzzer beater at the end of the third quarter to mark a 10-3 Nuggets’ run for a 78-70 lead.

After fouling out in Game 4, Draymond Green defended with discipline. He scored 11 points, and had six assists, a steal and three blocks. (Photo by Ezra Shaw/Getty Images)

“We got stops and we stopped fouling,” said Draymond Green of the Warriors’ fourth-quarter performance. The Warriors also started rebounding. Klay Thompson grabbed nine boards in last night’s game, more than doubling his per-game productivity. The Warriors got some scoring done, too: With the shot clock running down with just under seven minutes to go in the fourth, a wide-open Gary Payton II fired a three from the left wing.

The Warriors took a two-point lead, and GP2 would have his most productive game of the series, scoring 15 points, shooting 6-8 from the field and 3-4 from distance — with the biggest three-pointer yet to come.

It was that defense, though, that was the story of the fourth. The Warriors held the Nuggets to just six points for almost seven-and-a-half minutes, and hovered on top by 2-4 points.  ‘Joker’ was going to be ‘Joker’, though; he had a quick flurry, and the game was tied 90-90 with about two minutes left.

It was 94-92, Warriors, with just under a minute and a half remaining, when what might be considered the play of the game went down. Steph passed to Klay in the corner, which drew an extra Nuggets’ defender, leaving Draymond with an open drive to the basket and a seemingly wide-open layup — but Draymond passed it! With the shot-clock at about seven seconds, the ball flew around the perimeter, eventually finding Gary Payton outside the arc. He struggled with the pass and had to pick it up off the floor, and for a moment — two seconds on the shot clock — it looked like it might be a catastrophic possession, but GP2 lined it up, fired . . .

Gary Payton II fired and made a consequential three-point shot late in the fourth quarter last night, with the shot clock ticking toward zero. (Photo by Ezra Shaw/Getty images)

It was 97-92, Warriors, with a minute remaining. Jokić continued to have his way in the paint, scoring a quick two and cutting the lead to three. With about 45 seconds to go, the Warriors took their time setting up the possession, as Steph dribbled around the perimeter, then drove, dishing a left-handed layup with 1.9 seconds on the shot clock…

He scored, and at 99-94, the Warriors had essentially sealed the game.

With a layup with under a minute to go in Game 5 to put the Warriors up by five, Steph Curry put the Nuggets to sleep in round one of the playoffs. (Photos by Ezra Shaw/Getty Images)

“It’s a good reminder, again, of how hard it is to win a playoff game, of how hard it is to close the team out, and just dealing — you know — with the nerves of it all, ’cause it matters so much,” Curry said at the post-game press conference. Curry had 30 points with five rebounds, five assists, and two steals. He shot 10-22 from the field, and 5 of 11 from three. “It was fun, it was electric, it was loud. In the fourth quarter, you could tell there was kind of a collective anxiousness in [the building].”

Curry added, “Tonight was just a weird feeling because we hadn’t been there in a while. I think we wanted it so much, we kind of got in our own way a little bit. But we still remember how to do it, which is a good feeling.”

It was nothing but respect after the Warriors eliminated the Nuggets last night. “I just told [Nikola Jokić] thank you making me better,” said Draymond Green last night. “It’s an honor and pleasure to play against someone so talented and so skilled. He’s an absolutely incredible player.” (Photo by Ezra Shaw/Getty Images)

The Grizzlies and Timberwolves will play Game 6 tomorrow in Minnesota. Memphis leads the series 3-2; the winner will play the Warriors.