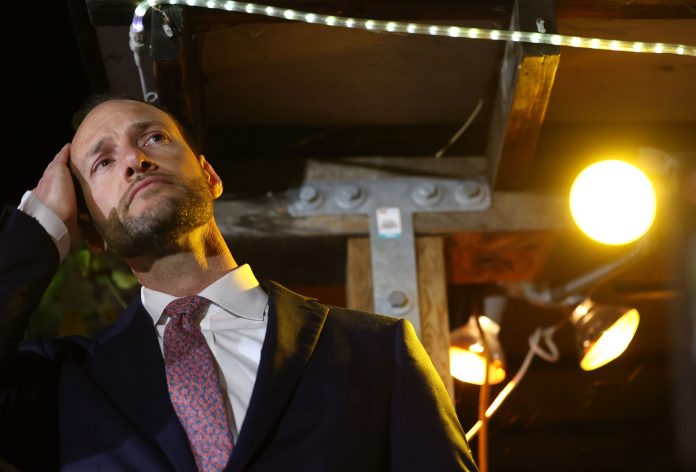 Probably wisely, recalled San Francisco District Attorney Chesa Boudin is going to sit out this year from campaigning and attempting to regain the DA’s office, citing the need to spend more time with his family.

“My son is on the verge of taking his first step and speaking his first word. My wife’s research on Multiple Sclerosis at UCSF deserves the same support she has offered my work. My elderly father just came home from prison after more than 40 years,” Boudin writes in a Twitter thread today. “My mother died in May and I have not had time to clean out her apartment or plan her memorial or even mourn her death.”

Saying he was putting his “family first,” Boudin confirmed that he would not run for office again in the November election that will decide who gets to complete the final year of his first elected term. Acknowledging that this news would disappoint his loyal supporters, he added, “I assure you I remain deeply committed to justice and to the people of San Francisco.”

It’s been a few weeks of “will he or won’t he?” speculation about Chesa Boudin’s plans for the two upcoming elections in which he could, potentially, return to the job he was recalled from. Depending on which factions of SF voters show up to the polls, there’s no telling whether Boudin could garner enough votes to overcome his detractors, and it would be unwise to speculate about his immediate or longterm chances.

In the June election in which Boudin was recalled, the initial large margin ultimately shrank after all mail-in and provisional ballots were counted. With a turnout of 46% of registered voters, the final results found 55% voting to recall Boudin and 45% voting against his recall.

Still, those ten percentage points might be hard to make up just a few months after a special election that received national attention, and a lengthy ad campaign that galvanized, in particular, SF’s large Asian American community against him.

But public sentiment could quickly shift under new District Attorney Brooke Jenkins, and she most certainly faces a complicated task in trying to appease tough-on-crime voters while sticking to her ostensibly progressive roots. And there is no doubt that a significant faction of San Francisco voters do not support policies that broadly punish and incarcerate drug users and low-level drug dealers — which seems to be the direction in which things are going.

“I am gravely concerned by what I’ve seen from the current, appointed District Attorney,” Boudin writes today. “We have heard no assurances that the successful programs we’ve implemented will continue, and indeed, we see worrying signs every day as progress is rolled back.”

Boudin touted the Innocence Commission’s “exoneration of a wrongly-convicted man,” as well as “our innovative program tackling auto burglary fencing operations, our creation of a worker protection unit, our litigation against manufacturers of ghost guns, and our historic strides in police accountability.”

In recent elections, SF voters have had a habit of rejecting mayoral appointees as incumbents, both for the DA’s job and on the Board of Supervisors, and that could hold true in November’s election as well, even without Boudin in the race. Suzy Loftus, whom Mayor Breed appointed as interim DA after the resignation of George Gascon, shortly before an election, lost that election to Boudin — and ironically, Loftus could still end up in the mix running against Breed’s latest appointee.

In addition to Jenkins being on the November ballot to hold on to the job, appointed District 6 Supervisor Matt Dorsey will face off against Honey Mahogany, a well-known face at City Hall who served as legislative aide to the district’s former supervisor Matt Haney, and has both his and the local Democratic Party’s endorsement as well.

Jenkins, or whoever else may be elected DA in November, will still have to face another election in November 2023, which is when Boudin’s term would have ended — and Boudin seems likely to throw his hat in again next year. Maybe.