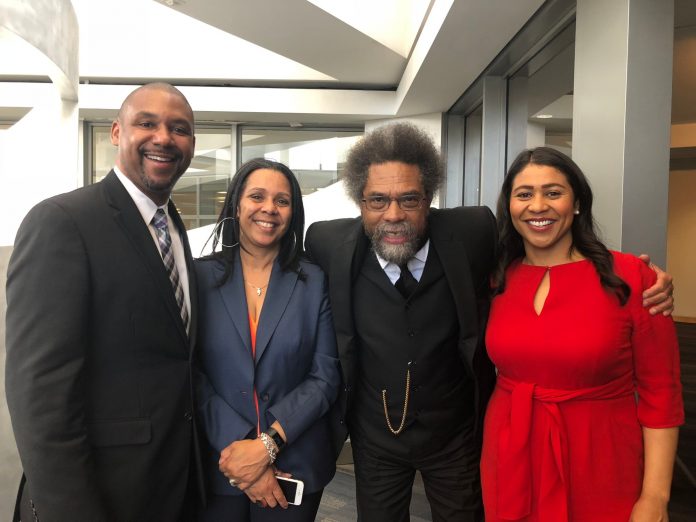 Breed Demands Apology From Sup. Walton Over N-Word Use Toward Sheriff’s Cadet; Walton Says He Might Sue Instead

The war of words over an n-word incident five weeks ago escalated dramatically Monday, with Mayor Breed saying Shamann Walton should apologize to a sheriff’s cadet, and a hardly contrite Walton threatening “he may take legal action.”

The timing of a mini-controversy last week involving SF Board of Supervisors President Shamnn Walton sure did not seem like a coincidence. The week after Walton called for the resignation of school board member Ann Hsu over a racist comment on an online questionnaire, the Chronicle ran a story about a five-week-old incident wherein Walton used the n-word toward a Black Sheriff’s Department cadet at the metal detector security checkpoint to enter City Hall.

NEW: Mayor Breed told me SF supes president Walton should apologize to a Sheriff's cadet he is accused of berating.

Walton told me he "may take legal action" & Breed "should stick to commenting on all the corruption that has existed during her tenure."https://t.co/QtRQCOBfR2

But that mini-controversy has now flared up into a significant war of words between Walton and Mayor London Breed. The Chronicle asked both for comment Monday, and Breed said “an apology should occur” because “It’s very concerning when someone is treated in a way that they feel has been disrespectful.”

Walton shot back, unapologetically, that the Sheriff’s Department’s “depiction of the incident is inaccurate and I may take legal action.”

Board of Supervisors President Shamann Walton, who is Black, acknowledged using the slur “a few times” when he became frustrated about having to remove his belt to go through a metal detector June 24, according to a memo by S.F. Undersheriff Joseph Engler. https://t.co/hctlcSEHyB

It is not in dispute that Walton used the n-word toward a Black Sheriff’s cadet in the June 24th incident. In the Chronicle’s original Friday writeup, they reported that “Asked whether he had used ‘the n-word,’ Walton admitted to using it multiple times and telling the cadet ‘this is some n— shit,’ referring to the direction to take his belt off” at the metal detector checkpoint.

But basically everything else about the incident is in dispute. According to s Sheriff’s Office version of events, “President Walton became very angry with Cadet (name redacted), who is African American, and said, ‘it is N-words like you that looks like me that is always the problem’ referring to the security protocols as some ‘N-word shit’ several times as he yelled at Cadet (name redacted),” a department memo on the incident explained.

The Chron found the cadet, who identified himself on the record as Emare Butler, and added the allegation that Walton also said, “‘You must not know who I am, I’ll whoop your ass.”

Walton contends this is largely fiction. “No other Supervisor has been a [bigger] thorn in the Sheriff’s Department side than me,” he told the Chronicle last week. “Therefore, there is no surprise that incidents [described in the memo] are more colorful and salacious than what I experienced on that day.”

“These incidents are in clear dispute and seek to vilify me and my character,” he added. “I would never expect the Sheriff’s department to provide an accurate account of what transpired between two Black men.”

The Sheriff’s Office sent the Chronicle a statement that Walton, Butler, and Undersheriff Joseph Engler met afterward and talked it all out, and “We consider this particular matter resolved.” But politically, it is definitely not resolved.

Are Asians held to a different standard? An Asian principal is punished for using the "n" word as an example of what not to say. In a school of esl students, many don't know what the "n" word is. Just asking for a friend. 1/2 https://t.co/7ZfVAspofy

The controversy is tailor-made for supporters of the embattled school board member Ann Hsu, and is already being used as pushback to accuse everyone who called for Hsu’s resignation a hypocrite. But to state what should be obvious, yes, it is morally less offensive when a Black person uses the n-word, compared to a person who is not Black saying that. How much less offensive may be continue being litigated in the media if this story has legs (plus you also have hostile workplace issues at play here), and it seems Mayor Breed would like this story to have legs.

“It’s very concerning when someone is treated in a way that they feel has been disrespectful,” Breed told the Chronicle Monday. “Especially when it occurs in front of other people, it can be quite demeaning. That’s the thing that I’m most concerned about. Definitely, the use of that word toward any employee is not appropriate no matter what your race (is).”

“An apology should occur,” she said.

Walton is clearly in no mood to apologize to the Sheriff’s cadet or the Sheriff’s Office. “Their depiction of the incident is inaccurate and I may take legal action,” Walton told the Chronicle Monday. “I should have reported the consistent and constant harassment of this individual, and other cadets, over the duration of my tenure on this Board of Supervisors. I also believe the mayor should stick to commenting on all the corruption that has existed during her tenure.”

Thus far, the few supervisors who the Chronicle could reach (and the board is on summer recess) seem keen to remain neutral. The Chron reported that “Breed and one of Walton’s fellow supervisors have said he should apologize.” But that one supervisor Myrna Melgar used the very measured phrase “Do I think he should apologize to the officer he wronged or hurt? Yes, I think he should,” though added conciliatory words, “We’re all humans. We all fail,” and added she was not “condemning [Walton] for it.”

Supervisors Matt Dorsey and Aaron Peskin did comment, but were measured and neutral in their remarks.

This whole thing is highly reminiscent of Breed and Walton trading countercharges of bullying in June 2021 in the wake of Supervisor Peskin announcing he was seeking treatment for alcohol abuse.

Both Breed and Walton certainly have sharp elbows, and they’re using them. But Breed’s elbows may become even sharper amidst any criticism of her many post-recall election appointees, and Walton likely realizes that any stumbles by those appointees could be Breed’s Achilles heel.

Related: Supervisor Calls for New SF School Board Member to Step Down Over Racist Comments [SFist]