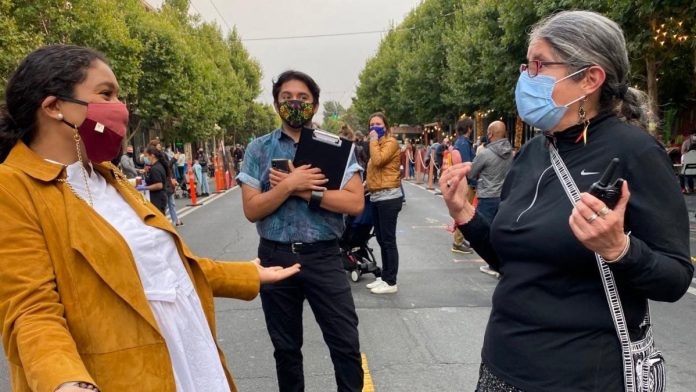 It is no secret that San Francisco Mayor London Breed has had it with pandemic-era lifestyle changes and would like San Francisco to return to pre-pandemic behavior immediately, thank you very much. The latest front for her “Return to Normalcy” campaign may be the Slow Streets program that has limited car traffic on nearly 30 residential streets and effectively turned them into little cyclist, pedestrian, and skateboarder wonderlands.

But two separate incidents this weekend — maybe related, maybe not — indicate the Slow Street party may be ending, or at least, in the first stages of winding down by City Hall decree.

San Francisco responded to the pandemic in incredible ways to create safe and welcoming spaces for our residents to gather. One of these ways is Slow Streets. In Sept., the SFMTA Board will consider the future of the Slow Streets Program. https://t.co/wIEUatPMhc

On Friday, Breed posted a Medium essay entitled “What’s Next for San Francisco’s Slow Streets Program.” (Note how that phrase is posed as a statement, and not as a question.) It is mostly vague, Gavin Newsom-style political speak; there is one paragraph that actually contains the sentence “we can no longer look at Slow Streets on a street-by-street basis,” then three sentences later, declares “we have to recognize that different interventions can be based on different conditions on different streets.”

But there is a very noticeable dog-whistle later in Breed’s post: “The overall Slow Streets Program needs work and needs to evolve,” she writes, adding that “Some streets that were included in the pandemic response make sense and others do not.” And she is definitely drawing a political battle line with the statement, “While there has been strong advocacy for certain streets, we see that the advocacy is often focused on affluent areas.”

Mayors and elected officials around the world are remaking their cities in order to take #ClimateAction, achieve #VisionZero, and make their cities safer, healthier, and more livable and sustainable.

We are looking to leaders in San Francisco to help make us one of those cities. pic.twitter.com/wOM3byMNGI

The only Slow Street Breed calls out by name is Lake Street in the Richmond District, which is a Slow Street from 28th to 2nd Avenues. That one is certainly its own animal, it was one of the four designated permanent Slow Streets, but on July 1, SFMTA announced they were maybe going to backtrack on that one based on community feedback. And the Examiner reported on a June 3 email from Breed’s transportation director indicating the fix was already in, as that email read “Moving forward with Lake Street — open it with traffic calming — informing residents on DATE, and looking to implementation on DATE.”

SFFD emailed us last Thursday, via the SFMTA, and asked us to move all community signs and plants from #PageSlowStreet. While we know this will be a detriment to the safety of those who use #PSS, we're complying, and looking for folks to adopt/reuse current signs. We hope to 1/4

Then on Sunday, not even 72 hours after Breed’s Medium post went live, we see a separate development regarding the Page Street Slow Street in the Lower and Upper Haight. “SFFD emailed us last Thursday, via the SFMTA, and asked us to move all community signs and plants from #PageSlowStreet,” the Page Slow Street group tweeted above. “While we know this will be a detriment to the safety of those who use [Page Slow Street], we’re complying.”

These two events may be totally unrelated, but they sure provide dots to connect, and they indicate that even the “permanent” Slow Streets are definitely still an unresolved issue. So however you feel about Slow Streets, the SFMTA will resume debate on the Slow Lake Street at either their September 6 or 20 meeting, we don’t yet know which.