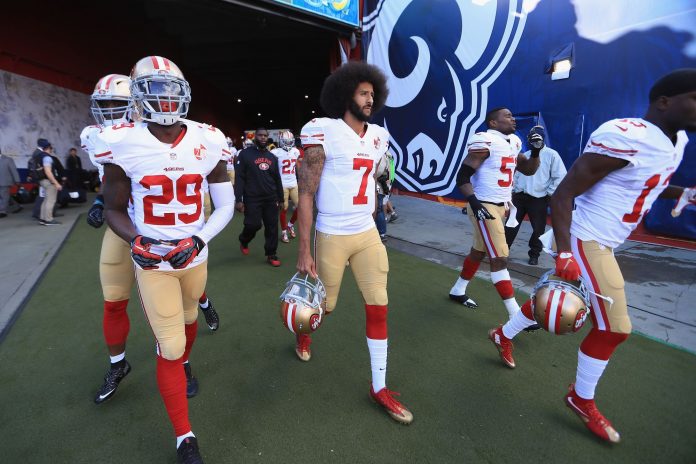 Colin Kaepernick Comeback? He Just Had a Workout Today With the Raiders

The controversial quarterback is now 34 years old, and has not played NFL football in five seasons, but he had an audition workout Wednesday with the Las Vegas Raiders.

San Francisco 49ers fans remember well the season that quarterback Colin Kaperenick went from lovable bicep-kissing hero to national lightning rod for criticism over his kneeling during the National Anthem protests. (As we learned in 2019, he was inspired to do so because of the Mario Woods SFPD shooting.) That was 2016, and Kaepernick technically opted out of his contract at the end of the season, though the 49ers told him they would cut him if he didn’t. No team signed him since, and it didn’t help that Trump was president, though Kaepernick did win a settlement of an unknown dollar amount in his grievance against the NFL for collusion to blackball him.

Kaepernick may find himself blackballed no more. ESPN reports that Kaepernick got a workout with the Las Vegas Raiders, formerly the Oakland Raiders, despite his being 34 years old and not having played NFL football in five seasons.

Colin Kaepernick, who last played football in 2016, the same year he started kneeling during the national anthem to protest racial injustice, is scheduled to work out this week for the Las Vegas Raiders, league sources told ESPN.

“Colin Kaepernick, who last played professional football in 2016 — the year he started kneeling during the national anthem to protest racial injustice — is scheduled to work out Wednesday for the Las Vegas Raiders,” ESPN reported. “It will mark Kaepernick’s first workout with an NFL team since being exiled, and it will be the first time the former star quarterback visits with a team since he flew to Seattle to meet with the Seahawks in May 2017 before they passed on the opportunity to sign him.”

NFL Network’s Ian Rappaport confirmed it was today Wednesday, not next Wednesday.

Current Raiders owner Mark Davis has already supported the idea of bringing Kap back. “I believe in Colin Kaepernick,” Davis told NBC Bay Area a month ago. “He deserves every chance in the world to become a quarterback in the National Football League. I still stand by it. If our coaches and General Manager want to bring him in or want him to be the quarterback on this team, I would welcome him with open arms.”

This may be the closest @Kaepernick7 has come to a comeback since the NFL exiled him. The @Raiders wouldn’t do this if they were happy with their current backup QB options. And he’s better than all of the guys they have. If they’re smart, they’ll sign him. https://t.co/IlbLdrZzK3

It would be great to see the guy get another chance, so let’s consider this from a football perspective. Raiders starting quarterback Derek Carr just signed a $126 million contract, so Kaepernick would surely be a backup. The Raiders’ other current backups are Jarrett Stidham (acquired via trade with New England), Chase Garbers (fresh out of Cal!), and… Nick Mullens.

Related: Colin Kaepernick is Back in the NFL — Virtually — in ‘Madden NFL’ Video Game [SFist]

LOS ANGELES, CA – DECEMBER 24: Colin Kaepernick #7 of the San Francisco 49ers walks to the field before the game against the Los Angeles Rams at Los Angeles Memorial Coliseum on December 24, 2016 in Los Angeles, California. (Photo by Sean M. Haffey/Getty Images)