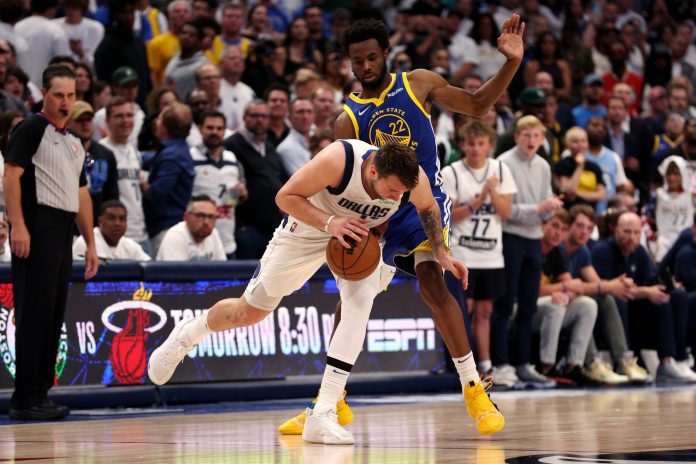 It was the second-quarter starting line of Klay Thompson, Jordan Poole, Kevon Looney, Jonathan Kuminga and Moses Moody where things started to come off the rails for the Golden State Warriors last night. But it was also a variation of that very line that almost pulled-off a mind-blowing comeback late in Game 4 of the Western Conference Finals. The Warriors would eventually fall short, losing 119-109 and facing a Game 5 tomorrow in San Francisco.

Game 4 began as an ultra-competitive, back-and-forth battle from the tip off. Dallas’s ice-cold shooting from Game 3 had thawed, and everyone on the Maverick’s roster who had struggled in the previous game was bottoming shots. Everything the Mavs hadn’t been doing, like rebounding and crashing the paint, they did very well last night. Everything was firing on all-cylinders for Dallas.

After going 0-7 from distance in Game 3, Reggie Bullock had 18 points on Tuesday, Dorian Finney-Smith had 23 points, Jalen Brunson had 15, Maxi Kleber had 13, and Spencer Dinwiddie had 10. Oh yeah: Luka Doncic had 30 points, 14 rebounds and 9 assists, coming in just shy of a triple double.

The Warriors shot 48.8% from the field to the Mavericks’ 50% last night, but it was the three-ball that was difference: Golden State shot a little under 36% from distance to Dallas’s 46.5%.

It was 28-24 Mavs at the end of the first quarter, when the Warriors played their bench-intensive lineup. Johnathan Kuminga saw his first playing time in the Western Conference Finals, and Moses Moody continued to get minutes. Along with Jordan Poole, Klay Thompson and Kevon Looney, the five managed a very brief one-point lead, before the Mavericks started to pull away.

When Stephen Curry, Draymond Green and Andrew Wiggins finally returned in the second quarter, the Mavericks never let their foot off the gas. The lead went to 16, to 20, to 25, and the game started to take on a bit of the Game 5 vs. Memphis vibe.

Still, after being down by as much as 29, the Warriors cut the lead to 8 with about three-and-half minutes left.

Luka Doncic played another outstanding game of basketball last night. He made several timely shots late in the fourth quarter, like this defense-splitting dunk, that fended off a Warriors’s comeback. (Photo by Tom Pennington/Getty Images)

Unusually, there was a rain delay before the start of the second half. No, the Mavericks don’t play in an outdoor arena. The roof at American Airlines Center began leaking as rain fell on Dallas, and a pile of towels were assembled at the Warriors’ end of the floor to battle the deluge. (As Mavericks’ billionaire owner Mark Cuban watched from the front row, some kind of metaphor about the systemic failures of capitalism began to coalesce.)

Some announcers said that the delay would favor the Warriors, but it didn’t. The Mavericks kept rolling.

Late in the third quarter, all of Golden State’s starters were on the bench and presumably done for the night. On the floor was Poole, Kuminga, Moody, Damion Lee and Nemanja Bjelica. The five broke out their chisels, and started to slowly, steadily chip away at the insurmountable lead. Johnathan Kuminga would score 17 points, Jordan Poole 14, and Moses Moody 10.

“If you wear a uniform for Steve Kerr, he’s going to play you at some point — even in big games,” TNT announcer Stan Van Gundy said at least several times last night as the less-familiar faces graced the Warriors’ lineup — both when the game was in hand, and once it was quite out of hand.

Rookie Moses Moody has been playing with confidence and poise during his minutes in the Western Conference Finals. He had 10 points last night. (Photo by Tom Pennington/Getty Images)

The lead was down to 17 with about five minutes left. Moses Moody hit back-to-back three pointers. The Warriors got a stop, Kuminga got to the free-throw line, made both, and it was down to 11. Another stop by the Dubs, the ball came back the other way and eventually found Kuminga in the corner; he shot the three, splash. The lead was down to 8 with 3:22 remaining.

Was this really going to happen? Would the series end on a Tuesday in Dallas?

At the postgame press conference, a reporter asked Stephen Curry, “At what point did that fourth quarter rally perk you up?”

Curry replied: “Probably JK’s three in the corner. It was a different feeling, and the nervous energy in the building, and our guys were just out there hoopin’. It was fun to watch.”

Steph Curry would come in for Damion Lee, but Luka Doncic kept driving into the paint, even through the Warriors’ zone defense. Wiggins and Thompson also came back into the game, but the Mavs kept burying shots, and the comeback had gone as far as it would go.

A few hours before the start of last night’s game, Warriors’ head coach Steve Kerr sat down in the press-conference room and spoke about the horrific elementary-school shooting in Uvalde, Texas, which is about 350 miles from Dallas. Kerr spoke with raw, quivering outrage. “When are we going to do something?” he shouted.

When last nights’s game started, I thought: “Who cares about a stupid basketball game right now?” In writing this story today, I was reluctant to use the words “shooting,” “fired a shot,” etc. The show must always go on, but simply carrying on as normal feels disgustingly familiar. It feels like complicity.