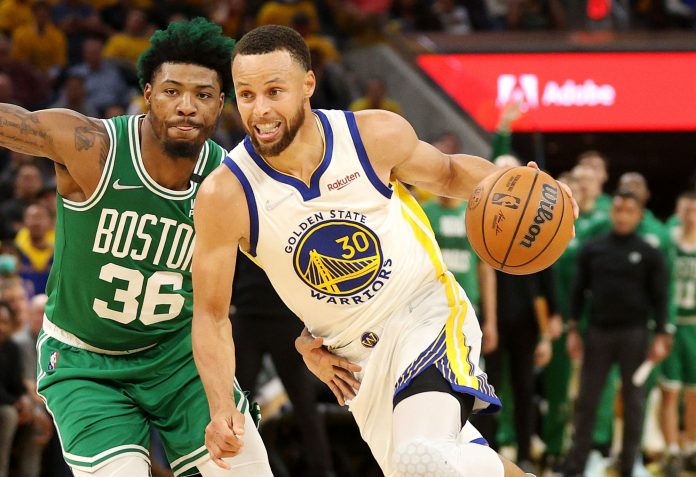 Crushed In the Fourth Quarter, Warriors Drop Game 1 of the Finals to Celtics

Nothing went right for the Golden State Warriors in the last half of the last quarter of Game 1 of the NBA Finals, but everything — absolutely everything — went right for the Boston Celtics, who tied the game with a little more than five minutes left. It seemed like we were in for a grind-out, down-to-the-wire finish, but Boston went on a 17-0 run late to slug their way to a 120-108 win to open the Finals.

Nothing had been going especially well for Boston superstar Jason Tatum, who had just 12 points last night, but it didn’t matter, because everything was going right for Al Horford, Jaylen Brown, Derrick White and even Marcus Smart, who — along with Horford — hit a few nail-in-the-coffin three pointers late to hand the Warriors their first lost at home this postseason; it’s also the first time the Warriors have been down in a series in the playoffs this year.

“It’s not ideal,” understated Stephen Curry at the postgame press conference. “But, [we] believe in who we are and how we deal with adversity, how we’ve responded all year, and how we respond in the playoffs after a loss. There’s a lot of bright spots to how we played — [we] gotta get over the tough feeling of letting one slip away.”

Super-veteran Al Horford, a 36 year old playing in his first-ever NBA Finals after being on four teams, quietly led the Celtics in scoring last night. Horford went 6-8 from distance, and hit a few big threes late to seal Game 1 for Boston. (Photo by Ezra Shaw/Getty Images)

The Celtics seemed a little lost on defense to open the game. After a few of Stephen Curry’s six made three-pointers in the first quarter — a new NBA Finals record — several players in green were standing around looking at each other, hands sometimes up in the air in exasperation.

The Celtics would give up several wide-open looks, and Steph made them pay almost every time. After scoring 21 points in the first quarter, it looked like Curry might be headed for a 50-point night. He cooled off as the game went on, and Boston seemed to find their defensive rhythm in guarding the constantly moving Curry. “Consider a single possession of the second quarter,” the New York Times wrote, “as Curry tried to work himself free by coming off a series of screens. White defended him, then Tatum, then Smart, the league’s defensive player of the year. Surprise: Curry could not find an opening.”

Stephen Curry shot and drove to the rim well last night, but was quieted in the fourth quarter as Boston made nearly every shot they put up. (Photo by Ezra Shaw/Getty Images)

Were we witnessing an obvious manifestation of Golden State’s much-talked-about superior-Finals experience? ABC aired some statistic that the Warriors had 123 total Finals’ games to the Celtics 0, then contemplated the pros and cons of said experience, deciding that any given team pretty much has a 50/50 chance of winning any given game. (That statistic brought to you by Captain Obvious.)

Andrew Wiggins’ excellent playoff flow continued in Game 1 — he was a little cold from distance, going 2-7, but seemed to compensate immediately with a solid midrange game, shooting 8-15 from the field. With 20 points, he was the Warriors’ second-leading scorer behind Steph Curry.

Andrew Wiggins’ offense was on point last night. After smothering Luka Doncic in the Western Conference Finals, will Wiggins also carve out a defensive niche against Boston? (Photo by Ezra Shaw/Getty Images)

At one point in the first half, Andre Iguodala and Otto Porter checked into the game, and all of the questions surrounding their health and possible return to play were answered in a brief moment. Iguodala has been out since the Denver series, and had an efficient 12 minutes of play last night, going 3-4 from the field and 1-1 from distance. (Gary Payton II was also in uniform, but did not play any minutes last night.)

Porter, who went out in the Western Conference Finals with a foot injury, had a huge presence last night. All of his 12 points came from his 4-5 shooting from distance, and all of them seemed timely.

The Warriors would lead by as much as 15 last night, and it really was a spectacular game — exactly what you would expect from the two teams that had made it to the Finals. But the Warriors never felt like they could pull away, because the Boston terrier was always nipping at their heels, and burying shots.

Just as I was about to say, “Wow, the Warriors have barely turned the ball over this game,” they had a rash of giveaways, going 14 to Boston’s 12 last night. It never felt catastrophic, though, or like a significant part of the story line.

The story line was Boston’s red-hot shooting in the last half of the last quarter.

Derrick White was Boston’s third leading scorer last night with 21 points off the bench, shooting 6-11 from the field and 5-8 from three. All of his shots seemed to deflate any Warriors’ momentum. (Photo by Ezra Shaw/Getty Images)

“Obviously, they made a lot of shots,” Stephen Curry said of Boston’s fourth-quarter performance. “It seemed like they didn’t miss until deep into the fourth. When you have a team that finds a little bit of momentum like they did, and they keep making shots, it’s tough to regain that momentum.”

Related: Warriors and Celtics Meet In Historic Finals Matchup This Week, and Odds Are on Six or Seven Games