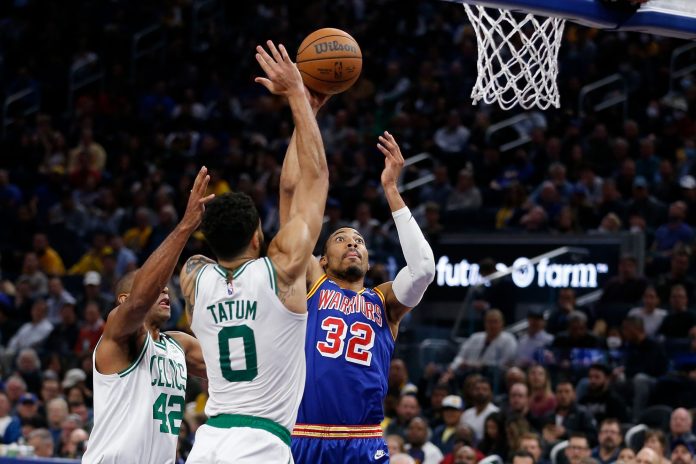 Warriors and Celtics Meet In Historic Finals Matchup This Week, and Odds Are on Six or Seven Games

On April 2, the Golden State Warriors were getting crushed by the Utah Jazz, and seemed destined for their fifth-consecutive loss. At that point in the season, the Warriors had lost seven out of eight games, stretching back to a March 16 loss to the Boston Celtics where Steph Curry suffered a foot injury, ending his regular season. Though they seemed destined to make the postseason, the Warriors had yet to clinch a berth, and had been falling (you could say plunging) in the standings. Everything seemed to teeter on the verge of coming together, and on the verge of falling apart.

But in the last half of the last quarter on April 2, the Warriors fought their way back against the Jazz, going on a 23-3 run to earn a triumphant, feel-good W that marked the start of a five-game winning streak to end the regular season. The Dubs would finish with the third-best record in the NBA to start their playoff run, and if they made the Finals, they’d have home-court advantage against any team in the east.

That Utah game seemed to be a turning point in every conceivable way. The Warriors clinched their playoff spot that night, but more importantly, their momentum began to roll, roll.

Will Golden State’s inertia carry them all the way to the NBA mountaintop?

It’s not quite the mountaintop, and not quite the trophy ceremony that the Warriors, or their fans, are seeking, but winning the Western Conference Finals sure felt good. (Photo by Thearon W. Henderson/Getty Images)

In facing the Boston Celtics in the NBA Finals, it will be a proper geographic West Coast vs. East Coast showdown, with both teams representing the more northern latitudes of their respective sides of the country, and representing significant dynasties and cities that share bonds in many ways. Will there be side bets between mayors? Will someone please troll Bostonians with the claim that San Francisco has the better clam chowda?

It has been 58 years since the Golden State Warriors played the Boston Celtics in the NBA Finals. In 1964, Wilt Chamberlain faced Bill Russell in the postseason for the first time — the Celtics won that series 4-1.

This week, a reporter asked Warriors’ head coach Steve Kerr if there was a certain “aura” around the Celtics. “For sure — I think anybody with a subjective point of view would tell you that the Celtics and the Lakers are the two biggest brands in the game. There’s just something about playing in Boston that feels special. Their fans love the game, there’s a great energy. It’s classic NBA stuff.”

Wilt Chamberlain and Bill Russell battle in the old Boston Garden, some years ago. (Photo @warriors)

Warriors’ majority owner Joe Lacob, a Massachusetts native, was a minority owner of the Celtics for four-and-a-half years, until about 2010. “Boston was very important, and those guys were very helpful,” Lacob told the San Francisco Chronicle. “They’re friends to this day… not too close friends, though — I’m very competitive about this, and I’m sure they are, too.” (The Chronicle article is titled, “Joe Lacob wants to crush the Celtics, his childhood team.”) At a press conference this week, Lacob mentioned iconic Lakers’ owner Jerry Buss’s 16 Finals appearances in 33 years. “We’ve now made six in 12 years,” Lacob told the Chronicle. “I love the 50% rate. Whether we’ll continue that, I don’t know.”

Boston is tied with the Lakers for the most NBA Championships with 17. (Now feels like as good a time as any to remind everyone that L.A. was practically ordained to win it all this year.) The top three teams with the most appearances in the NBA Finals are: the Minneapolis/Los Angeles Lakers with 32, the Boston Celtics with 22, and the Philadelphia/San Francisco/Golden State Warriors with 12 appearances.

If the NBA playoffs are like a video game where every level is more and more difficult, then Jason Tatum, top, and Marcus Smart are worthy, final-stage opponents. (Photos by Lachlan Cunningham/Getty Images)

The Warriors and Celtics split their two-game series this season: The Warriors won in Boston in December 2021, the Celtics beat the Warriors in the aforementioned game in March, when Marcus Smart dove for a loose ball, resulting in Steph Curry’s tweaked foot. In that game, the Celtics showed the stifling, “playoff-like” defense which defined the second-half of their season and has propelled them to the Finals.

“Despite the offensive strengths of each team, this series will be a defensive clinic on both sides,” ESPN wrote. “This is the first Finals to feature the top two teams in defensive efficiency since 1996, when the Chicago Bulls defeated the Seattle SuperSonics.”

Will Gary Payton II make a triumphant return to the Warriors’ lineup for the NBA Finals? The Warriors have said that there is a distinct possibility that they will consider reevaluating the likelihood of issuing a definite maybe. (Photo by Justin Ford/Getty Images)

The Warriors will have had a full week of rest before tip-off tomorrow night. “We gave the guys two-straight days off, which is almost unheard of not only in the playoffs, but in the regular season, too,” Steve Kerr said a few days ago. After sweeping the Brooklyn Nets, Boston has played two ultra-physical, grind-out, seven-game series, first dethroning the defending-champion Milwaukee Bucks, and finally closing out the Miami Heat on Sunday.

While the Warriors (and most teams, I’m sure) keep news about injuries close to the vest, they’ve offered a few non-update updates about Gary Payton II, Otto Porter Jr., and Andre Iguodala. On Monday, Kerr said that those three players did not scrimmage, but all took part in practice, adding this upbeat but cryptic proviso: “So they’re all progressing and doing pretty well, and we’ll have an update again tomorrow and the next day. We’ll just see where it all goes,” Sports Illustrated reported.

Garry Payton II, who has been out since Game 2 against Memphis with a fractured elbow, is as close as you can come to putting X-factor on tap.

Yesterday, Draymond Green was asked what it would mean to have GP2 back in the lineup. “Gary’s been a huge part of what we’ve done all year. It’s adding another really, really, really, really, really good defender, and another body that we can throw at JT [Jason Tatum] and Jaylen Brown. Guys like that, you can’t throw them the same look over and over again.”

Will we see Otto Porter Jr. back in the lineup grabbing rebounds and nailing mid-rangers and three-pointers? (Photo by Lachlan Cunningham/Getty Images)

On his podcast, Green said, “The thing that keeps me up at night most about this series, honestly, is our health,” referring specifically to Payton and Porter.

With Steph Curry’s sudden regular-season-ending injury against the Celtics in March, one is reminded just how physical the game is, and how vulnerable even super-fit athletes are. (In Game 3 against Miami, Marcus Smart rolled his ankle, and immediately fell to the floor screaming in pain. Watching the gut-wrenching replay, it seemed obvious that his season was over, but he returned the same quarter, and has been playing well ever since.)

The other thing that keeps Draymond up at night: turnovers, which is something Golden State seemed to clean up as the Western Conference Finals progressed. “The Warriors will win the NBA Finals if we control our turnovers,” Green said.

There seems to be almost universal agreement among experts that the Finals will go at least six games, but more likely seven.

Steven A. Smith: “Put me down for seven games. Steph and the Warriors close it out at home, game seven in San Francisco.

Shannon Sharpe: “I believe the Celtics, this is a more favorable matchup for them because of the firepower that they posses. I’m gonna say the Celtics take it in seven.”

Skip Bayless (responding to Sharpe): “I like your in-seven pick, but in the end, the Warriors are going to win a seventh game at home.” (Take all of these predictions with whatever grains of salt you season your listening to experts with. In April, Bayless predicted a Memphis vs. Miami Final, while Sharpe called the Suns vs. Milwaukee. So, yeah.)

Related: Chase Center Announces It Will Open for Indoor Viewing of Away Games During NBA Finals

Facebook
Twitter
Pinterest
WhatsApp
Previous articleYou’re Finally Going to Be Able to Unsend and Edit Sent Texts on the iPhone
Next articleCrushed In the Fourth Quarter, Warriors Drop Game 1 of the Finals to Celtics