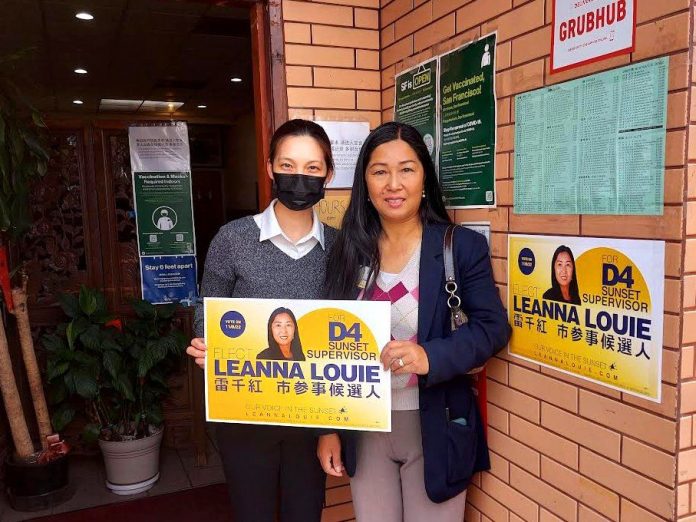 D4 Supervisor Candidate Leanna Louie Defends Her Residency Record, But Now a Fourth Address Is In the Mix

With voter fraud investigation referrals to both the District Attorney and City Attorney, District 4 supervisor candidate Leanna Louie is at risk of being pulled off the ballot over residency issues, and it appears she has a fourth District 11 address to answer for as well.

Supervisor candidate Leanna Louie has brought visibility to her campaign with a combination of grandstanding and shit-stirring, with a larger-than-life social media presence — much of it based on animosity against Chesa Boudin and aggressive school board recall sentiment — with which she hopes to unseat incumbent Gordon Mar.

Yet this may have backfired. Last week, a Mission Local investigation of those posts turned up evidence that she may have illegally voted in a district she did not live in, bouncing between three different addresses in a three-month period. Moreover, she may have not lived in District 4 for the 30 days required of a candidate seeking that seat on the board.

Mission Local is totally inaccurate in reporting. Fake news. I registered my 94116 address on 3/8/2022. The Dept of Elections sent ballots to my old registration address in 94124 in April 2022. I did my civic duty by voting.

A Tuesday follow-up report by Mission Local reported that Louie’s residency questions had set off City Attorney and District Attorney investigations. (That report also details a fourth different address in  District 11, where there may be lease violations, but nothing that would affect election eligibility.) Louie was hilariously curt in her response to that report, telling Mission Local  “You and the Weather Underground can wait” for a response, a reference to the 1960s radical group and Chesa Boudin’s father’s incarceration.

But Louie did open up more for an exclusive interview with the Chronicle published today, blaming the irregularities on duplicate mail-in ballots, registration lags, and even mold in one of the four units she owns. And she insisted she’s in line with the 30-day rule to appear on the District 4 ballot.

“There’s no question about it,” Louie told the Chronicle. “I wouldn’t be running if I didn’t.”

It turns out she also co-owns a home in District 11. https://t.co/CmnFw4NQll

She clearly has a problem on her hands with an active investigation from City Attorney David Chiu. A Monday letter from Chiu’s office demanded an in-person interview, plus a slew of utility bills and residence documents. And yes, Chiu’s office can have her removed from the November ballot.

The Chronicle reports that “City lawyers hope to conclude their investigation of Louie’s residency before Sept. 5,” so that investigation will likely be wrapped by Labor Day.

But would District Attorney Brooke Jenkins perform any sort of real investigation into Louie? Golly, these two seem pretty tight in the post above! The Chronicle reports that “Elections Director John Arntz confirmed to The Chronicle that he had ‘referred the matter of (Louie) possibly voting a ballot sent to a former address to the District Attorney’s Office.’” But that doesn’t mean Jenkins will lift a finger on the matter, and to state the obvious, there are already ethical questions about Jenkins and recall organizing.

The most serious question Louie is facing is detailed in her Facebook post above. She grandstands about voting for Matt Haney in the AD-17 state Assembly race, though her residency at the time was across town, as she was registered in the Sunset, a different Assembly district.  SF Elections director John Arntz tells Mission Local, “She voted a ballot that was sent to a previous address for a contest in which she was not eligible to vote.”

Louie explains this differently. “I got the ballot, so I voted, because I was still in transit,” she told the Chronicle. “I figured that, because I already registered to vote at my new address, that my next ballot would automatically go to the new address.”

That vote triggered a re-registration to her previous address in District 10’s Bayview. It’s going to be up to the City Attorney and Department of Elections to determine whether this was malfeasance, or just a forgivable bureaucratic lag.

“How can you (Mar) support the school board members and Chesa Boudin?” said Louie, who collected signatures and campaigned for both recalls. “He is just totally out of touch with the people of the Sunset.”

But boy is this easy pickins for her opponent Gordon Mar, of whom Louie has been fanatically critical.

“The Sunset deserves a representative with a clear commitment to the neighborhood and a solid record of delivering for its residents,” Mar told the Chronicle. “It is incumbent upon the Department of Elections, City Attorney and District Attorney to conduct a full, fair and immediate investigation of this matter, and to take all actions needed to protect the integrity of the election.”

Yet it’s kind of a sticky situation for the other candidate in the race, Joel Engardio. He and Louie were a forming a sort of One-Two ranked-choice strategy, as the Chronicle reported in July, Engardio and Louie “want to take advantage of the city’s ranked-choice voting system by asking voters to pick either of them as their first or second choices, hoping to increase the odds of ousting Mar.”

In today’s Chronicle piece, Engardio merely told the Chron, “This is an issue that should be handled by the city attorney.”

Leanna Louie probably would not be in this situation if she didn’t overshare so much on social media. She will likely face no blowback from (her friends at?) the DA’s office, but the City Attorney investigation is an existential threat to her campaign. We’ll see come Labor Day.