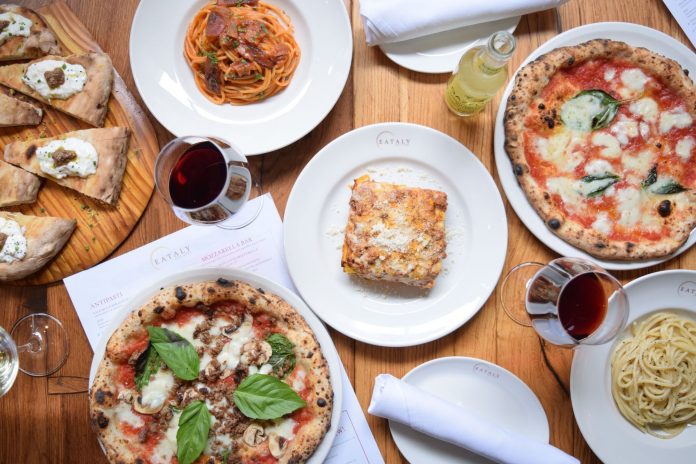 First Bay Area Eataly Location Gets an Opening Date, and Here Are Some Food Pics

We have a June 16 Grand Opening now officially scheduled for Santa Clara’s Westfield Valley Fair location of the Italian food emporium Eataly, which will be a staggering three stories, 45,000 square feet, and have two dedicated restaurants.

Shopping malls are suddenly cool again, or at least, the ones that have put in really good food courts. The Stonestown Galleria food court has rejuvenated that mall, plus it’s getting a Shake Shack later this year. The downtown Westfield Centre food court also added a Shake Shack to its roster of primarily fast-casual restaurants.

None of these additions are as ambitious as the long-anticipated Westfield Valley Fair location of Eataly, the Italian grocery store/restaurant/salami counter/caviar bar that started in Torino, Italy in 2007 and has since gone global. And while that San Jose Eataly had its opening delayed about a year because of the pandemic, the Chronicle reports that Eataly Silicon Valley will open on Thursday, June 16.

Eataly provided SFist with these preview images, and a statement detailing the opening.

“The Italian food mecca will feature its renowned mercato with more than 10,000 local and authentic Italian products, two full-service restaurants showcasing regional, authentic Italian cuisine, multiple quick-service and fresh counters, as well as an impressive wine collection from the 20 regions of Italy,” the company tells us.

Yes, this is the same Eataly that originally partnered with celebrity chef Mario Batali, and cut ties with him after the rash of sexual misconduct allegations were lodged at Batali in 2019. But Batali has had no direct involvement with Eataly since 2017, and his product line of sauces, etc., is no longer on the shelves.

Eataly has its New York City flagship location in the Flatiron District that opened in 2010, plus other locations in New York’s Financial District, Chicago, Boston, L.A., Las Vegas, Toronto, and Dallas.