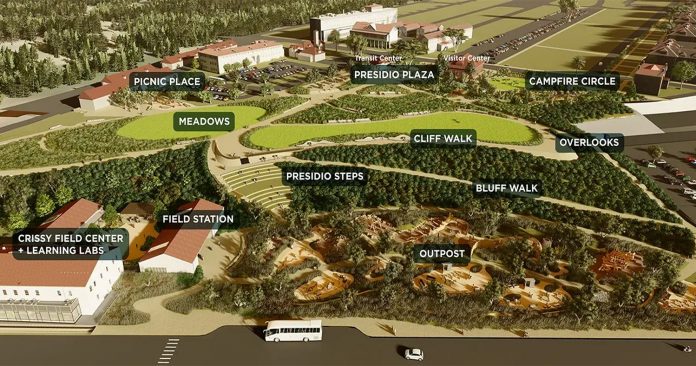 The Presidio Trust is seeking food trucks and vendors to fill revolving slots at the new Tunnel Tops park area, and they’re also still looking for a restaurant operator to fill a large space in a new building there as well.

As SFist previously reported, the Presidio Tunnel Tops area, designed by the renowned landscape architects who did New York’s High Line, is finally opening to the public on July 17. And it turns out the Presidio Trust hasn’t yet lined up all the food service vendors it will need to serve the estimated 900 to 2,300 people who are expected to be checking out the 14-acre Tunnel Tops on a daily basis and seeking refreshment and/or food.

The Trust says it is seeking “vendors who offer delicious food at approachable prices that celebrate the best of the Bay Area.”

Next Wednesday, May 25, is the first quarterly deadline for vendors to apply to the Presidio Pop-Up Program — and the application process is set to move very quickly. Qualified vendor applicants will be informed two days later, on May 27, if they’re invited to come to a June 1 tasting event in the park with food samples, and by June 15 the first mobile vendor lineup will be finalized.

The next application deadline for fall slots — between October 1 and December 31 — will be August 1.

“We are looking for a mix of rotating food options that include, but are not limited to, breakfast/brunch items such as coffee, pastries, and bakery items, a wide variety of ethnic food choices (e.g., baos, tamales, banh mi, etc.) that are both family friendly and easy to eat while enjoying the park,” the Trust says on the program application site. “We welcome grab-and-go healthy options such as sandwiches, grain bowls, soups, and hearty salads, as well as plant-based options. Lastly, we seek vendors who offer a variety of treats such as ice creams, snacks, and to-go alcohol.”

This is an opportunity for mobile vendors of all stripes, with spaces for food trucks, trailers, carts, and tents scattered at several locations around the new 14-acre park area — which is sure to be a big draw for locals and tourists alike.

Vendors will be required to agree to two shifts per week, with one of those occurring on a weekday.

Rendering courtesy of the Presidio Trust

Simultaneously, as the SF Business Times reports, the Presidio Trust still has a 6,000-square-foot restaurant space to fill in the new Building 201 in the Tunnel Tops area. That’s a ten-year lease deal, and they’re seeking a “multi-faceted food service experience.” Interested parties can find info here.

They’ve also still got the former Commissary space to fill on the Main Parade Lawn, and that’s a 4,200-square-foot space at 101 Montgomery Street.

As we learned last month, the former Arguello space — which, like the Commissary, was previously operated by chef Traci Des Jardins — has reopened as Colibri Mexican Bistro, a reincarnation of the former Union Square restaurant. The group behind Colibri, now known as Presmex Restaurant Group, is also opening a cafe of some kind in the 1,000-square-foot former Transit Cafe space at the Presidio Transit Center (215 Lincoln Boulevard). The Chronicle had earlier reported that Presmex was opening something in the Tunnel Tops area, which is sort of true — the Transit Cafe is one of two spaces available, and it’s an existing space at the edge of the new area.