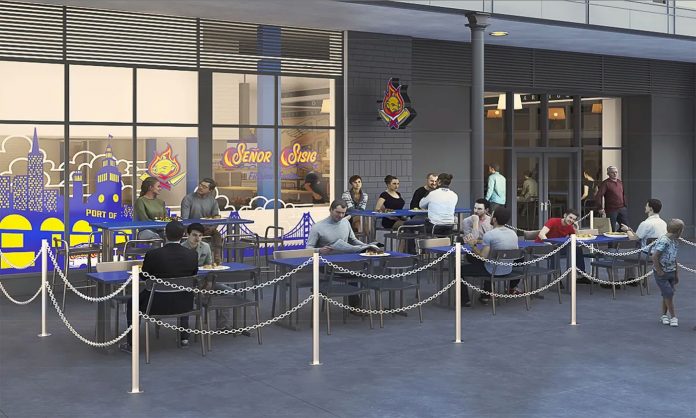 Food truck star Señor Sisig is planning a third brick-and-mortar location, and it promises to be the swankiest location to date for the brand in San Francisco’s Ferry Building.

As Eater reports today, Señor Sisig is taking over the Ferry Building space (#41) that was vacated by Brown Sugar Kitchen in early 2020 — and which was formerly home to Il Cane Rosso in years past. And because the new digs will come with some outdoor seating space at the back of the building, owners Gil Payumo and Evan Kidera are planning to offer some expanded menu offerings, including some new seafood options and pulutan, or shareable dishes.

And while beer and wine is available at the Mission location, the Ferry Building spot is going to come with a full liquor license, and Payumo and Kidera are planning a cocktail menu with tropical flavors like calamansi and ube as potential ingredients.

Best known for their Mexican-Filipino mashups like burritos made with pork sisig and chicken adobo, Señor Sisig has steadily grown from its food-truck beginnings to a mini-empire in the Bay Area. Payumo and Kidera opened their first brick-and-mortar shop in SF’s Mission District in 2019 — adding a cheeky nod to Taco Bell’s Crunchwrap to the menu — and that was followed by the debut of their Oakland location in early 2021, offering a full vegan menu alongside the regular offerings.

With the help of Local Kitchens and their micro-food halls, you can also now order Señor Sisig’s food in San Jose, Mountain View, Palo Alto, Cupertino, Lafayette, and Roseville. And the Señor Sisig trucks still make regular appearances around SF and the Bay Area, at SPARK Social, Off the Grid, and elsewhere.

The Oakland location of Señor Sisig is going to be relocating nearby this year, to the new Zo apartment complex by Lake Merritt, and that location will also have a cocktail menu and full bar, as the Chronicle previously reported.

Longtime friends and food lovers, Payumo and Kidera and decided to launch their food-truck business together back in 2008, at the height of food-truck mania around California elsewhere. Inspired in part by the success of Roy Choi and his Kogi BBQ truck in LA, which serves tacos with Korean-style meats, Payumo and Kidera decided to meld Payumo’s Filipino heritage with the Mexican food they love in the Bay Area.

As the pair told Hoodline several years ago, they don’t see themselves as “pioneers” of Filipino food, but they feel they found success by offering American palates simplified versions of Filipino flavors in new contexts. ““We were able to have something new in two ways: a food truck and a new cuisine no one has ever seen,” Kidera said.

Look for the new Ferry Building location of Señor Sisig to open across from the entrance to Slanted Door sometime this summer.