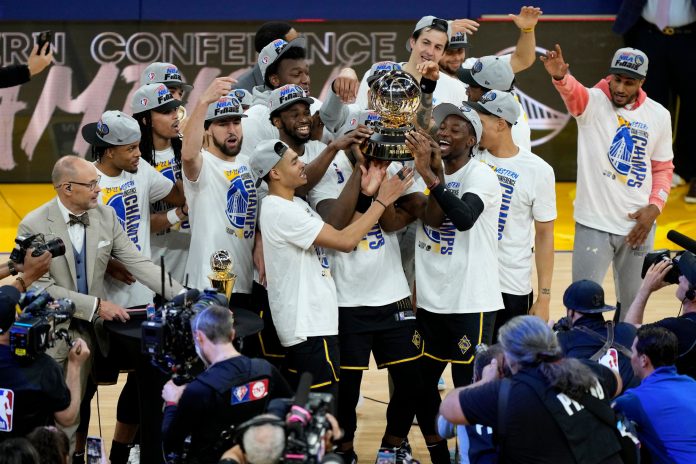 Warriors Beat the Mavericks, Beat the Odds to Advance to NBA Finals

Celebrations for Conference Finals can feel a little awkward, and a little premature. It’s not to say that the Golden State Warriors don’t have cause for celebration. After beating the Dallas Mavericks 120-110 last night to close out the Western Conference Finals 4-1, the Warriors have already done what few people (other than hardcore fans) expected them to do.

The Warriors have gone from dynasty to wounded cellar-dwellers to a concoction of a new team combining an old guard and several fresh and — until two months ago — untested-in-the-postseason faces. They were a team with all the right ingredients who were still battling injuries, and who had yet to congeal into a battle-tested group.

Break out the ‘2021-22 Western Conference Champions’ hats and T-shirts, and the presentation of shiny, basketball-shaped hardware. In the ensuing interviews and reports last night, you could have made a drinking game out of every time someone said “…In the Finals for the sixth time in eight years.” Reporters would ask the Warriors’ lineup variations of these questions: “How does it feel to be back in the Finals after a two-year absence, after a 15-win season two years ago, after suffering so many injuries, set-backs and hardships? How does this moment compare to other all-time, greatest moments?” Reporters asked, “How are you different, personally, than the last time you were in the Finals?”

The Warriors reflected, celebrated, and stipulated: This win is great — it’s great to be in the Finals.

But the mission is not complete.

Klay Thompson was on fire last night, and after the game, a few reporters wondered if he needs another moniker: “Game 5 Klay”? (Photo by Thearon W. Henderson/Getty Images)

Game 5 had that high-stakes, elimination feel from the tip-off, with both teams going tit-for-tat at each end of the floor. For the Warriors, it was Kevon Looney scoring on the inside and battling for rebounds, it was Stephen Curry, constantly in motion, doing a little bit of everything, it was Draymond and Wiggins (they had 17 and 18 points respectively), and it was Klay Thompson finding his rhythm early and burying shots.

It looked like the Warriors could have just rolled right over the Mavericks, as if gravity would pull them into the orbit of the NBA Finals.

But the Dallas Mavericks managed to pace Golden State. It was a little Luka Doncic early, it was Reggie Bullock hitting a few threes and seeming to pick up where he left off in Game 4, and it was the defense and timely scoring of Maxi Kleber that kept the Mavs within about five points. A Draymond Green three-pointer late in the first quarter was met with a Spencer Dinwiddie three-point buzzer-beater, and it was 28-23 Warriors after 12 minutes.

Was this going to be a nail-biter?

Kevon Looney had a double-double last night, and continues to shine for the Warriors. (Photo by Thearon W. Henderson/Getty Images)

In the second quarter, it was Jordan Poole, it was the defense and scoring of Nemanja Bjelica, it was Moses Moody hitting a few big shots off the bench, and it was more Klay Thompson being Klay — on his way to a 32-point, 50%-shooting night. The Warriors led by as much as 20 going into the third quarter, and that train that had been gaining steam now seemed to be going full-speed. Destination: Boston or Miami.

After the Warriors’ Game 3 win and 3-0 series lead earlier this week, I asked, “Have the Dallas Mavericks ever felt like they were really in the Western Conference Finals?” In the second quarter, the Mavs seemed out of gas — especially Luka Doncic, who only had something like six points in the first half. The TNT announcers said that Doncic was “playing very poor defense,” barely running back up the floor after Golden State fast breaks, and failing to “lead by example.”

The Warrior lead was about 20 for most of the third quarter, and I started to think about the Boston or Miami scenarios.

Luka Doncic had 28 points and 9 rebounds last night in Game 5, and got hot late in the third quarter, fueling a Mavericks’ run. But he never seemed to have that killer instinct. Did Doncic — and the Mavericks as a team — throw in the towel too soon? (Photos by Ezra Shaw/Getty Images)

Cue the last two minutes of the third quarter, when it was Luka hitting threes at will. Dallas went on a 15-2 run, cutting the Warriors’ lead to 8. It was a little nerve-racking, for sure, but it never felt like the Mavs were going to claw their way back.

The lead was back to 15 early in the fourth. It was a Kevon Looney rebound and pass to Nemanja Bjelica with about eight minutes left in the fourth quarter; Bjelica took his time to line up a three . . . Splash. Then it was a Steph Curry block on a Dorian Finney-Smith three-pointer, causing the shot clock to expire, with about four-and-a-half minutes left. Then it was another Kevon Looney offensive rebound — he had 18 boards on the night, plus 10 points — then a pass to Klay Thompson for a three: Splash.

And then it was a Curry corner three (splash) with two minutes left, making it an 16-point game, where I folded my hands under my head, and made Steph’s trademark “bedtime” gesture.

Game over. Series Over. On to the East.

Rookie Moses Moody has been a steady, solid presence for the Warriors in the last few games of the WCF. He hit a shot-clock buzzer-beater last night, as well as a big-time three-pointer. (Photo by Ezra Shaw/Getty Images)

When individual Warriors were asked, “What does this WCF win means to you?” it seems like many of the answers gravitated toward Klay Thompson’s return to the Warriors’ lineup in January, mid-way through the season.

“We saw what [Klay] went through these last two years,” Steph Curry said during the trophy presentation. “Every single day rehabin’, grindin’, putting his body back on the line to be back out here… for this moment.”

The many “MVP” chants for Steph Curry through the season came to fruition last night. Curry was presented with the first-ever ‘Magic Johnson Trophy’ for Most Valuable Player of the WCF. (Photos by Ezra Shaw/Getty Images)

At the on-court, postgame interview, a reporter asked Klay Thompson, “You’re back in the NBA Finals for the sixth time in eight years. [Drink.] How does it feel?”

“It’s just hard to put into words, man,” Thompson, visibly choked-up, said. “I dreamt of this day during some dark days.” At the postgame press conference, Klay said: “This time last year, I was just starting to jog again, and to get up and down the court. And now, to be feeling like myself, feeling explosive, feeling sure in my movements . . . I’m just grateful.

“But, as soon as Game 6 of that series starts tomorrow, it’s time to flip the switch,” Thompson said, referring to the Eastern Conference Finals, where the Boston Celtics lead 3-2, and will host the Miami Heat tonight. “It’ll be much sweeter if we can complete the mission come next round.”

Almost there . . . Klay Thompson spoke at length on Thursday about the grueling, boring and dark days of rehab, and said that it was moments like last night that he’d envisioned to get him through. (Photo by Ezra Shaw/Getty Images)

For me, Draymond Green best summarized the comparison to this year’s WCF win, and chance to play for the NBA Championship, vs. other years. “I must say, this one — it feels totally different; although it hasn’t truly set in yet, I feel more gratitude, more appreciation for this moment,” Green said on his podcast. “After missing the playoffs for two straight years, and understanding that this isn’t guaranteed, and understanding how hard it is, truly, to accomplish, I feel more appreciation for the moment.

“It doesn’t make it better than the others. You appreciate the journey for each one of these things. I appreciate the day-to-day — just how tough it is — more so than getting the actual trophy.

“Lifting the trophy up is cool, but it’s the process that you appreciate the most.”

Tune in for a Finals’ preview next week.