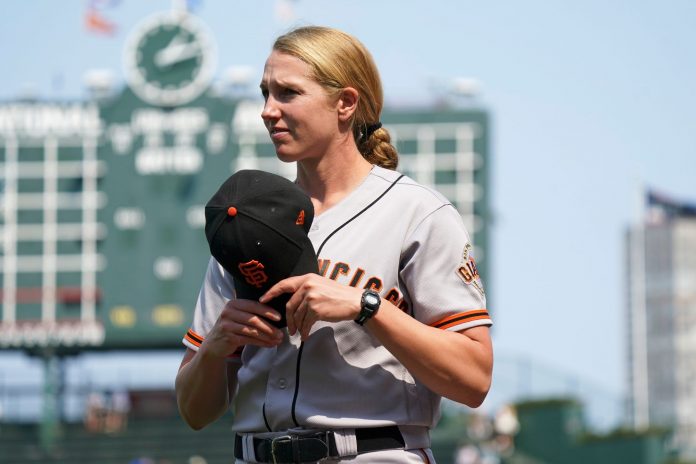 Sports history was made last night at Oracle Park in the third inning, as the Giants were up 10-1 over the San Diego Padres.

Assistant coach Alyssa Nakken took the field to coach first base, receiving a round of applause from the crowd to commemorate the first time a woman made an on-field appearance during a regular season Major League Baseball game. (Nakken was replacing coach Antoan Richardson, who was ejected for allegedly giving directions to outfielders, according to Sports Illustrated.*)

Alyssa Nakken at first base with the Giants Mauricio Dubon during last night’s game against the San Diego Padres. (Photo by Ezra Shaw/Getty Images)

Nakken’s appearance last night built on a series of firsts for the 31-year-old college softball star. She was hired as an intern with the Giants in 2014, and named an assistant coach before the 2020 season, making her the first woman in the MLB to serve as a full-time coach. That same year, Nakken became the first woman ever to coach on-field during an MLB exhibition game.

“I look forward to the day it’s not a big deal that a woman is on the field of a Major League Baseball game,” Nakken told Yahoo Sports in 2020.

“The game of baseball isn’t discriminatory, it’s more the mentality: Do you have the strength and talent to be at this level, regardless of gender? I feel pretty strongly that baseball isn’t discriminatory on gender, but a lot of people think girls can’t be coaches. It’s kind of silly. My insecurities are: I’m kind of young and haven’t coached at the Major League level before. It’s never because I have a ponytail.”

Born and raised in  Woodland, California, Nakken is an alumna of Cal State Sacramento, where she was named to the All-Pacific Coast Softball Conference four years in a row; she was named conference Scholar-Athlete of the Year in 2012. Nakken also has a masters in sports management from the University of San Francisco. She worked in health and wellness programs for the Giants, and was also the team’s chief information officer before she was promoted to a full-time assistant coach in early 2020, marking the first of her many firsts.

Nakken joins a growing list of pioneers. “Over the past few years, a handful of women have been hired in managing, coaching, and professional roles in men’s pro sports,” The Cut reported in 2016. The NBA currently has six female referees on its full-time officiating staff; the first female refs were hired by the league in 1997.

In 1977, Lusia Harris became the first woman to be officially drafted by the National Basketball Association; her life was recently memorialized in the Oscar-winning, Stephen Curry-executive produced documentary The Queen of Basketball. In 1992, Manon Rhéaume played a preseason game as the Tampa Bay Lightning’s goalie, marking the first time a woman had ever played in a men’s professional sporting event in any major American sports league.

*After last night’s Giants’ game, ejected first-base coach Antoan Richardson told reporters that he had been responding to comments that had “undertones of racism,” according to Yahoo Sports.