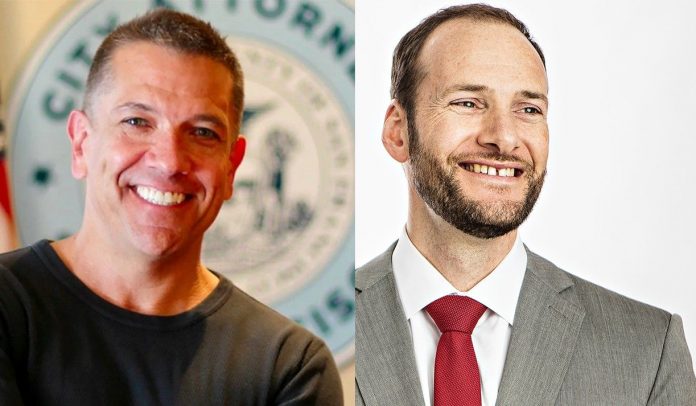 The new supervisor who was on the SFPD payroll up until last month has, very unsurprisingly, endorsed the recall of the district attorney whom the SFPD hates with a white-hot passion.

Newly appointed District 6 supervisor Matt Dorsey was the SF cops’ top PR spin doctor (that is, “director of strategic communications”) up until last month, having started in January 2020. That start date coincides with the inauguration of SF District Attorney Chesa Boudin, and the reform-minded Boudin and the SFPD have been at odds more or less from the get-go. The fact that Boudin has aggressively prosecuted alleged police misconduct cases, and blew the whistle on a use of rape kit DNA scandal, only created more headaches for then-SFPD director of strategic communications Matt Dorsey.

And now it may be payback time. In a Tuesday op-ed for SFGate, Dorsey announced he is supporting the recall of DA Chesa Boudin.

“Here’s where District Attorney Boudin himself made it impossible, in my view, for any conscientious supervisor representing District 6 neighborhoods like SOMA, Mid-Market and Civic Center to support his retention,” Dorsey writes at SFGate. “‘Most of the residents that I speak with aren’t particularly upset that there are drug sales happening there,’ DA Boudin explained to the Washington Post last February.”

Dorsey continues: “Early in his tenure, District Attorney Boudin challenged the San Francisco Police Department (where I until recently served) to do better. ‘I need the police department to bring me kilos, not crumbs,” he said, for cases he could prosecute against drug dealers.”

“With ‘crumbs’ as deadly as fentanyl, I felt, the drug dealers trafficking them on our streets deserve to be held accountable,” he concludes.

I’m not sure endorsements even matter in politics anymore, unless it’s a Trump endorsement in a super-red state with a three-way race. (Supervisor Stefani has also endorsed the recall, Supervisors Chan, Mar, Peskin, Preston, Ronen and Walton have opposed the recall.) And it seems unlikely that the brand new Sup. Dorsey, still an unknown commodity to most of the public, commands any huge amount of influence with voters. But it’s another drip-drip of momentum against Boudin, and in the final week of a race where he’s presumably polling behind, it certainly doesn’t help Boudin’s case.