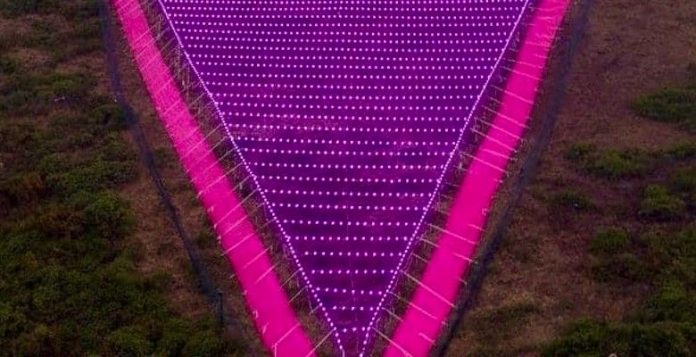 This Pride Month of boycotts and counter-boycotts starts with Wednesday night’s Pink Triangle lighting ceremony, with prominent LGBTQ organizations refusing to attend in protest of Mayor Breed, and Breed countering with some trans homelessness legislation.

This being June 1, the annual SF Pride Month celebrations will begin as they have for two years with the ceremonial lighting of the Pink Triangle on Twin Peaks. (In pre-pandemic years it had been an installation of pink tarps that only went in on Pride Weekend, but in 2020 it became an LED-illuminated affair, visible at night, with its own lighting ceremony.) Last year’s event, while shrouded in fog, was a feel-good celebration with a marching band and Nancy Pelosi saying kind words. But this year… maybe not such a feel-good event!

The LEATHER & LGBTQ Cultural District stands in solidarity with @transdistrictsf, @Castrolgbtq, and @SFPride following the decision by the Mayor to stand in alliance with the San Francisco Police and the Police Officers Association by boycotting the Pride Parade and Celebration. pic.twitter.com/TGlUaH7VVr

It’s the first of the city-sponsored events that several LGBTQ organizations will boycott over Mayor London Breed’s own boycott of the SF Pride Parade — a decision she made over SF Pride’s new policy of not allowing police officers to march in the parade in full uniform. As the SF Leather & LGBTQ Cultural District said in a Tuesday statement, “The LEATHER & LGBTQ Cultural District joins the Transgender District and the Castro LGBTQ Cultural District in refraining from participation in the Mayor’s Pride Month Ceremonial Flag Raising Ceremony and all other City and County of San Francisco Pride Month celebrations until the Mayor reverses her decision and instead shows support for the entire LGBTQ+ community.”

Really bummed about our cop-loving Mayor hitting the button to turn on the Pink Triangle. I was looking forward to attending for the first time, but I have no interest in being at any Queer event she decides is worth her time when Pride is beneath her unless done her way.

The Pink Triangle lighting ceremony is not explicitly named in that statement. But Mayor Breed is the person slated to flip the light switch at 9 p.m., according to an official schedule. And there’s plenty of chatter on social media that Breed’s presence alone makes this event a no-go for her siding with the Police Officers Association in this debate.

#SanFrancisco's three #LGBTQ cultural districts have said that they will not attend Mayor @LondonBreed's ceremonial #Pride2022 flag-raising ceremony Thursday because of her decision not to march in the parade. https://t.co/vNiNkVa7Og

As the Bay Area Reporter reminds us, the official SF City Hall Pride flag-raising ceremony is tomorrow, Thursday, June 2, at 1 p.m. The Transgender District already said last week that their cohort would sit out that event in protest of Breed choosing the cops’ side — and in an open letter, the head of the discussed how Pride itself has its origins in protest riots stemming from police mistreatment of LGBTQ people.

Today I announced my 5-year plan to end transgender homelessness in San Francisco, which includes investing in programs that support and create real long-term change in the lives of transgender people. @SF_HSH @SF_DPH @sfmohcd @TransCitySF https://t.co/mdEPEx01TS

June 1 is not only the beginning of Pride Month, it is also (on or around) when the San Francisco mayor traditionally releases the annual two-year city budget. Breed just did, and KRON4 reports that she’s made a show of announcing a $6.5 million plan to end transgender homelessness in the city. The centerpiece of that plan, according to a press release from Breed’s office, is “$6 million over two years dedicated to fund short-term rental subsidies, flexible financial assistance, and support to build capacity among non-profit providers serving [transgender and gender nonconforming] residents.”

The timing of the announcement is probably no coincidence, as Breed has just consciously picked a fight with SF Pride, and opposing Breed is now a de facto stance of the progressive segments of the LGBTQ community. In what also may be an olive branch, or perhaps a cynically thrown dog bone, the Bay Area Reporter also adds that Breed’s new budget contains a $35,000 “Drag Queen Laureate” position for the city.

Many of the biggest names at Wednesday night’s 8 p.m. Pink Triangle lighting ceremony are straight people, or presumed “allies.” Breed is doing the lighting, and Nancy Pelosi will also be there, according to the official announcement. They also have trans Jeopardy! champion Amy Schneider speaking, a Dykes on Bikes contingent will appear, and Donna Sachet is scheduled to speak. But it is otherwise a who’s-who of Breed’s centrist political allies — including Supervisor Matt Dorsey and City Attorney David Chiu (both Breed appointees), State Senator Scott Weiner, and Supervisor Rafael Mandelman. In other words, this ain’t exactly a Stonewall riot.

But it does begin our very unusual 2022 Pride Month of boycotts and counter-boycotts (and probably counter-counter-boycotts too). Though given the conformist direction Pride has been going the last couple decades, maybe some discord and dissent just what this Pride Month needs.