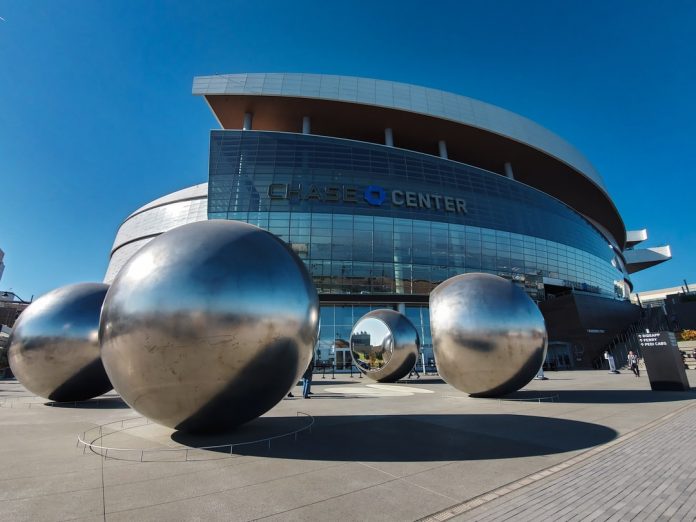 Over at Thrive City, the Kaiser-named collection of shops and restaurants adjacent to the Chase Center, one big-name tenant is canceling their plans to move in.

Local chef and restaurant empire builder Michael Mina, whose planned food hall was supposed to be an anchor tenant of the Thrive City complex, is pulling out of the complex in what may be just another sign of the times in a shaky economy.

“As a result of COVID, we have shifted our priorities and are focused on reinvesting in our current restaurants,” a rep for the Mina Group tells the Chronicle this week.

That list of current restaurants is over 40 names long, and in San Francisco it includes International Smoke — a partnership with Ayesha Curry — Pabu, and takeout-focused operations Mina Family Kitchen and Tokyo Hot Chicken, which operate out of those two larger restaurants, respectively.

The original plan, which SFist first learned of in early 2020, was for something listed as High Energy Food Hall, and it was meant to occupy a massive, 16,000-square-foot space at Thrive City featuring multiple chefs in rotation and three full-service dining areas. It sounds like an ambitious undertaking, and perhaps one that still doesn’t make total financial sense as the restaurant industry continues its recovery.

The existing food businesses in Thrive City may or not yet be thriving. Tyler Florence’s upscale steakhouse Miller & Lux, which opened last year, has a lot of positive reviews on Yelp, but like other restaurants in the complex is likely at its busiest only when there’s a concert or Warriors game happening in the arena next door. A quick check for reservations finds a fair number of tables still up for grabs this weekend.

Chase Center management has been trying to activate the Thrive City plaza as much as possible this summer, with bimonthly comedy nights in July and August, outdoor movie nights, weekly fitness classes, and “Health & Wellness Sundays.”

Gott’s Roadside president Clay Walker says that Gott’s Thrive City location has done well on game nights, but he was disappointed to hear of Mina pulling out of the complex and said they still hadn’t reached a “critical mass” of businesses.

There are two wine bars getting set to open at Thrive City: GluGlu, a new operations from the married sommelier couple Rebecca Fineman and Chris Gaither who own Ungrafted in Dogpatch, and Mission Bay Wine Bar from Debbie Zacharias, one of the owners of Ferry Plaza Wine Merchants. And Harmonic Brewing has a brewpub that Zacharias said felt “electric” during the Warriors’ playoff run.

Thrive City is also home to locations of Philz Coffee and Dumpling Time, as well as a full-service Chase Bank location.

But multiple spaces in the complex still remain vacant. The Warriors issued a statement to the Chronicle saying “While the pandemic altered our initial timeline, like many other businesses, we are actively compiling a dynamic, multifaceted Thrive City portfolio, and look forward to sharing more information.” The rep did tell the paper that there are no plans for a replacement food hall, but the hunt for another anchor tenant is clearly on.