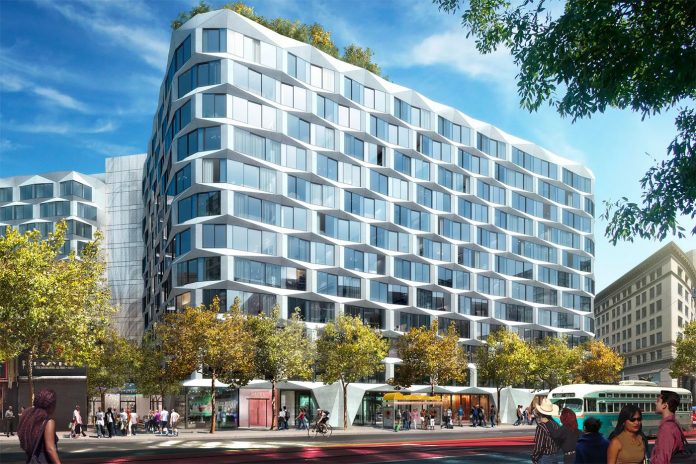 There’s finally some movement over at The LINE hotel, in the condo-hotel building known also as Serif, and 950-974 Market Street — and we have some vague details about the rooftop bar/restaurant going in about a block away from Charmaine’s.

The delayed LINE hotel, from the management group that also runs the NoMad properties in New York, London, and elsewhere, was slated to open last year, and then delayed until this past spring, and now until early fall. As Eric Tao, managing partner and co-founder of the developer L37, told the SF Business Times last year, “It doesn’t make sense to open a hotel this year,” adding that they were waiting for the return of tourism and conventions.

Now, as Eater reports, we have word on what’s happening with the ground-floor and rooftop restaurants, the hotel bar, as well as a coffeeshop that sounds about as trendy as the hotel group.

The bar, we’re told via press release, is going to be a “classic hotel lobby bar called Dark Bar.” That will be joined by a restaurant called Tenderheart with “thoughtful, sophisticated flavors,” and the rooftop lounge called, curiously, Rise Over Run — ugh is that a math reference? Both will be led by executive chef Joe Hou, a former pastry chef who has worked in the kitchens of New York’s Per Se and the NoMad, as well as Palo Alto’s Bird Dog and SF’s Le Fantastique — both kitchens headed by chef Robbie Wilson.

The release was vague on the actual concepts for the rooftop and ground-floor restaurants, so we’ll see! Things could still be very much in development as the hotel prepares to open, ostensibly, by September 30.

We do know that cocktail programs in the restaurants and Dark Bar will be created by Danny Louie, a vet of Mister Jiu’s, Chino, and The Alembic. In Dark Bar, there will be a mix of “unique takes on quintessential cocktails embellished by unexpected bar snacks,” the PR team says.

The scene on this part of Market Street remains a bit of a circus of drug-dealing and erratic behavior, and this developer — along with the IKEA mall team across the street, and the long-suffering Proper hotel — have been banking on a tipping point arriving at some point so tourists feel more welcome. We wish them luck.

And if Rise Over Run can give nearby Charmaine’s a run for its money, that’s probably a good thing. With so few rooftops available for drinking in these parts, Charmaine’s enjoyed a bit of special status in the pre-pandemic days, despite being pretty expensive with pretty chilly customer service. (Don’t get me started on the velvet rope and “wait here” theatrics they were doing on a slow Tuesday night for no reason, and the $75 bill minimums they started trying to enforce last year.) Hopefully the elevator situation won’t be so tortuous, and maybe it’ll be a nicer place to hang out!