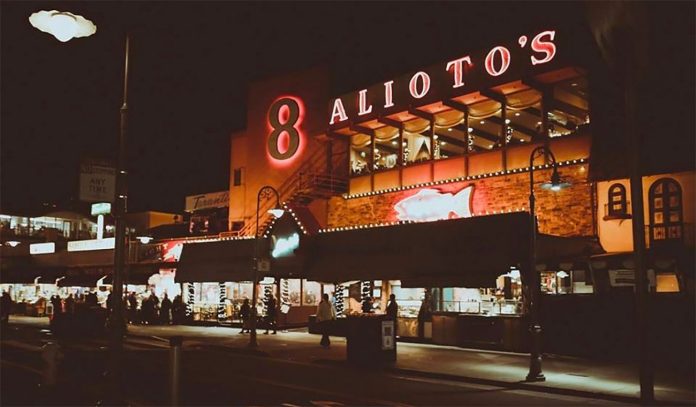 One of San Francisco’s Oldest Restaurants, Alioto’s, Is Closing After a Century at Fisherman’s Wharf

Alioto’s, the quintessential Fisherman’s Wharf seafood spot with a giant number 8 on its facade commemorating the fish stall that Sicilian immigrant Nunzio Alioto Sr. once ran nearby, is giving up the ghost after temporarily closing two years ago.

We all kind of knew that not all of tourist-centric Fisherman’s Wharf was likely to make it through a two-year pandemic. But now we learn that a big casualty is Alioto’s, the almost-100-year-old, stalwart restaurant at 8 Fisherman’s Wharf. The restaurant has been dark since March 2020.

The SF Business Times broke the news, after the restaurant’s landlord, the Port of San Francisco, revealed they had struck a deal to let Alioto’s out of its lease, which still had over 14 years on it. That was a 66-year lease that was signed back in 1970, by the way.

“The loss of Alioto’s — a renowned Fisherman’s Wharf icon — is heartbreaking for the Port and the generations of San Franciscans and tourists that have enjoyed the Alioto’s dining experience,” said Randy Quezada, the Port’s director of communications, in a statement. “Their contribution to the Port and the city will not soon be forgotten.”

Alioto’s, sometimes called Alioto’s No. 8 because of the sign, began life as a fish stand in 1925, later moving to Stall #8 at the wharf and slowly growing into a full-fledged restaurant by 1938. Nunzio Alioto Sr., the proprietor, died in 1933, but the business was taken on by his children — his daughter Rose opened the full-service restaurant in 1938 and is credited by the family with creating the fish stew called cioppino — and the buiness stayed in the family ever since.

As the Business Times notes, assuming that the lease termination agreement gets approved, this will avoid the messier fate of another longtime Wharf restaurant, Castagnola’s. The Port sued Castagnola’s in September after it ceased paying rent and did not seek any rent-relief program help either. Back in 2020, the Port agreed to forgive rent for around 200 of its tenants, and was only requiring that restaurants pay a percentage of their monthly sales, as per existing agreements.

Thankfully, other Wharf stalwarts Scoma’s and The Franciscan are still hanging on and are back open.