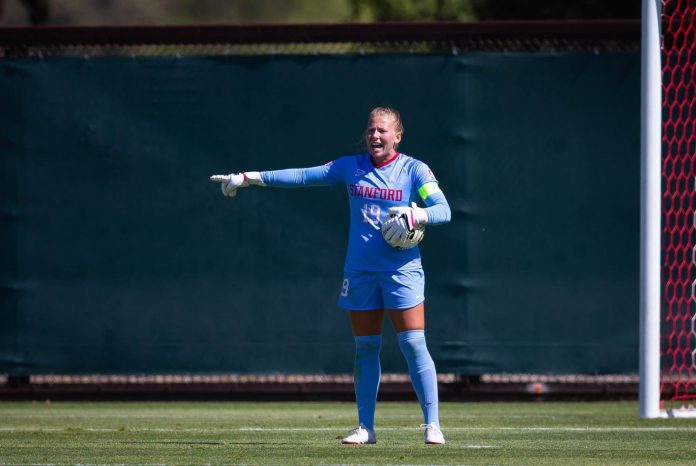 Star goalie Katie Meyer won the Stanford Cardinal women the 2019 NCAA with heroic saves in a shootout, but was found dead in her dorm Tuesday. She was 22.

Stanford students knew something was wrong when ambulances and police cars were gathering around the dormitory Crother Hall on Tuesday morning, and by the afternoon the Stanford Daily reported that an unnamed undergraduate student had died. But an email to students from Vice Provost Susie Brubaker-Cole said that “In honoring the family’s privacy, we cannot yet share the student’s identity nor can we share the cause of death.”

Katie Meyer, the captain of the Stanford women’s soccer team, has died. She was 22 years old.

"There are no words to express the deep sadness we feel about Katie Meyer's passing," Stanford AD Bernard Muir said in a statement. https://t.co/5oKsaxC80w pic.twitter.com/NRnxypl9L9

As of Wednesday, we now know the student’s identity, and this is not just any student. KPIX reports that the student was 22-year-old star goalkeeper Katie Meyer, captain of the Stanford women’s soccer team, who won her team the NCAA national championship in 2019 with two saves during the game’s shootout.

The Stanford Daily al reported that, while a cause of death has not been publicly discussed, a police officer on the scene called the death as “a medical emergency.”

The Stanford community has suffered an unimaginable loss. Our thoughts & love are with Katie’s family & friends. ❤️ pic.twitter.com/3qXOyx7atO

“It is with great sadness that we report that Katie Meyer, a senior majoring in International Relations and minoring in History, a Resident Assistant, and a team captain and goalkeeper on the Stanford Women’s Soccer Team, has passed away,” Stanford officials said in a statement. “Please join us in offering our deepest condolences to her parents and sisters. We would also like to extend our heartfelt condolences to Katie’s friends, hallmates, classmates, teammates, faculty and coaches.”

A cause of death has not yet been announced.

As you see above, Meyer was not just an exceptional goalie, but also a talented trash talker whose gift for theatrics won her notice on Sportscenter scores and highlights. You can watch the video of Meyer’s 2019 title-winning saves here.

The Quakes send their thoughts and love to the family, friends, teammates and loved ones of Katie Meyer.

We will never forget her incredible performance in the 2019 College Cup at @PayPalPark. Your legacy will live on forever. pic.twitter.com/XeNLL7iyxa

Meyer was an inspiration who broke other boundaries, and was the first female placekicker on her varsity football team in Newbury Park. She’s survived by an older sister Samantha and younger sister Siena, and her parents Steven and Gina Meyer.

This is the second high-profile death of a student on the Stanford campus in the last two years. 19-year-old Eitan Weiner, a first-year student at the time, died in February 2020 from an accidental fentanyl overdose, which came from a counterfeit prescription pill he took. Weiner’s parents, both longtime Stanford professors, filed a wrongful death suit against the university in January.