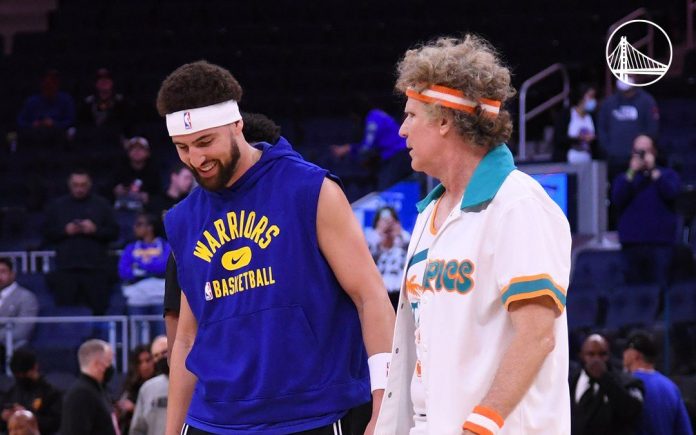 Last night, the Golden State Warriors got a much-needed boost from the bench, a jolt of joy, and a strong dose of defense to snap their season-long five-game losing streak, bringing smiles back to players and fans alike.

Jackie Moon, a Will Ferrell character from the 2008 movie Semi-Pro, surprised the Warriors when he took to the Chase Center court during last night’s pre-game warm up. Ferrell was decked out in the 1970s-style orange and aqua green “Flint Tropics” uniform, complete with short shorts, tall socks, big hair and a headband. The Warriors went on to beat the Clippers 112-97, resurrecting their top-of-the-league defense and finding a light at the end of a tunnel.

Klay Thompson — who has been in a slump, and who has been the source of endless speculation among fans, analysts and even teammates about when he’ll consistently be back in elite form — said that Ferrell’s appearance last night was a spark that lit a fire. “I’m not going to say he was responsible for the win tonight, but I think he was a huge catalyst for why we came out guns blazing,” Thompson said in the post-game press conference. “I’m very appreciative that Will could come out and lighten the mood, especially after the losing streak we had.”

Thompson added, “That was so much fun — some of the most fun I’ve had on the court this year.”

You may recall that Thompson did a little cosplay on Halloween 2018 when he dressed up as Ferrell’s Jackie Moon. And he says that his love for Semi-Pro helped him emotionally during his arduous, 941-day recovery. “During my rehabilitation, when I would have some dark days, I would just put that movie on and it would make me smile. I’m very thankful for that film.”

The Will Ferrell cameo at Chase Center had apparently been in the works for some time. The actor had emailed coach Steve Kerr “a while back, and I didn’t believe it was him,” Kerr said at the post-game interview last night. “So we exchanged a couple of emails and concocted the plan. [Ferrell is] a huge Klay Thompson fan, and he knows how much Klay loves dressing up as Jackie Moon, so it was just a natural fit and felt like a good time to do it — just to make everyone laugh in a tough stretch of the season.”

(At the post-game press conference, a reporter asked Stephen Curry, “How much can a fun pre-game like that, with Will Ferrell taking the court and surprising you guys, lift the mood/lighten the spirit?” Curry said, “It can go either way. When we lost five straight and you add that to the mix, you get a little distracted. But I think we fed off the energy. It was good vibes.”)

Now 20 games into his long-anticipated, widely celebrated return to the Warriors, Thompson’s performance has been streaky, and analysts have dissected the five-time all star’s every move and mood, wondering what it all might foretell — especially with the playoffs on the horizon. Averaging 16.5 points a game, Thompson has been the highest-scoring player in NBA history who has returned after missing two full seasons because of injury, according to The Ringer.

Thompson’s season highs include a 33-point game against the Los Angeles Lakers in February, where he shot nearly 55% in a Warrior’s 117-115 win. One of his season lows also came against the Lakers on Saturday in a heartbreaking 124-116 loss, where Thomson shot 23%, and seemed visibly frustrated during the game. “There’s a fine balance to who he is as a basketball player, who he is as a shooter and a scorer that he has to figure out,” Steph Curry told reporters in LA after Saturday’s loss. “We got to support him, and try to put him in a position to be successful, and stick with him.”

Since his return, Thompson is shooting around 37%, the first time in his career in which his “effective field goal percentage is worse than the league average,” The Ringer said. “Some rust is perfectly understandable after so much time away — even for a player with one of the most gorgeous, repeatable shooting strokes in league history.” Also since his return, Thompson has been firing more three pointers than at any point in his career. “And that’s not necessarily a change for the worse,” The Ringer said, noting that prior to this season, Thompson ranked 65th in three-point attempts. Thompson is also taking more pull-up three-point attempts, though the majority of his shots are still catch-and-shoot.

Given the Warriors’ recent defensive struggles, Thompson’s “D” has been closely watched, and is considered critical to the Warriors’ playoff success. In last night’s win over the Clippers — where the Warriors held  LA to just 36 points in the first half — Thompson had apparently requested to guard the Clipper’s best perimeter players.

“Why did you request the toughest defensive assignment? Why do you feel comfortable doing that?” a reporter asked Klay in the post-game press conference.
Thompson answered: “Prior to these 20 games, I have not felt that responsibility for a couple of years. I always love to challenge myself defensively. I knew it was going to take some time — and is still going to take time — before I can be that two-way force that I am. Why not start now?”


In a statistic that you might be surprised exists, “Thompson has lost a small but consistent amount of arc on his three-pointers,” The Ringer said. “In both the 2017-18 and 2018-19 seasons, Thompson averaged around 46 degrees of arc on his three-point attempts, but this season, he’s down to 44.1 degrees. (The optimal angle is 45 degrees.) Against the Lakers last weekend, his average arc angle was just 41.8 degrees — more than four degrees below his pre-injury baseline.”

“He needs more knee-bend,” said Warrior’s analyst Kelenna Azubuike last night as Thompson struggled with his shot early in the game. “He can’t buy a shot,” said play-by-play announcer Bob Fitzgerald. (Both quotes are paraphrases.) But Thompson found some rhythm late in the game, and ended the night with 20 points. Azubuike and Fitzgerald noted that it only takes a few made shots for a player of Thompson’s caliber to ignite. Even after struggling — or perhaps specifically because of the frustration of a scoring drought — every Warriors’ fan seems to be ready for Thompson to break out.

As the media continues to hang on Klay Thompson’s every shot and wonder about the complexity of  his evolving recovery, last night was a reminder that fun and joy define the Warriors’ play.

And everyone seemed to be having fun last night.