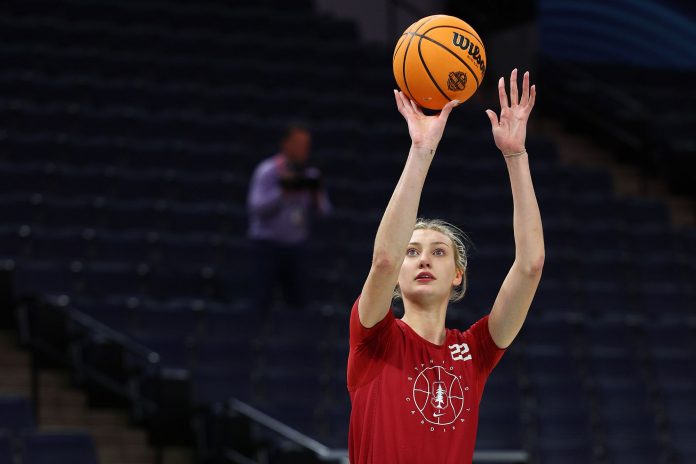 As Stanford Cardinal star Cameron Brink takes the floor tonight against UConn in the NCAA Final Four, another Bay Area basketball dignitary, who is still nursing an injury, will be watching at home.

“It’s pretty awesome having watched her grow up in the game,” Stephen Curry, who is Brink’s god-brother, said in 2021. Curry said he’s enjoyed watching Brink “just come into her own as a talented high-school prospect, and as a highly talented freshman at Stanford.” Now a 20-year-old sophomore and defending champion from last year, Brink is the leading scorer and rebounder for the Cardinal.

As a young woman, Cameron Brink “was mainly interested in drawing pictures and wearing dresses,” according to the Mercury News. Courtesy the Brink Family

Cameron Brink has enjoyed watching Steph Curry come into his own, too. She was just eight years old when Davidson — Curry’s alma mater — was playing in the Sweet 16. Before the game, she told Curry, “If you believe in yourself, you can be somebody,” Shelly Bain-Brink, Cameron’s mother, told the Mercury News. Bain-Brink said she still gets choked up remembering that moment.

“Steph is a goal-oriented, confident person,” Bain-Brink told ESPN in 2017. “And I see that developing in Cameron more and more all the time.”

The Brink/Curry roots were sowed decades ago at Virginia Tech, “where Shelly played basketball and Sonya [Curry] played volleyball, and they became roommates. Their future husbands, Dell Curry and Greg Brink, both basketball players, lived in the men’s wing of their dorm,” the Mercury News said, adding that the families remain close, and that for Stanford home games, the Brinks travel from their Portland, Oregon, home and stay with Steph and Ayesha Curry. “Cameron and her boyfriend, Stanford rower Ben Felter, are frequent dinner guests as well.”

There are also numerous videos online showing Brink hanging out with the Curry kids.

“She lives about eight minutes away from me — it’s pretty cool that things have aligned like that,” Curry said in the 2021 interview, adding that, when the Warriors were in Portland to play the Trail Blazers, he caught a few of Brink’s games at Southridge high school. “She’s skilled and talented, and as she sprouted up in her height, she kept that skill.”

Shelly Bain-Brink told the Mercury News that one of her favorite photos of her daughter and Steph features the two standing back to back — Cameron was 12, and just under 6’3″. Two years later, the 6’4″ Brink “eclipsed” the 6’2″ Curry. “There’s no surprise why she’s made a smooth transition to the college game dealing with the physicality and speed, because she can shoot and she can dribble. She can do it all. I’m excited for her.”

Cameron Brink practiced yesterday at the Target Center in Minneapolis, Minnesota for tonight’s semi-final game against the Connecticut Huskies. Photo by Elsa/Getty Image

CNN said that tonight’s Stanford v. UConn game is “the real Final Four game you should watch,” because it features two of the NCAA’s most successful college basketball coaches, with Tara VanDerveer helming the Cardinal, and Geno Auriemma calling the shots for the Huskies. “VanDerveer has coached on the collegiate level for over 40 years and has 1,157 victories to show for it,” CNN reported. “She’s lost only 258 games, which means her teams have won nearly 82% of the games she has coached. Auriemma, who turned 68 last month, has slightly fewer wins (1,148), but he’s arguably been even better than VanDerveer. He’s lost just 149 games over 37 seasons, which means he’s won nearly 89% of the time!

“These two coaches are leading their teams in a sport which I’m not sure many people understand is quite popular and has actually gotten statistically more exciting over the last decade,” CNN’s Harry Enten wrote.

Women’s basketball was in the Hollywood spotlight last Sunday, when The Queen of Basketball won the Academy Award for Best Documentary Short. The film was executive produced by Shaquille O’Neal and Stephen Curry. (Yes, Stephen Curry has won an Oscar.)

“If there is anyone out there that still doubts whether there’s an audience for female athletes, let this Academy Award be the answer,” said Queen of Basketball director Ben Proudfoot on Sunday.

Oh yeah, as for Steph’s own basketball career, it was just announced that the Golden State Warriors’ superstar will miss the remainder of the regular season after being diagnosed with a sprained ligament in his left foot,” according to CBS. “The plan is for Curry to continue his rehab and begin individual on-court activities next week, with his eventual return to practice based on his continued progress.”

Curry will reportedly be reassessed on April 11.

Facebook
Twitter
Pinterest
WhatsApp
Previous articleWarriors Bringing K-Pop Star BamBam to Perform at Regular Season Home Finale, Which Hopefully Ends Their Skid
Next articleGiants Season Preview: Once Again, No One Gives Us a Chance Except Us