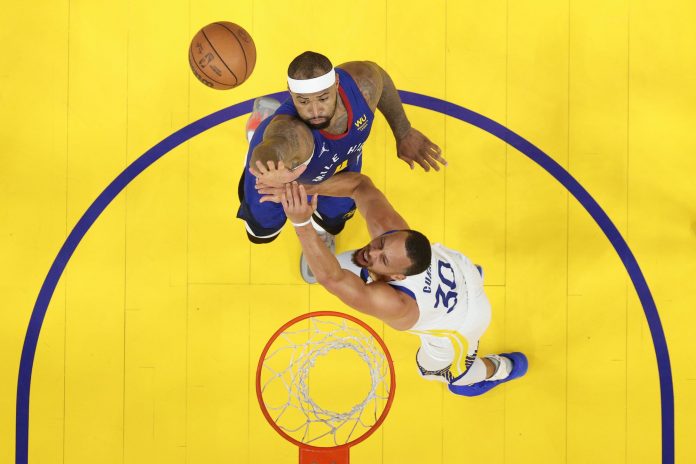 The Warriors, Looking In Fine Playoff Form, Overpower the Nuggets In Games 1 and 2

Even after the completion of a strong but bumpy season, and even with a third-place seeding headed into the playoffs, there were still questions surrounding the Golden State Warriors — both from the media machine claiming that the three-time champions’ best days are behind them, and from anxious fans, like me, who have dreams of triumph, glory, and watching the Warriors compete well into June.

First on the list of uncertainties: When would number 30 return? Frantic, daily Googling of “Stephen Curry injury” revealed nothing but numerous stories about the definite possibility that upon a series of reevaluations, there was, maybe, maybe, maybe a chance that the Warriors’ superstar might play in Game 1 on Saturday.

Exactly one month to the day after suffering a foot injury, Stephen Curry returned to center stage at Chase Center. “This is a weird injury because it’s such a slow healer,” Curry said on The Draymond Green Show last week. “But the goal has always been Game 1. We know what time of year it is. I’m so freaking juiced because I love [the playoff] environment.” (Photo by Ezra Shaw/Getty Images)

Tuning in to Game 1 of round one against the Denver Nuggets on Saturday, Steph was on the floor and in uniform, and just like that, it was as if he was never gone. Within minutes, all of the anxiety over his health had vanished as quickly as it had accumulated. And all of the existential pondering around whether the Warrior dynasty was over, or just on hold, no longer mattered, nor did the obsession over rough patches, streakiness and concerns over a lineup that had been riddled with injuries. The voices of the prognosticators, trolls, and armchair experts were finally drowned out by a nation eager to cheer on a playoff run.

Game 1 got off to a slow start, and there seemed to be some nerves. Klay Thompson’s first three-point attempt was an airball. Curry, who didn’t start but came off the bench about halfway through the first quarter, looked understandably rusty; it was a while before he fired his first shot, and a while still before he made one. (The Warriors rank 17 out of 30 in the league in first-quarter scoring; Denver ranks fourth.)

Steph Curry and Kevon Looney guard Nikola Jokic in the first half of game one on Saturday. (Photo by Ezra Shaw/Getty Images)

It wasn’t long, though, before the Warriors found a rhythm. Klay started nailing threes. Jordan Poole picked up right where he left off in his red-hot end to the regular season. Steph hit a few threes. Draymond Green and Kevon Looney were putting in the work against Nuggets’ superstar Nikola Jokić. The Warriors were up by five, then 10 and 13, then the Nuggets cut into into the lead a little, but the Warriors ended the first half of Game 1 with an 18 to 4 run in four minutes. They would go on to handily win the game 123 to 107.

Last night’s 126-106 Warrior win was a near rinse-and-repeat of Saturday, right from the slow start, to the explosive end of the first half, to a massive third quarter — the Dubs scored 32 and 44 points in the third respectively in Games 1 and 2.

“Does the phrase ‘riding a bicycle’ mean anything?” the ABC announcers said on Saturday. “It’s come back real quick: recall, muscle memory — whatever you want to call it. It’s working for the Warriors.”

It does feel familiar, doesn’t it? It’s a show that we had seen before, a tune that we recognize, and that was stuck in our heads in the mid-to-late 20-teens. As the shots started to fall in Games 1 and 2, there was a feeling of inevitability.

Well, let’s just pump the breaks. (This writer might have already jinxed the Dubs once before.) No one expects the climb to the NBA mountaintop to be easy — nor even the remainder of round one against the Nuggets. The West is stacked with several scary-good teams.

But Games 1 and 2 have certainly been a good way to kick things off.

“It was a great way to start the postseason,” said Klay Thompson after Saturday’s game one win. “We needed a night like this just to feel like we could play together. It was the first time we’ve almost been whole in years.”

Klay Thompson — who scored 19 points in game one and 21 points in game 2 — flashes “The Goggles” during last night’s win over the Nuggets. (Photo by Ezra Shaw/Getty Images)

At Saturday’s postgame press conference, a reporter asked both Klay and Steph a variation of the question: Even though it’s just one game, did getting an unequivocal win over Denver bring back any swagger, and bode well for what lay ahead? Both Thompson (answering in the quote above) and Curry stipulated that it was indeed only one game, but that, yes, it was a most excellent inauguration.

“For the guys that have been there and understand what that journey is like at this stage of the season in a playoff chase, yeah, you start to kind of think about what’s next,” Steph said on Saturday. “But it’s also a reminder that this group hasn’t done it yet. So, no conversation in our locker room, our practices or our preparation is about anything other than how do you win Game 1; how do you win Game 2 — that’s the only way that we’re going to get to where we want to go.”

Curry recalled the Warriors’ 2015 playoff run, where they swept the New Orleans Pelicans 4-0 in the first round, but were down 2 games to 1 against the Memphis Grizzlies in round two, before fighting back. “[We] had to face a little adversity. So you know that’s coming at some point.”

Jordan Poole, who is playing in the post-season for the first time in his young career, scored 30 points in Game 1 and 29 points last night against the Denver Nuggets. Poole has had one of the highest-scoring playoff debuts in NBA history. (Photo by Ezra Shaw/Getty Images)

How are the Denver Nuggets dealing with adversity? The Warriors seem to have gotten under their skin a little. Former Warrior DeMarcus Cousins was ejected after a double technical in Game 1. Cousins has been outstanding off the bench substituting for last year’s Most Valuable Player — and likely MVP of this season — Nikola Jokić. Last night, the Nuggets’ bench built a 12-point lead over the Warriors in the first half, before the Dubs went on a 26-8 tear to close the second quarter.

‘Joker’ had near-identical performances in Games 1 and 2, scoring 26 with 11 rebounds on Saturday, and scoring 25 with 10 rebounds last night. But then things got chippy. Jokić was ejected in the fourth quarter after his second technical foul — both Ts were apparently earned for complaining to the referees. “I think I got fouled in the moment because I heard the slap,” Jokić said of a no-call against Draymond Green that preceded the Nuggets’ star’s exit.

That feels familiar, too, doesn’t it? Draymond gets into someone’s head, and racks up the unquantifiable statistics that make him a presence on the court. It’s the kind of scrappiness that can only come when stars do battle in a multi-game series. It’s the playoff vibe.