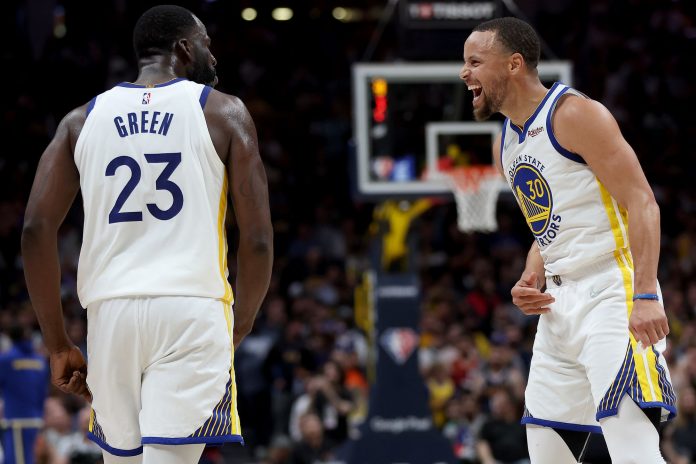 Warriors Win a Tight Game 3 Against the Nuggets, Stand on the Precipice of a Sweep

“It’s always difficult to win Game 3,” said the Golden State Warriors’ Draymond Green after last night’s 118-113 win over the Denver Nuggets. “When a team is down 2-0, they come out and they give you everything they got in that Game 3. And if you’re able to take that punch and come out with a win . . . you set yourself up well.[If] you’re up 2-0 and you get Game 3 on the road,  you put yourself in a pretty good position to get a sweep.”

After decisive and similar-looking wins in Games 1 and 2, the Warriors had to grind it out last night in Denver, 5,280 feet above San Francisco Bay.

Both teams came out swinging. The Warriors shot 60% in the first quarter, the Nuggets 55%. Golden State was up 34-32 after the first quarter. NBC analyst Kelenna Azubuike said something to the effect of, “It’s the most beautiful scrappy game ever.”

This fourth-quarter scramble for the ball between the Warriors’ Stephen Curry (bottom, if you didn’t know) and the Nuggets’ Nikola Jokić exemplifies the scrappy nature of Game 3. (Photo by Matthew Stockman/Getty Images)

The high-scoring grind continued into the second quarter, with the teams trading baskets, and neither able to pull away. The Nuggets’ Nikola Jokić, who Draymond Green said played an “incredible” game, scored 37 points, shooting 14-22 from the field and nabbing 18 rebounds with his massive 6’11” frame. After being held to under 10 points in Games 1 and 2, the Nuggets’ Aaron Gordon scored 18 last night with 12 rebounds. Former Warrior DeMarcus Cousins was lethal off the bench, and made his way to the rim with ease in the first half of the second quarter.

Eventually, the lineup of Curry, Green, Andrew Wiggins, Otto Porter Jr., and Gary Payton II cracked the game open a little, with GP2 hitting multiple big-moment threes — he had 11 points, and shot 100%, with three rebounds and one steal. After Wiggins hit a three, the score was 60-49 Warriors, with 4:30 left in the half.

It’s happening again,” said Azubuike of the Nuggets’ second-quarter performances through the series. “They’ve been getting demolished.”

Like the rest of the Warriors, Jordan Poole has been lethal from distance, but has also driven to the basket with impunity, often blasting past Aaron Gordon (above, #50). Still, the Warriors were outscored 40-46 last night in the paint. (Photo by Matthew Stockman/Getty Images)

Surely knowing that their playoff lives were on the line, the Nuggets went on a 10-2 run and cut the lead to 63-59 with a minute to play in the half — and this against the so-called ‘Death Line-Up’ of Curry, Poole, Thompson, Wiggins and Green. “This is a Win for Denver,” said NBC Broadcaster Bob Fitzgerald in the dying minutes of the first-half. “They’re outplaying the group that beat them up in Games 1 and 2.”

The momentum in playoff basketball seems to swing wildly at times, no? Through the end of the second quarter, both the Warriors and Nuggets  seemed on the verge of either ex- or imploding at any moment.

The Nuggets got a steal from the Warriors with about a minute left, but missed the shot. Steph took the rebound all the way to the rim and dished it to Klay on the wing, then stealthily trotted to the top of the three-point arc and fired a three under pressure.

On the next trip to the other end, Jokić missed a three, but raced to break up a pass to a wide open Warrior at the other end (“Joker” had three steals on the night); the Nuggets had another possession with 25 seconds to play. Denver missed on a drive to the rim, Draymond got the rebound and fired a long outlet pass to Steph, who took it to the rim, stopped, pumped, shot, made it, and got the foul.

It was 69-59 and the half, and one could almost hear the sound of a balloon leaking air in Denver. “[Shooting] 52% from the field for the Nuggets, and 60% from three, and you’re still down 10?” Azubuike commented.

Klay Thompson takes it to the rim against the Nuggets’ Will Barton last night in the second quarter of Game 3. (Photo by Matthew Stockman/Getty Images)

But Denver dug deep again, and had their best quarter of the series in the third, outscoring the Warriors 30-18 to make it an 89-87 game heading into the fourth. The Warriors held a small lead through much of the final quarter, but never pulled away — there were  something like 11 ties on the night.

Then came the play of the game. With the score 116-111 with 40 seconds left to play, and the Nuggets hanging on by the skin of their teeth, Denver inbounded to Jokić — who was being guarded by Draymond — for what everyone in the building presumed would be a quick drive and two-point attempt.

“On the first dribble when he hit me, I still felt like I had inside position,” said Green in the postgame interview. “And then he took the second one, and it was far away from his body, so I was already thinking right there, if he takes one more dribble, I’m stabbing at it. I felt like my body [was] released enough where I could get a reach in and still be in good position.”

Draymond stole the ball, and that leaking-balloon sound that the Nuggets had admirably avoided suddenly filled the thin, high-altitude air of Ball Arena in Denver.

Despite his consistent high-scoring performances, Nikola Jokić seemed visibly bothered by the way the Warriors have defended him, and the way the officials have called the games. (Photo by Matthew Stockman/Getty Images)

“We knew that they were gonna come out with a punch in the second half, and that’s what they did,” Curry said in the post-game interview. “I’m proud of the way everybody played and competed. In the playoffs, every game is a little bit different — especially when you go on the road.

“Can you find a way to just make enough plays and win the game? It doesn’t have to be perfect or pretty. You just have to compete.”

Facebook
Twitter
Pinterest
WhatsApp
Previous articleFeral Cats Overrun Oakland Coliseum, Authorities Decide to Just Let Them Have Their Run of the Place
Next articleAirbnb Ending Their Refunds for COVID-19 Cancellations