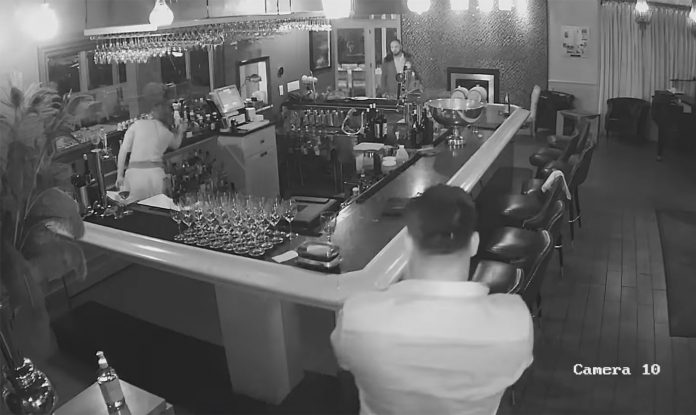 Classy Crew Swipes $4,000 Bottle of Cognac on the Way Out of San Jose Steakhouse, Sheriff Investigating

A group of 10 people who were dining last week at at an upscale steakhouse in San Jose appears to have wanted to take a special souvenir with them — and it was a very expensive bottle of booze.

You have to be pretty drunk not to be worried that there are cameras watching your every move these days, but a gaggle of folks who had just enjoyed a $1,600 dinner at Mt. Hamilton GrandView steakhouse, on the slopes of Mt. Hamilton just outside of San Jose, appears to have sent the most daring among them on a mission to grab a bottle of hooch for the road. And as the Santa Clara County Sheriff’s Office now tells us, the female suspect who did the deed decided to grab what was probably the most expensive bottle behind the bar, Rémy Martin’s Louis XIII cognac, which retails for around $4,000.

It seems like the restaurant probably would have had someone’s name or credit card from this table, but perhaps they paid in cash. Otherwise, why would the sheriff’s office be seeking the public’s help to ID anyone in the surveillance footage below. This all happened Tuesday night, March 8, at 10:37 p.m.

“Can you identify anyone in the above video?” the sheriff’s office asks in a Facebook post. “We are asking for the public’s assistance if anyone can identity the female subject and/or other individuals above regarding the felony grand theft of a $4,000 bottle of alcohol.”

From the way the group is behaving, it sort of seems like the woman who steps behind the bar had a plan, and there were at least two guys playing lookout before she headed out the door with the stuff.

No employees were in the bar area at the time.

“This was very well-choreographed. This was like a hit,” says the restaurant’s manager, speaking to KTVU.

The manager told KTVU that the group had just finished a meal totaling $1,600. Maybe they didn’t think they got their money’s worth?

Now that lady caught on camera, and perhaps her accomplices, are wanted for grand theft.