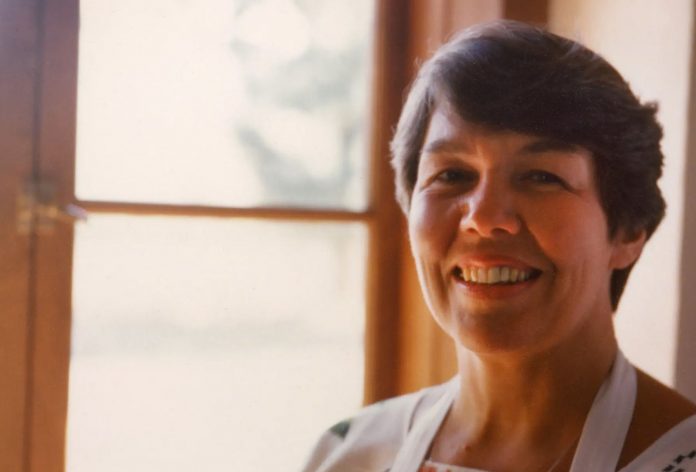 Sally Schmitt, Original Chef at The French Laundry, Has Died at Age 90

A Bay Area legend in her own right, Sally Schmitt will be remembered as a pioneer of California Cuisine, before such a thing was even being talked about. Schmitt died at her home in Philo on Saturday at the age of 90.

Much like Alice Waters, Sally Schmitt and her husband Don sought to open an unpretentious restaurant in a California style, built around seasonal produce, that nonetheless leaned heavily in the direction of France. After a few years running a burger stand in Yountville and then opening a restaurant of her own called Chutney Kitchen, Sally and Don bought the crude stone building on the main drag in town that had once been home to a French steam laundry as well as a saloon, deciding to turn it into a restaurant with personality. In 1978, it opened as The French Laundry, and they would go on to run the place until 1994, when they sold it to Thomas Keller.

Keller has always been quick to credit Schmitt as his forebear, even though he would go on to take The French Laundry in a much different — and more haute — direction. As the New York Times notes in an obituary today, Keller penned an introduction to Schmitt’s forthcoming memoir and cookbook, titled Six California Kitchens: A Collection of Recipes, Stories, and Cooking Lessons From a Pioneer of California Cuisine.

“Kind and generous, forthright, and unpretentious,” Keller writes. “A culinary pioneer but also a throwback, preparing dishes that evoked the most delicious versions of your favorite childhood meals. That is the Sally we all came to know.”

Keller clearly took some inspiration from Schmitt — upscale spins on “your favorite childhood meals” would become something of a signature of Keller’s food.

“If anyone knows what California Cuisine is, it was her,” says Cindy Pawlcyn, the chef of Napa’s nearby Mustards Grill and a former chef at SF’s pioneering Fog City Diner, speaking to the Chronicle. “She was cooking when everyone was starting to get it into food. She kept it Americana, California, local and farm-to-table.”

And former Chronicle critic Michael Bauer, who enjoyed the Schmitts’ restaurant before Keller arrived, called Schmitt “a true pioneer” not only for being a female chef in a male-dominated sphere, but also for offering an all-California wine list, and for starting the trend of the automatic 15% service charge.

Longtime wine industry folk in the Napa Valley will remember a time when you couldn’t really get a great meal in Napa to go with the valley’s increasingly world-class wines — everyone went to San Francisco if they wanted a good dinner. Schmitt tried to rectify that, first with monthly dinners at Chutney Kitchen that later became weekly Friday five-course menus paired with Napa wines — which, as the Chronicle notes, “laid the foundation for the French Laundry.”

Schmitt was a master of rustic, French country fare, and her lamb shanks were the stuff of legend — her daughter Kathy Hoffman tells the Chronicle that long before Keller was seen as putting the place “on the map,” food-world stars like Julia Child and Jeremiah Tower had to pull strings to get a table at Schmitt’s French Laundry, which grew into a major hit.

As Schmitt told the LA Times in 2020, “I didn’t have a mission. I wasn’t trying to prove anything to the world about simple, fresh, local food. It was just the way I cooked. I didn’t really have a statement to make. I just put food on the table.”

Schmitt was also never a fan of technology, preferring to do things the old-fashioned way, even in a busy restaurant kitchen. In the new books, she writes, “I’ve always tried to keep it simple, which is why I’ve never felt the need to use a food processor or microwave. Instead, I’ve had good sharp knives, pots and pans, a big chopping block, a wooden spoon and a whisk. I’ve always loved to work with my hands. It’s what cooking is all about.”

Kathy Hoffman told the Chronicle that the most important lesson she took away from her mother was to make the most out of each meal, and each day.

“She instilled in me a lifelong passion of living every day amongst beauty that you create yourself,” Hoffman said to the paper. “You can go on a trip, you can have a fancy car, but what is most important is the quality of life that you live every day.”

In her book, Schmitt wrote, “All in all, I really have done just what I loved to do, which has always been simply to cook good food for those I cared for. That’s what mattered. That’s all that mattered.”

Top image: Courtesy photo from the Schmitt Family, via the New York Times

Facebook
Twitter
Pinterest
WhatsApp
Previous articleMarlowe Reopens In SoMa, Burger and All
Next articleClassy Crew Swipes $4,000 Bottle of Cognac on the Way Out of San Jose Steakhouse, Sheriff Investigating